An effort to preserve the original Little Singer School gathers steam … too late? 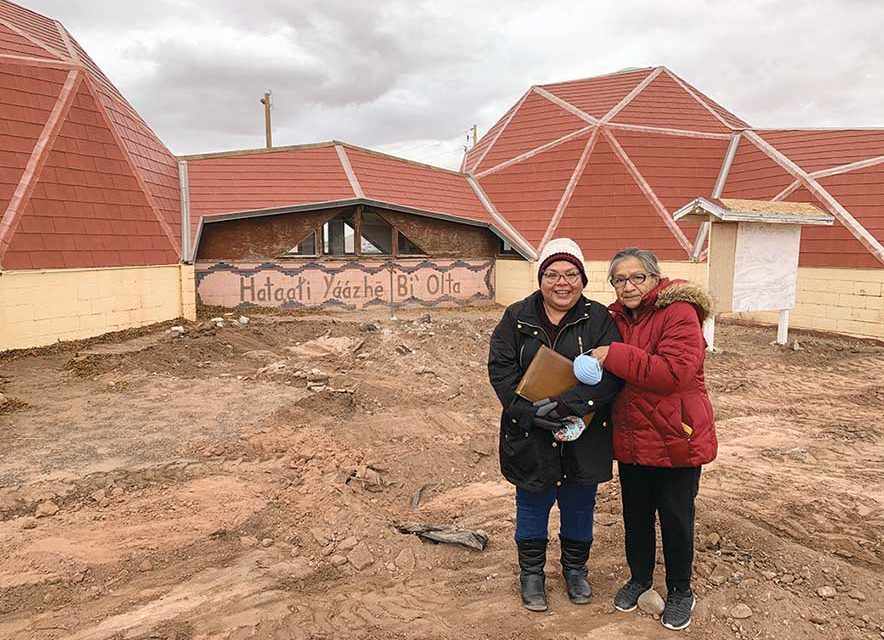 Navajo Times | Cindy Yurth
Danita (left) and Anita Ryan stand in front of the original Little Singer Community School. The women, along with other survivors of the late Tom Ryan, who designed the school, are trying to preserve it.

In two weeks, if all goes according to plan, the iconic double dome of the original Little Singer Community School will feel the wrecking ball.

With the building will go 42 years of prayers, dreams and memories — the legacy of a community that took its fate into its own hands, and the vision of two men. The grandson of one of them heads the construction company tasked with the demolition. The widow and children of the other have launched a last-ditch effort to save it.

Several miles in on a dirt road, the recently completed new school building stands in front of the old, eclipsing it like a six-foot-tall supermodel in front of a hunched grandmother. Its circular shapes clearly draw inspiration from the geodesic domes of the old building. Without a doubt, it is Little Singer 2.0, designed for state-of-the-art education, spacious and comfortable.

But in the hearts of the tiny, close-knit community of Birdsprings, it will never replace the school they built themselves. Memories (sub) “So many prayers, so many community events, so many weddings took place here,” sighed Anita Ryan, widow of the late Tom Ryan, who designed and helped build the school, as she sat inside one of the connected red geodesic domes, perhaps for the last time, last Friday.

Anita herself was married to Tom here, and taught here for many years. Her own children went to school here. One of the domes has been stripped of its contents; inside the other are strewn plastic bags of craft materials, seasonal decorations, and, oddly, a bunch of old shoes. Still, there’s a lingering feeling of peace and comfort inside the structure, even with a damp winter breeze sweeping across the featureless plain the school rises from. “That’s because of all the prayers that were said here over the years,” explained Danita Ryan, Anita’s daughter.

Davina Two Bears, Danita’s sister, has a Ph.D. in anthropology and teaches at Fort Lewis College in Durango. Davina was 10 or 11 when her mother pulled her from the BIA boarding school in Tuba City and enrolled her in the newly opened Little Singer School in 1978. “It was the happiest time of my life,” she recalled, “and not just because I could walk to school and walk home.

“I was taught to read and write my language, which they didn’t even teach in Tuba at that time,” she said. “They brought in elders from the community to teach us various things about the culture. I learned the Yei bi Chei dance, I learned the song-and-dance two-step. All my classmates were Navajo! It was so special.”

Today, all reservation schools are charged with teaching the Navajo language and culture. But back in the early 1970s, when Tom Ryan arrived in Birdsprings, that idea was revolutionary. Ryan, a bilagáana, was living on a ranch adjacent to the reservation. Some people called him “the hippie,” but he wasn’t a hippie. He was a graduate student from California looking for a quiet place to write his dissertation.

“He had answered a newspaper ad to be a caretaker for the ranch,” Anita recalled. “The owner wasn’t living there and needed someone to look after the place.” According to Anita, Ryan didn’t realize he was going to be a close neighbor to a Native American reservation. “He had no idea about Navajos,” she said, “but when he started meeting his neighbors, he became curious and learned as much as he could about our culture.”

Not very many people had a car at the time, and Ryan was often asked to drive people places. One time he was tasked with driving Anita’s young cousin to boarding school. The child howled as Ryan and her family dropped her off and drove away. Ryan was horrified. “Why do the kids have to be taken so far away to school?” Anita remembers him asking. Someone explained that there were no schools in Birdsprings.

“I think that was probably the first seed of what he would later do for the community,” she said.

Ryan also struck up a friendship with the town’s medicine man, Hataali Yazhi, or Little Singer. Neither spoke very much of the other’s language, but they would sit together for hours. They somehow learned to communicate. Hataali Yazhi told Ryan that not only did the kids hate going away to school, but the town felt grim and dead without them.

“He explained to Tom that, in our culture, the community needed the laughter of the children to maintain its balance,” Anita said, “and the children needed to be around their parents to learn their culture and how to be helpful in the home.” Little Singer offered to donate some of his land if Ryan would build a school for the community.

After experimenting with several designs, Ryan, a physicist, chose the geodesic domes for their strength and ease of construction, and also because they resembled hogans, Anita recalled. An accompanying A-frame structure was set atop a pile of rocks.

“My dad designed a really innovative solar heating system,” said Robert Ryan, Tom’s son from a previous marriage, who had accompanied his father to Birdsprings as a tow-headed toddler and grew up there. “The solar panels in the school heated the rocks, and a forced-air system blew the hot air into ducts in the domes.”

There was no electricity in Birdsprings at the time, so Ryan set up a pair of windmills to generate power. “The windmills were a bone of contention in our community,” admitted Anita. “They kept getting struck by lightning. The traditional people didn’t like them. We had a lot of ceremonies for those windmills.”

“My stepdad was into sustainability before anybody on the rez — in fact, the country — was talking about it,” said Danita proudly. Community rallies (sub) The whole community rallied to build the school. The men did the construction while the women cooked over outdoor fires to keep everybody fed.

A bread oven was built at the construction site and volunteers baked bread and sold it to raise money for the construction materials. Ryan brought in a crew of students from Foothill College, where he was teaching in California.

At one point, the project — financed mostly by Ryan himself, his father, and the Hewlett-Packard Foundation — ran out of money and the college students passed the hat to keep it going, Anita recalled. Little Singer, unfortunately, did not live to see the project completed. But to this day it bears his name, and three generations of his descendants attended there.

According to Robert, Tom Ryan tried to get the BIA to back the school. “The school was built with zero assistance from the BIA,” he said. “They were too entrenched in the boarding school system.” Eventually, the BIA (and its successor in the education field, the Bureau of Indian Education) did take over the school. In 2004, the school’s governing board petitioned the government for a new school building, which was finally completed last fall and has not yet been fully occupied because of COVID.

Ryan’s family was happy to see the new school, “but it didn’t occur to us the old school would be torn down as part of the project,” Danita said. Anita happened to be at the school for a different matter on Oct. 28 when she ran smack into the dedication ceremony — to which, she said, she had not been invited.

“That was the first time I heard the domes were going to be torn down,” she said “It’s just unbelievable they didn’t consult with the community on this. Nobody wants them torn down.” The family quickly organized a presentation to the school board, including a petition on change.org that as of Monday afternoon had 55,592 signatures, to plea for the domes to be preserved, perhaps as a community museum.

Little Singer Principal Etta Shirley did not return a phone call Monday and a phone number found online for school board President Leslie Williams was no longer valid. According to Ryan’s family, the board told them the building was beyond repair, dangerous and would be too expensive to insure.

“It doesn’t make sense,” observed Danita. “They had kids in there until the pandemic started.” School has been mostly online since then.

Robert decried the board’s failure to maintain the building over the years. “The skylights had been leaking for years,” he charged. “They had done no repairs to the roof. The wood is rotting because it was never painted. Who doesn’t paint something for 40 years?”

Davina, the anthropologist, is pursuing historical designation for the building, but admits there’s little chance it will come through within two weeks, when the structure is scheduled for demolition.

Harry Singer, Little Singer’s grandson and CEO of Keyah Construction Inc. — the company that built the new school and is charged with the demolition of the old one — has reportedly told the family of his granddad’s old friend that he’ll save the domes until the very end, demolishing the other, less historic buildings around them first. But that won’t buy much time.

Robert, who lives in California, has been out to the site to take pictures and measurements and document as much as he could. “I have enough information to construct a scale model of the school,” he said. “The question is, where would we put it?”

The area the old school now occupies is going to be turned into a playground. At the very least, Robert says, they could put a granite boulder with a plaque at the site.

Danita says she’s trying not to be too attached to the building; after all, her stepfather’s and Little Singer’s dream was realized, and that’s the important thing. “The greatest thing our dad contributed to the community is not this building,” she said. “It’s the fact that families can stay together and not be separated. No one can take that legacy away from us.”