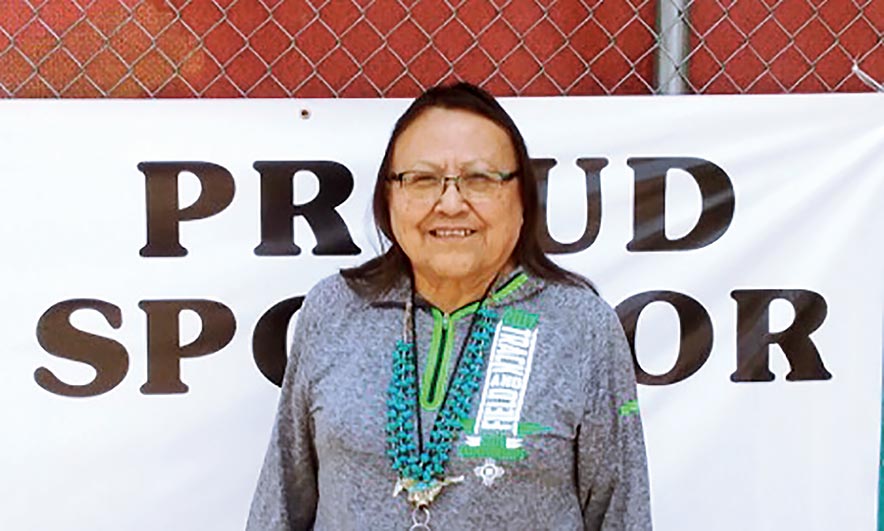 On Oct. 13, Beverly J. Coho won the prestigious Bernard S. Rodey Award from the University of New Mexico, which recognizes outstanding alumni whose leadership efforts have contributed significantly to the education field.

Coho, 70, from Ramah Chapter, has dedicated her life to leadership in education in many areas to improve the quality of life for her people and all citizens.

“I felt humbled to receive the award,” said Coho. “I understand Bernard Rodey was a hard worker. He appeared to be an all-around person – an educator, legislator, and judge who served locally and nationally. I thought if somebody is going to think of me in those terms, I am thankful.”

Rodey is often referred to as the “father of the university” for his work in drafting the bill that founded UNM in 1889.

Coho graduated from UNM in 1973 with a bachelor’s degree and is currently a master’s candidate in public administration.

She believes that education has been the key to her success in almost every discipline in which she has excelled over her 50 -year career, which includes 30 years with the Navajo Nation government where she worked in several leadership positions such as division director for human resources and public safety.

“I was really happy and honored for the award, but I’m not much of anything without my family, my hard-working colleagues and my staff members,” said Coho. “It’s only because of their support, help and understanding of me that I’ve worked this long. I share my award with all of them.”

Coho is also firmly rooted in her traditional Navajo way of life, theories and language, which she learned from her grandparents and her clanship group.

“In my belief, I have to have a balance in life,” she said. “I stand very strong on my Navajo principles and practices.”

She believes teaching and sharing knowledge with others is a duty paramount to advocating for: business development to alleviate poverty, health programs to minimize health disparities, student learning to eliminate illiteracy, public safety to reduce crime, training of human resources to decrease unemployment, voter rights to increase voter engagement, and fighting elements of family dysfunction in order to improve quality of life.

“What ties this whole thing together, regardless of what discipline or position you’re in, whether executive leadership or support, education is what transcends everything,” she said. “I think it’s everybody’s role and responsibility to educate others, to bring other people up and not leave them behind.”

Coho said she is forever indebted to her clanspeople who came before her who selflessly instilled their values in her.

“There’s no going somewhere by yourself,” she added. “To excel, you have to carry your people, bring them along with you, not just to improve family, community or tribe, but the whole Nation as well.”

Coho believes the COVID-19 pandemic is a good example of how everyone had to work together and share their knowledge in order to take care of their families, friends, and humanity as a whole.
“Fundamentally, we all know that kindness, love and education is what gives rise to the beauty of humanity and makes us all kindred souls,” she said.

Coho, now semi-retired, is vice president of the Ramah Navajo School Board Inc. and president of the Albuquerque Area Indian Health Board Inc., which serves 27 tribes, nations, and pueblos in New Mexico, Colorado and western Texas.

Representing AAIHB, she is also a member of the National Indian Health Board along with President Jonathan Nez, who represents the Navajo Nation.

Coho works as a volunteer voter rights coordinator for Cibola County in New Mexico where she encourages people to participate in Democracy by staying informed and exercising their right to vote.

Coho was inducted into the New Mexico Women’s Hall of Fame in 1991.

In 2018, Coho was a keynote speaker at the International Healing of Spirit World-Wide Conference in Sydney, Australia, where aboriginal and indigenous people of the world gathered to learn how American Indians became successful at fighting sugar diabetes through education, treatment and turning back to their traditional foods.

To young people pursuing their education and careers today, Coho advises it doesn’t matter what discipline you pursue or what position or at what level you serve – education is foremost.
“We are a very unique people, coming from the tribal atmosphere,” said Coho. “If we’re able to latch on to our Navajo upbringing and bring it together with our non-Native upbringing, we can touch the lives of many people.”