Arielle Platero and Julie Nelson are the first cohort for a new program at Los Alamos National Laboratory.

Working with Fort Lewis, the program supports undergraduate indigenous women interested in a career in physics.

It is offered to two women per year majoring in physics at Fort Lewis College and aims to build a pipeline of talent from the undergraduate level in the Four Corners region to graduate programs and eventual careers in physics, including at national laboratories such as Los Alamos, located northwest of Santa Fe. 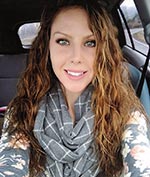 Astrid Morreale, a physicist at the Los Alamos lab, said, “Indigenous women are the most underrepresented group in physics degree completion and careers, and we’re in a region where the demographics are heavily Native American.”

Platero said, “As a Navajo woman in the STEM field, I am very excited to work with the Los Alamos team, because it gives me an opportunity to contribute to and to help pave the way for new and exciting physics discoveries.

“I am looking forward to continuing on this path to graduate school and to representing my tribe and showing the younger generation that we can do great things if we apply for these opportunities and put in the work.,” Platero said.

Nelson said, “This internship and the research I am privileged to participate in will be the first steps I take in pursuit of a career in physics. Obtaining the knowledge no longer seems out of reach because of this opportunity.

“I am thrilled to get hands-on experience at Los Alamos National Laboratory and explore the research side of academia while collaborating with scientists and mentors about the contributions of nuclear and particle physics that can benefit humanity,” Nelson said.

The students will receive year-round mentoring from laboratory physicists in the course of their education at Fort Lewis College.

The program includes a 10-week internship in Los Alamos and a two-week visit to CERN, the European Council for Nuclear Research.

Students will also be able to participate in the American Indian Resource Group that promotes access to Native American resources and a sense of community and inclusion while learning about high-energy nuclear physics at the Los Alamos lab.

FLAGSTAFF – For the first time in two years, Northern Arizona University will officially be back in the J. Lawrence Walkup Skydome to celebrate the fall graduating class.

Two ceremonies will take place: 10 a.m. and 3 p.m. on Friday to celebrate nearly 2,800 students who have applied for graduation. Doors will open 90 minutes before each ceremony and a clear bag policy will be in place.

The 3 p.m. ceremony will celebrate graduates of the colleges of arts and letters, health and human services, social and behavioral sciences, and the W.A. Franke College of Business.

If you are planning on attending one of the ceremonies, plan for extra time to get to the ceremony. For those unable to attend in person, they will be live-streamed on NAU-TV.

Thirty-four Diné teachers and educators are fellows in the program, which is a partnership between area schools and the university.

The NAU institute aims to strengthen teaching in schools serving Navajo students through professional development. The program offers teacher growth and fosters cultural and content knowledge between the partners.

In a keynote address, President Jonathan Nez said, “Just as our ancestors persevered through hardships and adversities, our Navajo people, including our teachers and students, continue to strive forward during this pandemic.”

First lady Phefelia Nez said, “Teachers who demonstrate a love for learning often pass this passion to their students in the classroom. As you continue on this path of being a life-long learner alongside your students, remember that you are impacting the lives of future generations to come.”

SHOW LOW, Ariz. – Among the many scholarships given at Northland Pioneer College, an additional $10,000 will be awarded by the new AndyVon Transportation Grant for Native American students in January.

To qualify for the $1,000 grant, students must be Native American, reside on tribal lands, and commute at least 30 miles one way to attend at least one in-person class at an NPC campus or center in the spring 2022 semester. Applications from eligible students will be accepted beginning Monday, Jan. 3.

SHOW LOW, Ariz. – Among the many scholarships given at Northland Pioneer College, the Jon Graff Ph.D. Scholarship Fund provided $500 each to Ashlyn Dighans of Chinle for the University Bound Scholarship, and Lila Taylor of Snowflake for the Career and Technical Education Scholarship.

Dighans is working toward her associate at NPC and plans to transfer to the University of Arizona to study veterinary science. Her ultimate goal is to become an equine chiropractor.

Although the Pedal and golf tournament were modified or canceled for the past two years due to COVID-19, support of NPCFF donors has not only sustained these scholarship funds but allowed the foundation to increase the award amount from $500 to $750 for the spring 2022 semester.

“In our first academic year, 2014-15, we awarded a little less than $20,000 to 21 students,” explains Friends and Family Executive Director Betsyann Wilson. “It is so gratifying to see this kind of growth.”

A total of 118 applications were submitted for 13 different scholarships. Per Friends and Family board policy, each applicant may win no more than two scholarships per semester, and awardees will receive the two most valuable scholarships from among those for which they have applied.

Fifteen of the applicants received two scholarships, and every applicant received at least one scholarship award.