Nike designer’s advice: Just do it 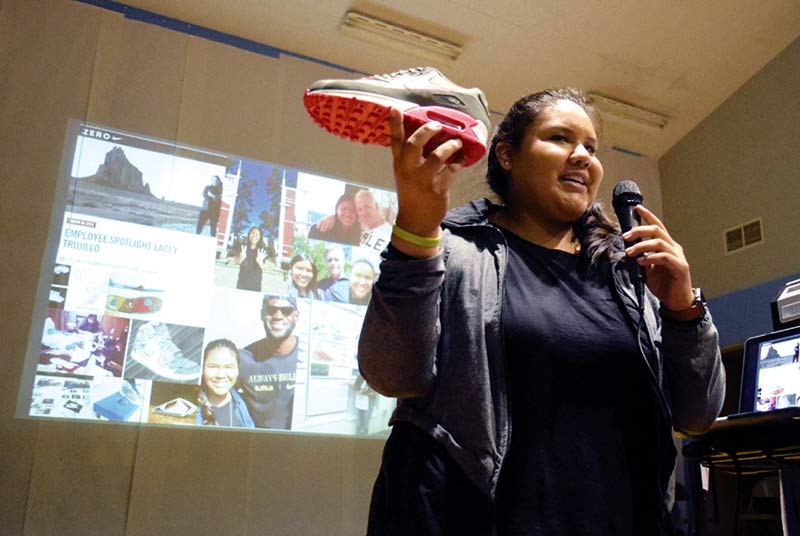 Being the first Native American female designer for Nike does not keep Lacey Trujillo from giving back to her former high school.

Last month she shared the auditorium stage with two other Arizona State University scholars, Brian Skeet and Raveena Benally, to share their careers and educational journeys in design in hopes of inspiring Window Rock High School students to pursue their passions after high school.

“I want to inspire people to get off the reservation to learn more about what this world has to offer, and to come back to teach and bring awareness to what Native students don’t know,” Trujillo said to the Times. “Such as design. I didn’t know about it and I had to go on a long route because I didn’t have anything like this (presentation) to teach me.”

Her journey to becoming a designer began with when she was a little girl.

“I started out, you know, just really fascinated with shoes ever since I was five or six years old,” said Trujillo. “Throughout my life I never thought I could be a designer.”

Trujillo’s presentation highlighted the lack of design programs and classes available to her in high school. This ultimately contributed to her decision to switch her major from architecture to industrial design after her first semester at Arizona State University in 2010.

Her mother and high school mentors were concerned about the change in Trujillo’s career path but she was determined to be a shoe designer.

“Nothing told me inside that I couldn’t do this or this was wrong so I did it,” Trujillo said. “This is what I want and I fought for it.”

The Nike designer said she received initial support from her middle school shop teacher, Mr. Hale, and high school architecture teachers Marilou Joson and Marcus Forrester, who saw her potential and encouraged her to pursue design.

“She stuck to Nike and Michael Jordan since she was five,” Cynthia said. “She knew what she wanted to do and went for it. As much as I would love for her to be home, I am so proud that she is independent and just going for her dream.”

On top of giving advice to students about the importance of maintaining connections with teachers, network building, and perseverance in academics, Trujillo brought with her 15 Nike sports apparel items such as shoes, backpacks, clothing, and water bottles to give out to students.

Students were asked to submit their best sketches to qualify for a free Nike item. Approximately 60 sketches were submitted and were judged on originality and skill.

Trujillo sparked admiration after she shared her stories and had photos taken with famous athletes whom she has met through her job. Among them are NBA stars such as Kevin Durant, LeBron James, Steve Nash, and the NFL’s Odell Beckham Jr.

By the end of her presentation, hope seemed to have been restored for students attending a school they believe is limited. High school professional sales teacher Tyrell Harvey debunked that belief by announcing, “You have students from this school that are doing amazing things.”

He added, “They are competing with the best students in the state and they are winning.”

While pointing to Trujillo, Harvey said, “She determined that she was going to go places. Lacey works for Nike. She made it happen.”

Trujillo is a 2010 graduate of Window Rock High and plans to give presentations to other reservation schools. If you would like for her to present at your school she may be contacted via email at lacey@laceytrujillo.com.