The U.S. government has historically dominated and controlled the use of Diné Bikéyah through its claim of possessing “trust title” and that its Congress has exclusive “plenary power” to regulate and dispose of this land as it wishes, regardless of the Diné, the original sovereign. 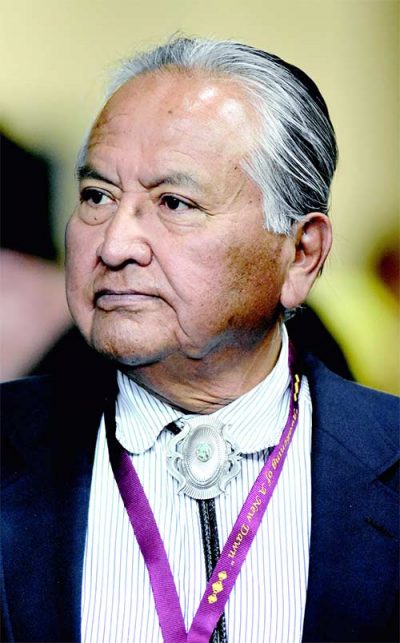 This claim of absolute power originates from a concept now embedded in American federal Indian law that dominion and control was a right gained by the white Christian societies upon their “discovery” of this land and because the indigenous people of this continent, the original inhabitants, were uncivilized heathens who could only be mere occupants and could not have the property rights of a true sovereign.

The U.S. Supreme Court came up with the “Christian Discovery” doctrine in the 1823 case Johnson v. McIntosh to justify and legitimize the theft of indigenous lands.

Many different methods under ever-changing policies have been used over the years against indigenous nations – war, genocide, removal, termination – to dispossess them of their lands.

Throughout this sordid history of over 400 years, the original free Native nations have always rejected the white man’s notion of the superiority of this legal premise and that it should govern the political relationship with the indigenous nations.

The nations continue to demand that the colonizing nation acknowledge that U.S. policies and laws must change to accept a more humane nation-to-nation political relationship.

The federal government has made occasional strides by honoring some treaties, allowing some self-government and providing some assistance to the nations, but the U.S. Supreme Court continues to declare that the relationship with indigenous nations remain premised on its absolute proprietary power, regardless of the promises made in treaties and the protestations of the original landowners.

With the racist premise of the Christian Discovery doctrine, when coupled with the 1903 declaration in Lone Wolf v. Hitchcock that Congress has the power to unilaterally break Indian treaties, the colonizing nation presumes it has legitimate authority to continue its domination of indigenous nations.

Here are only a few examples. In 1941, the U.S. Supreme Court upheld the dispossession of Hualapai Nation lands for the benefit of the Santa Fe Railroad Company with this declaration: “The sovereign (United States) can extinguish title “by treaty, by the sword, by purchase, by the exercise of complete dominion adverse to the right of occupancy, or otherwise.”

Likewise, just last year (October, 2020) in McGirt v. Oklahoma, the Supreme Court made a decision sought by the Muscogee Nation that their reservation had never been disestablished by Congress and therefore Oklahoma criminal laws could not be applied against a native accused of a crime occurring on Muscogee lands.

What was otherwise viewed as a favorable Indian law decision was dampened by the court’s reminder that Congress still has the almighty plenary power: “This Court long ago held that the Legislature (Congress) wields significant authority when it comes to tribal relations, possessing even the authority to breach its own promises and treaties.”

Once again, the court served notice upon the original sovereigns that Congress could unilaterally take their lands and their sovereign right of self-government.

The continuing reliance by the judicial courts on the Christian Discovery Doctrine and the concomitant theory of congressional plenary power over the lives, lands and property of indigenous people and their nations means that the original sovereigns are never assured of protection by the federal courts that U.S. treaty promises, as dictated by the U.S. Constitution, will be honored as the supreme law of the land as declared by their own Constitution.

The latest pronouncement came in the very recent decision of the Arizona federal district in the Apache Stronghold case denying the plea of the Apaches to halt the mining of Chi’chil Bildagoteel (Oak Flat).

Even though the court acknowledged that “the land in this case will be all but destroyed to install a large underground mine, and Oak Flat will no longer be accessible as a place of worship” the court essentially held that its “hands are tied both by Congress and by the Constitution.”

In other words, the courts will not redress the denial of the Apaches’ right to continue their spiritual connection to their sacred land.

Against this backdrop of racist law utilized to subjugate the original sovereigns to mere occupants upon their own lands is the struggle of all indigenous people and their governments to survive as distinct separate nations with full human rights to be treated as equals with dual citizenship.

The continued legitimization of this racist doctrine by the American judicial system only strengthens the resolve to continue the struggle.

The blatant racist use of the plenary power by the federal courts was exemplified in 2003 in United States v. Navajo Nation where the secretary of Interior was found as a factual matter to have defrauded the Navajo Nation by secretly assisting Peabody in the negotiation of Peabody coal lease amendments, to the tune of $600 million.

Nonetheless, the U.S. Supreme Court — twice overruling decisions of the U.S. Court of Appeals for the federal circuit — denied payment of the judgment by declaring that the trust relationship between the U.S. government and the Navajo Nation does not include liability to compensate for the Interior Secretary’s breach of basic trust duties of care, candor, and loyalty.

The court held that because Congress did not enact a specific law and there was no regulation requiring the United States to compensate indigenous nations for such fraud, the Navajo Nation had no compensatory remedy for having been cheated by its federal trustee.

The current return of talk and pronouncements of “respect” for tribal sovereignty and promises of “consultations” with indigenous nations, after a horrible reign of terror by the last federal administration, is, quite frankly, not enough so long as the American courts continue to view the Christian Discovery doctrine as the foundation of federal Indian law.

Why not challenge the federal government to redefine trust responsibility per our own understanding of the political relationship?

The Diyin Dine’é blessed the people with this land to protect and preserve for all time. Declaring that the federal government holds title to Diné Bikéyah in trust for the beneficiary (the Diné) must not necessarily mean that the Diné are mere occupants.

The concepts of trust title and plenary power, as developed and implemented by the federal government, may seem intractable and some may fear what might happen if we raise our voices, but for the sake of the right of our children and grandchildren to continue as a sovereign nation within Diné Bikéyah, it is our duty and responsibility to demand our inherent right to remain upon our lands and demand that the use of our lands must be in accordance with our traditional values and laws.