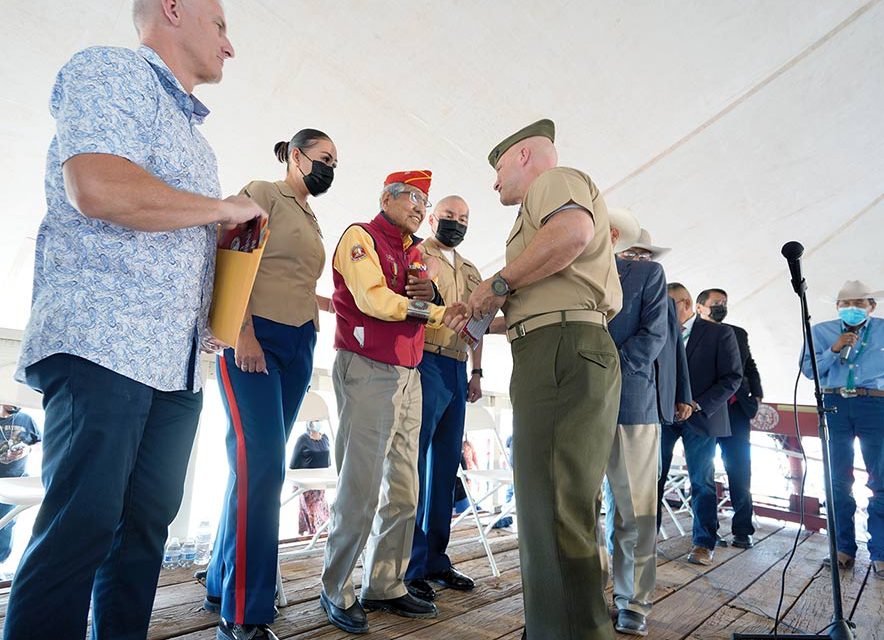 A historical event at Tse Bonito, New Mexico, near the Navajo Nation capital occurred on Sunday, Aug, 14 –the groundbreaking ceremony for the future site of the Navajo Code Talkers Museum.

National Navajo Code Talkers Day is a holiday across the United States with many communities pausing to remember the young Navajo Marines who used their language to gain victory in the Pacific Theater during World War II. The Navajo language is still spoken fluently today.

The morning of Aug. 14 was a clear day with a beautiful sunrise as the parade goers set up along the road. Families traveled from great distances and visitors came from different states across America, including a variety of U.S. Marine Corps personnel from Arizona and California.

At sunrise, the day began with 200 runners who completed the honor run, covering two miles, coordinated by Tom Riggenbach and his team from Navajo YES.

The Navajo Code Talkers Museum board members began planning for Aug. 14 starting in June. With 12 weeks of planning, the day was a success to commemorate the day with golden shovels turning soil at this special location.

The board members were led by Navajo Code Talkers Peter MacDonald as president and the late Samuel Sandoval as vice-president.

A collaboration of volunteers joined the coordination of National Navajo Code Talkers Day at Tse Bonito. In Navajo, Tsé Biníí?tóhí, means water under the rock. The elevation is 6,824 feet and is surrounded with rich natural resources.

In the afternoon, Navajo families gathered at the Window Rock airport to see the U.S. Marine Corps MV-22 Osprey, which was flown in from California Naval Air Station. MacDonald presented Bellon with a horned toad pin, “cheii,” which means maternal grandfather, for protection and a successful journey.

“You will never be hurt,” MacDonald said. “You will be successful. Thank you. It’s all yours from the Navajo Code Talkers and the Navajo people. It’s yours!”

In a a video message, Gen. Jim Mattis, U.S. Marine Corps (retired) and former secretary of defense, said, “On this day, every year our entire nation has remembered the debt owed to the Navajo people for their Code Talker’s valor and devotion. So, we pay national respect owed to those lads who faithful stood every task in combat while keeping their honor pure and clean.

Regan Hawthorne, code talker museum board member, said, “While we remember the heroic efforts of our U.S. Marine ancestors for whom the day is set aside, we remember also the course we are established on – that of building a monument to them, preserving the language and culture, which is to be seen by the world.”

The board thanks all those who participated in person or through live-streaming, organizations who donated, all the volunteers, thank you for honoring and remembering the Navajo Code Talkers. We appreciate all the sponsors who made this event possible.