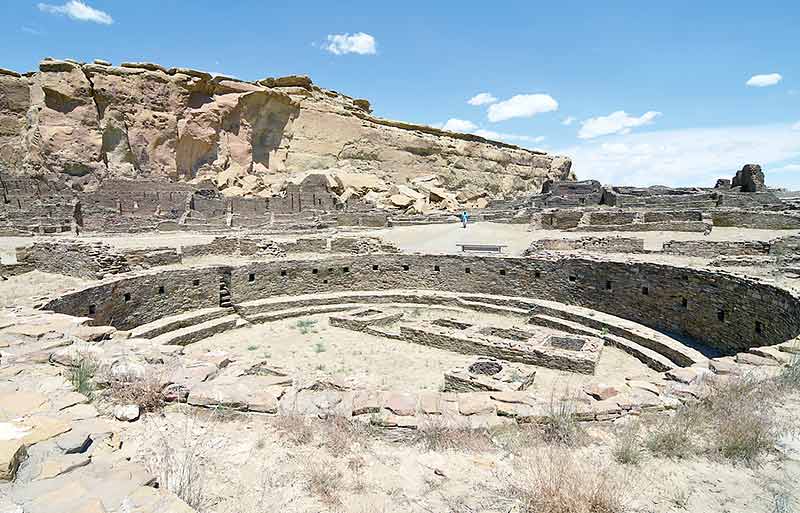 A tourist makes his way toward a kiva at the Pueblo Bonito ruins on Monday at Chaco Canyon Culture National Historical Park. Sen. Tom Udall, D-NM, toured the park and discussed protecting it while oil and gas drilling take place nearby. (Times photo – Donovan Quintero)

It is, indeed, a pleasure to be afforded this opportunity to comment on the legislation that will protect the land surrounding the Chaco Canyon area introduced by senators Tom Udall and Martin Heinrich of New Mexico. Representatives Ben Ray Lujan and Deb Haaland also gave their support.

First off, the legislation is long overdue and as I understand it is favorably in the best interest of the local landowners of the Navajo Nation and Pueblos northern New Mexico. Specifically, it’s intended to protect the sacred land from future development of minerals owned by the federal government within the designated area known as the buffer zone.

The Chaco Canyon area is a sacred place to the landowners, Pueblos and other tribes in the region. It is a common practice to the traditional Navajo people to gather multiple types of herbs for healing purpose and various ceremonies.

The way the Trump administration is violating the applicable rules and regulations to allow for the oil and gas companies is troubling and raises a paramount concern. This legislation will halt these types of practices once and for all. We know oil and gas business is Trump’s bread and butter.

The landowners from the Chaco Canyon area have suffered enough abuse and damage from the oil and gas companies causing major destruction of existing roads, disrespecting the landowners’ concerns about the annoying noise caused by the machineries for drilling and the mess they leave behind.

During a meeting at the Nageezi Chapter House in January of this year, there were mixed views expressed and one was why the landowners in impacted areas were not consulted as the legislation as it directly impacted them. Instead, the tribal leaders at the Window Rock level were consulted though they are not directly impacted.

Also, the landowners urged the urged the field staff of Senator Udall to recognize the chapter government leadership in the allotted land area as the local governing body. Purpose is to satisfy the tribal consultation requirements.

As a landowner in the land allotted region, I fully support the legislation in its entirety. I also support another concept as tribal consultation, which is to allow the landowners input in the early stages of development of important legislation.

In conclusion, I would like to say outsiders should be reminded not to trespass onto the Native lands without consent. They might be welcomed at first but their welcome will depend on how they treat us.

Thank you for this opportunity to comment on this important legislation as it pertains to the land surrounding the Chaco Canyon area.

My daughter was helping her grandmother at the Window Rock flea market when a woman described to be in her late 30s approached them and out of nowhere started to harass my daughter because my daughter refused to get her change for $20.

This woman not only impersonated a police officer but also verbally threatened physical harm to my daughter stating, “Man, if you were my daughter, I would slap you across the f—–g face!”

On top of that, this woman approached other vendors and pointed out my daughter, making the situation even more embarrassing.

This woman later returned to purchase the pants she wanted and demanded an apology from my daughter, but for what? My daughter did nothing wrong.

As her parents we received a distressed telephone call from our child saying she was worried that this woman had called the police to arrest her. Later, we found out the Window Rock Police Department never received a call from this woman who pretended to make the call in front of my daughter.

WRPD should have shown more concern that there is a person out there claiming to be a police officer, placing fear onto people, more so onto children.

We were the ones that took the initiative to call the police. However, the officer showed lack of compassion or concern — and they are supposed to work for the Navajo people. This call seemed to be more bothersome to the responding officer when it’s in their oath to honor, and never betray, to have integrity, character, or the public trust.

Tell me how that is supposed to happen when the Navajo Nation law enforcement officers show lack of consideration?

In the past 17 years, my experience with Navajo Nation police officers is their inability to have empathy and kindness. They approach you in a demeanor that is unwelcoming and very unpleasant.

I understand these officers encounter so much while on duty. However, in order to feel better at the end of a day is to feel like you’ve helped someone get through their bad day.

Based on personal experience, I can say that Navajo Nation police officers, compared to outside law enforcement, need major improvement, especially in the areas of communication and how to interact with the public. The cavalier attitude they put forth is no way to help the Navajo people.

Before being hired, I’m sure they are pleasant and present themselves in a respectful manner. That should not change when they receive their badges. Respect is a two-way street.

Mr. Tsosie did not mention the Indian Self-Determination Act of 1975 or, in 1908, the Winter’s Doctrine reaffirming water rights of Native Americans. But Tsosie made a good list to blame the U.S. federal government for our 45 years of failed Navajo Nation economic policies that only suppressed the economic opportunities for the Navajo people.

The Indian Self-Determination and Educational Assistance Act of 1975 was supposedly to rejuvenate Navajo government by rejecting and countering previous paternalistic policies. Navajo were now able to operate their own schools, teach their own language, beliefs and philosophies, but corrupt tribal leaders never let this happen and kept our Navajo people in poverty.

Winter’s Doctrine gave us Navajo Agricultural Products Industry that was supposed to be a billion-dollar economic machine and that also did not happen due to tribal corruption.

What is my point? Navajo Nation government is so corrupt and for some reason we can’t vote out all these corrupt politicians. As this new 24th Navajo Nation Council and executive office and justice department take charge, they are talking about the same old failed policies and only added a few different flavors.

We need to hold every Navajo politician accountable and call them out every time they write or give misinformation at chapter houses and on Navajo Times.

Attorney General Harrison Tsosie is wrong and it’s misinformation for him to say, “For hundred years, the Navajo people have been under the tutelage of the federal government.” We were under tutelage of Navajo sellout politicians and that is still true today.

Mr. Tsosie unwittingly admitted he defrauded the Navajo people over a month ago at one of the public hearings to purchase Navajo Generating Station. He said this at that public hearing, “We went through this process back in 2012, 2013. As attorney general of the Navajo Nation, I led the charge on buying Navajo Mine from BHP.” He also admitted he did the financial diligence studies to buy Navajo mine, and after Ben Shelly lost the election Mr. Tsosie skip-hopped to Navajo Transitional Energy Company and got a job as NTEC attorney.

No different from another former attorney general, Louis Denetsosie, who is now CEO of Navajo Oil and Gas, when he has no experience to run an oil company but is an expert in applying for million-dollar loans to stay above water.

If you do a due diligence study, there is no way this will direct you to buy a business that is going out of business. Coal mining business is no longer economically feasible and coal-fired power plants can no longer compete with renewable energy that is now selling electricity cheaper.

The Navajo Nation Council, executive office and DOJ led by AG Harrison Tsosie and Lorenzo Bates defrauded the Navajo people by using the Navajo people’s money to buy a junk business — $85 million for Navajo Mine, $3 million for due diligence studies and $4.1 million to start NTEC and they have not made any profits.

The corrupt Navajo politicians pulled this scam by waiving the Navajo Nation sovereign immunity and other laws.

We can no longer just take their words for anything.

My name is Mandy and I am from Mongolia. My 80-year-old grandfather is visiting Oklahoma City until May 1st.

He is really keen on meeting people from the Navajo Tribe. Unfortunately, we could not find any in Oklahoma City.

Please, if you have any information about Navajo people living or even visiting here we would greatly appreciate it. It would mean the world for my grandfather to meet his Navajo brethren.