At a time when Navajo people need a strong president to unite the executive and legislative branches, our president, vice president, and speaker don’t seem to care.

Their lack of leadership in this area is not just driving them apart, but hurting opportunities for real growth and development.

We pray daily that someone will fill the leadership void and prevent the administration and the Council from worsening the current unrest, trampling Navajo Nation government, and irreparably harming the relationship that needs to be in place between the executive and legislative branches.

During this pandemic crisis with chapters, communities and everything just about in turmoil, we need leaders to uphold Diné core principles and rely on them for guidance.

Clearly, that leadership isn’t coming from this administration or the Council, so we must look to other branches of government and the Navajo voters for leadership.

This administration and the Council’s disregard of working together and failing to effectively respond, cost lives and sets the nation on edge.

While this is not enough, President Nez and vice president both stoked dislike and division, setting back what progress there’s been on bridging Navajo traditional beliefs and Christian denominational teaching, undermining progress for advancing both in a way that is helpful without depriving or appearing to favor one over the other.

Instead of working to unify, heal and strengthen, President Nez and Vice President Lizer sowed division, and to this day, they are not responsive to traditional ways of thinking or doing anything to advance it for the betterment of the Navajo Nation.

It is only a matter of time before this creates other more serious divisions among Navajo people, especially the Council and the chapters.

It is a fact when the Congress and the Biden administration approved the CARES Act and APRA funds, President Nez (or the Council) didn’t have to do much. Yet, they pretend it was due to their leadership that the funds were allocated.

That is nonsense! All of that is due to President Biden and his administration working with various members of Congress.

More recently, we are told about $160 million of the $186 million APRS funds will go to President Nez’s office. This is more about politics and the power to apportion the funds to use to position himself politically through allocating these rare funds.

It makes better sense for the Council and the respective committees to allocate the funds to the various branches and divisions, rather than allowing the president to use it to advance his political wishes.

Is there ever a more vivid illustration of why Navajo people must continue demanding for accountability?

The Navajo people’s right to call for checks and balances on the executive and legislative branches are all that remain to make our government more responsive. No president or Council gets to brush them aside.

I suppose we are waiting for the next round of funds to come through from President Biden and the Congress so areas such as government inefficiency, lack of new revenues, lack of high-quality jobs, education instability, environmental issues, lack of a quality health care, water rights, land issues, and other pressing Navajo issues will all be addressed.

That is as far as President Nez and Vice President Lizer are concerned — that seems the way they expect things to occur, and the Council sitting along the side with their own lack of leadership and foresight.

This is one major reason why in this next election we look for a candidate from the outside rather than expect someone from within the Council to appear. We already know what they are incapable of.

This administration and the Council’s failed leadership through continual crises and their disregard for the Diné Nation’s core values and its laws demand we Navajo people need to step up and demand major changes we desperately need.

I think of the hundreds of millions of earthlings who suffered unspeakable deaths from ravages of smallpox, bubonic plague, yellow fever, polio, AIDS, and dozens of other viral killers. What would they have given for easy access to an effective prevention method?

And yet many of the most spoiled people who have ever lived on planet earth won’t touch the shot, hating the thought of losing some two seconds of their precious freedom.

One lady in Arizona offered to take up arms against anyone who would force her to be vaccinated.

I would venture she has never publicly avowed to do the same for her freedom of speech, press, religion, or her right to live and work where she wants. Freedom from the needle is greater than all of them for her.

Life expectancy in the first decade of the 2000s astonishingly declined for three straight years due to the petulant desire of Americans to treat their bodies however they want.

But in 2020, we saw an aggregate yearly decline of anywhere from 14 to 39 times those earlier yearly drops, depending upon ethnicity, according to Virginia Commonwealth University.

Those two seconds of militantly asserted freedom by anti-civic Americans is costing their neighbors dearly.

Thank you for new ramp story 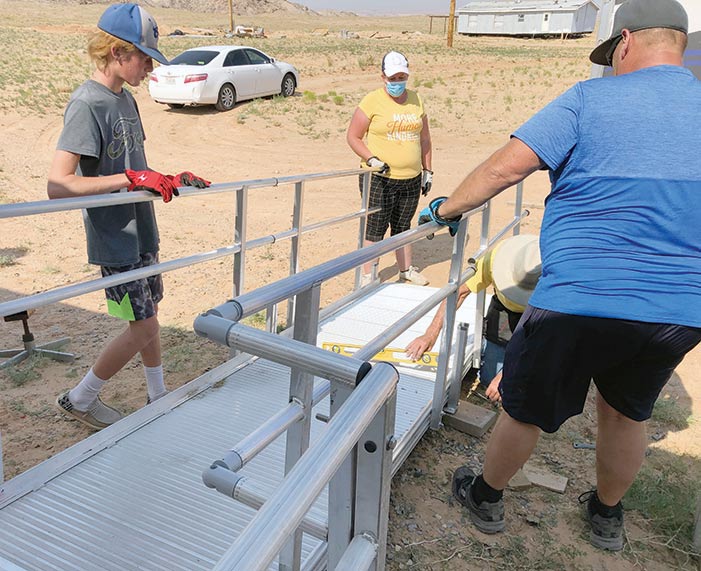 I wanted to write to thank you for the article printed about Active Re-Entry in the Navajo Times (“New ramp built to help elder’s mobility”, Aug. 19, 2021). We are so grateful for your ability to share the information with your community members.

I also wanted to take a moment to clarify that the individuals we are able to serve must have a qualifying disability, must qualify based upon their income (only if it is a paid service being provided, such as the ramp discussed in the article) and the individual must also reside on the Utah side of the Navajo Nation.

The paid services are the only program that requires the eligibility based on income, however, residing on the Utah side is paramount as the funding that is obtained to provide the assistance, is funding provided from or through the state of Utah.

We feel very fortunate to have met Ryan Benally, as he has been an asset in helping us to get the word out about the services, which can be provided by Active Re-Entry to the community members in your area. We are also very grateful to have Jessilee Kelly employed with us.

If I can be of any assistance or if you have any questions about our programs, please feel free to contact me. Thank you again.