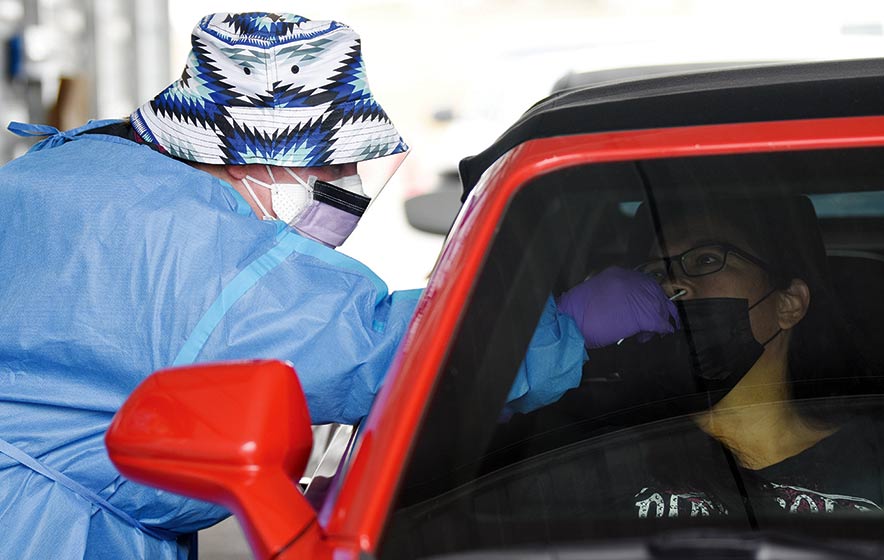 About 40,000 people could be getting a COVID-19 vaccine booster shot in a month or so.

Right now, only at-risk patients, such as cancer patients, people on chemotherapy, people who’ve had an organ transplant, or people taking medication that suppresses your immune system, are eligible for a third dose.

Dr. Chris Percy, director of community health at the Northern Navajo Medical Center, said there are about 40,000 people, including children ages 12 and up, who are fully inoculated with one of three vaccines that are available.

One of which, the Pfizer-BioNTech vaccine, is approved by the Food and Drug Administration for use on people 16 years and older, and for emergency use for adolescents 12-to-15 years old.

And if the Centers for Disease Control and Prevention approves a booster shot for everyone, Percy said the hospital will most likely start giving shots from October through December.

“So that’s going to be a lot,” Percy said last Thursday. “We’ll probably be back to mass (vaccination) events like at the high school. We’ll probably have a bunch of community events to reach those thousands of people that need their boosters.”

The Navajo Department of Health reported 32,600 people testing positive for COVID-19 on Aug. 31.

Percy said the hospital has been responding to a lot of questions relating to the booster shot.

“But right now today, if you didn’t get a call from the hospital to come in and get a booster, you’re probably not on that list,” he said.

“If you think you ought to be, you know, and you want to ask your doctor, call in and find out and then if they tell you to come in, then great, we can do it right now,” he said. “But otherwise, the rest of us we’re just waiting till that eight months from our second shot.”

Percy said if a recommendation is given for the rest of the general population to get a booster shot, it will be based on when the second dosage was given.

“For example, if you had your second shot on Feb. 15, then add eight months to the February so it makes from two to ten. So by Oct. 15, you’d be due for a third shot,” he said.

To calculate when someone might need a third dose, Percy said they should look at the second date of their vaccine shot on their COVID-19 vaccination record card.

Percy said he’s been explaining how long the vaccine’s effectiveness can last for people with immunocompromised systems.

Percy said out of the 32,000 patients that have been fully vaccinated by the hospital, 112 so-called “breakthrough” cases have tested positive for COVID-19. According to NDOH, the Shiprock Service Unit had a total of 5,520 positive cases as of Aug. 31.

Since the COVID-19 Delta variant was first reported on the Nation, the number of cases in the month of August was 1,147, which has not been that high since February when it was 1,277.

“It causes very serious illness in unvaccinated people,” he said. “And it seems like that Delta variant is kind of bouncing around (in) our communities trying to find the unvaccinated people. So and when it finds them, they get sick.”

Percy added people who have been coming to the hospital’s vaccination events have been telling him they were ready to get their vaccinations because their family’s “gentle” coaxing.

“I think people are listening more to their family than they’re listening to health experts,” he said. “And that’s fine. That’s how most things are in life,” he said.

To find out if you need a third COVID-19 vaccine dose, call your local health provider.