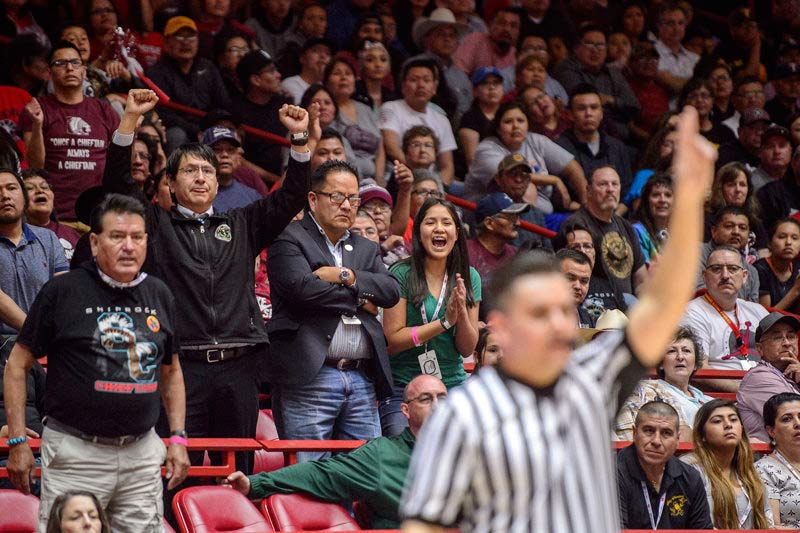 Over the weekend on Saturday, Sept. 21, Mrs. Charley and I attended the Kayenta Boarding School Invitational Cross-Country Meet. We were invited by our daughter, Eugenia Charley, a teacher and one of the coaches with JV and varsity girls. She even paid our admission. Her fellow coaches are Birdie Holiday, girls’ varsity, and Chelsea Holiday, JV girls. We arrived at the meet shortly after 9 a.m. We brought our folding chairs and found a spot to sit and enjoyed the new school’s first cross-country sports activity.

The athletes, coaches, drivers, parents, grandparents, and visitors were arriving. The air was filled with excitement. Soon the honorable Navajo Nation President Jonathan Nez and his little son holding his hand arrived. We were pleasantly surprised to see the president in attendance. He greeted us and other people, shaking hands. The sponsors of KBS were busy getting ready to start. The music was on loud and festive. Athletes were warming up and some checking out the course with anticipation. A lot of people were coming in and seated along the start of the race area.

The KBS with Ms. Joan Benally (a teacher), staff, coaches, and other helpers certainly did an outstanding job of planning and preparing for the meet. We were thoroughly impressed. Eugenia told us earlier she did not get home until about 11:30 p.m. the night before getting everything set up. The team effort of presenting their first cross-country meet was amazing under the leadership of Ms. Benally. They even had a large tent set up.

The local EMTs from the Kayenta Health Center were also present. Eugenia told us the local Kayenta Unified School District high school athletic department cross-country coach helped their school prepare such as athlete lists, marking the course, etc. In my opinion, this was commendable on their part for helping. All the KBS sponsors wore their vests with “KBS Event” on the back. President Nez walked around the activity area greeting all the athletes and taking group photos with them. He shook hands with parents, grandparents and visitors. The sound system was loud and speakers could be heard clearly.

It was time to start; the emcee called for everyone’s attention. Ms. Benally presented the opening, invocation was given by the Oljato Chapter Vice President Albert Holiday, KBS acting principal Ms. Felicia Parrish welcomed and thanked everyone for coming to their first cross-country meet, including the athletes, coaches, parents, grandparents, staff, and visitors. She thanked everyone for helping. A large crowd of about 300 was now present. Mr. James Brown, a former KBS official, spoke and enlightened the visitors on the history of cross-country from the old school site, which was no longer there.

President Nez also addressed the audience, expressing his appreciation for the invitation, being present at KBS today, praising the athletes, expressing fitness, and being healthy for youth and all. He also expressed his appreciation to the coaches, parents, grandparents, and all those who worked with youth programs. Soon Ms. Benally told all the JV girls’ runners report to the starting area. Everyone stood up as President Nez started the race with a countdown: 3, 2, 1, bang!

Off the runners went. Everyone cheered for their respective runners and we waited for the runners to start coming in. President Nez continued to walk around greeting people and helping here and there. I had never seen a Navajo Nation chairman or president get so involved with a school activity and enjoy it. He put himself in a posture of belonging in the community and was dressed casually. If you did not know him, you could easily assume he was one of the staff or a helper.

We were so appreciative of his presence and help. It was so exciting to see the runners coming in and each announced such as what school they presented such as Blanding is coming in, Shonto Prep, Kaibeto, Naa’ Tsis Aan (Navajo Mountain), or Kayenta Boarding School. It was awesome and fun. There were loud cheers for all of them until the last one came in. This was repeated for the boys’ JV, girls’ and boys’ varsity.

They were all exciting races, some were so close, people hollered and screamed. President Nez started all the races. It was great to see the president so involved and enjoying every race. He even assisted giving out the awards. The awards included inscribed pottery and medallions. It was announced all the awards were donated.

The elementary schools that participated were Blanding, Naatsis’aan (Navajo Mountain), Kaibeto, and Kayenta Boarding School, the host. My observation was the athletes enjoyed themselves and had a good time. The event was well organized by Ms. Benally and all the staff and helpers. I commend the president for being there through the whole school activity and your kind help. KUSD cross-country athletic director, thanks for the assistance help, and to all the sponsors, and all of us that paid admission for the KBS cross-country fundraiser for the future events and awards.

I am also a former employee as a principal, teacher-supervisor and teacher at the old KBS.

This is continuation of Navajo Nation Department of Agriculture program corruption. Leo Watchman Jr., NNDA director, refused rebuttal to media report of his program incompetence. Now that his fair supervision is over he will find time to call me a liar in the media. Here’s another truth.

NNDA do not have such professionals. Therefore, Watchman’s legal opinion is invalid. He is using the 40 percent figure reported as overgrazing in 2015 final report of agency-wide range study done under BIA outside Bilagaana contractor for the whole 3.1-million-acre Fort Defiance Agency range vegetation study. Watchman is wrong using this information for one permittee who has a small 2,500-acre rangeland in high elevation green pastures. Watchman claims consolidation of permits could lead to greater deterioration of rangeland. His legal opinion is wrong.

They failed to provide assistance at the 1984 DGC meeting. That is the time and place to pose these arguments, not years later. In fact, the 1984 DGC resolution was never rescinded. Watchman claims combining permits would set precedents. His legal opinion is wrong. BIA and NNDA already set precedent in 1986 when they approved combining two grazing permits as one seasonal permit. Today, the subject permittee with two permits is the only one holding seasonal grazing permit with one yearlong permit and wanted them to combine but Watchman declined. Watchman must justify how only one permittee holding two permits rez-wide can set precedent when BIA and NNDA allowed combining two permits in 1986. Summary — Why is Watchman permitted to continue his unjustified administrative action?

Watchman does not support his mission statement that promotes good relation with clients. He failed to submit clarification and justification of his erroneous legal opinions. His interpretation of rotational grazing practice contradicts 2015 Navajo Nation Division of Natural Resources webpage that promotes good range management by rotating the herd to prevent overgrazing. This is exactly what the subject one-man permittee is doing today with his seasonal grazing permit. He has every right to ask for clarification and justification but Watchman refused.