A deal ‘that cannot and should not be supported’: Delegates, Nez question NTEC purchase of coal mines 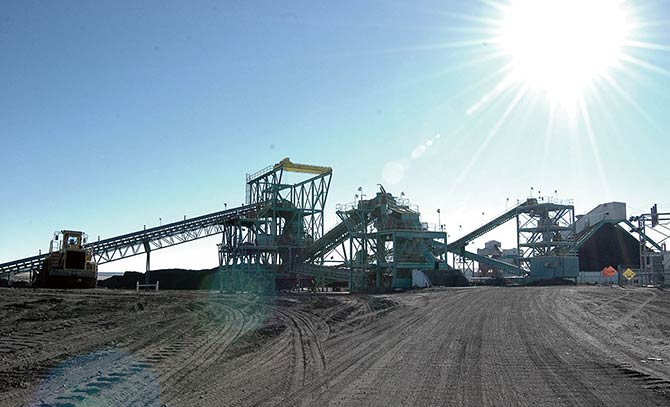 The Peabody Coal Mine on Black Mesa, Ariz., has been the focus of a major lawsuit filed by the Navajo Nation against the company and its partners. (Times file photo.)

As an NTEC shareholder, Charles-Newton said she was never told about the company’s recent purchase of three coal mines in Wyoming.

She’s not the only one who was not privy to the purchase. The Navajo Nation Council and Navajo Nation Department of Justice also were not informed.

As for President Jonathan Nez and Speaker Seth Damon, they received notification through a letter and memo on Aug. 19 — the day NTEC sent out a press release to the public about the acquisition.

“This is a deal that cannot and should not be supported by the Council,” said Newton. “We have a board and CEO who has not abided by the rules, regulations that are in place put by this Council, put by this Nation.

“If NTEC wants to purchase this mine then we need to look at the CEO and his managers’ salaries, cut that in half and have them invest in that coal company using their own money,” she said. “This is the people’s money and the people were not notified and as a shareholder of NTEC I was never notified.”

In August, just days before the Kayenta Mine was scheduled to shut down, NTEC revealed it had purchased three coal mines from the bankrupt Cloud Peak Energy for $75.7 million.

“With this purchase, NTEC becomes the third-largest coal producer in the United States,” stated Clark Moseley, NTEC CEO, at the time. “This growth will allow NTEC to support the Navajo Nation and its members as well as other local economies throughout the West.”

During last Thursday’s Naa’bik’iyati meeting the committee heard from Navajo DOJ attorney April Quinn on what this acquisition means and if it’s permissible.

Quinn said they have not spoken with NTEC about the acquisition but the contracts show that the enterprise waived its sovereign immunity when it acquired the mines, meaning the company could be sued by the seller if something goes wrong with the purchase.

She said all enterprises must inform the Navajo Nation when they waive sovereign immunity and NTEC never gave notice.

“In the enabling legislation it requires 10-day notice of the proposed transaction or agreement that would waive their sovereign immunity,” said Quinn. “We give them to the speaker and the president. DOJ has reviewed the purchase agreement for Cloud Peak. There is a waiver of sovereign immunity in that agreement, and I don’t believe that notice was given to the Nation.”

Delegate Raymond Smith asked if the Navajo Nation could be dragged into a lawsuit against NTEC.

“Any waiver of their sovereign immunity, any waiver that allows them to be sued … they are allowed to be sued,” said Quinn. “That does not affect the Navajo Nation. We won’t be dragged into courts.”

Quinn said she wasn’t allowed into a recent NTEC meeting. She said she was told no attorneys were allowed, but NTEC’s attorney was present.

“That’s a question for NTEC,” said Quinn. “Navajo Nation attorney should’ve been in the room. There were security guards at the door and I wasn’t allowed. This was the first time I’ve been restrained from being in the room with a client.”

Delegate Daniel Tso said he wants to see Mosley and other figureheads of NTEC in the Council Chamber. He referenced a meeting when NTEC was looking to buy NGS, but rather than meeting in Window Rock, the delegates had to travel to Phoenix.

“They are a Navajo company and they don’t want to walk in here,” said Tso. “That is the respect they need to show. We haven’t been introduced to the board of directors. All we see is their profile on the website.”

Nez, who has supported the closure of NGS and pushed for renewable and sustainable energy, said he did not receive prior notice or information of NTEC’s interest or pursuits in acquiring these three coal mines, but this is in part how NTEC was created years ago.

“The provisions under which they were created afford NTEC a certain level of autonomy and we also understand that non-disclosure agreements are often required in business transactions,” said Nez in an Aug. 29 statement to the Times.

“But there is also the responsibilities of the NTEC member representatives to communicate with Navajo Nation leadership and the public,” he said. “Our administration, through the Háyoołkááł proclamation, is prioritizing renewable energy projects for the Nation and we certainly encourage NTEC to partner with us in pursuing more renewable energy development opportunities for our communities.”

“They haven’t answered that question,” said Charles-Newton. “We need to make sure to hold them to that legislation. How do we tell our people that we are going to allow for them to purchase mines that are going into bankruptcy?”