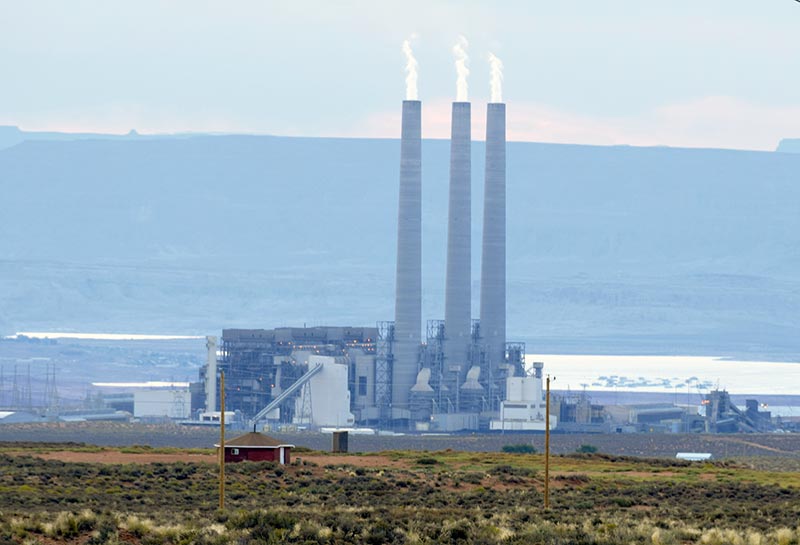 Navajo Times | File The impending closure, two decades ahead of schedule, of the Navajo Generating Station was the story of the year for the Navajo Times.

The 800 workers that are confronted with the NGS power plant and the Peabody Coal mine shutdown face a life-changing dilemma, an uncertain future with the possibility of no regular paycheck to take care of the family. And that paycheck has been substantial, a testament to the hard work, training and skills of the workers.

They have every reason to be concerned and their preference to have the plant and mine continue operating past 2019 is understandable. In all these families there are bright-eyed innocent little ones, whose parents and grandparents have the greatest hopes for them.

Regardless of what our positions are on keeping the plant and mine open, the hope we have for our children is our common ground. We ponder the future times of our grandchildren through our traditional stories, research, science and current trends happening around the world. The future picture does not look good. Climate change is a reality and we know that coal burning and mining contribute to this reality.

Our greater dilemma is to consider whether we should be comfortable now or make some sacrifices and prepare our collective situation to assure that our grandchildren and coming generations have a decent opportunity for a comfortable survival. Looking at the probabilities of the future picture, it WILL be a matter of survival. We must consider what our grandchildren in the future will say about us when they discuss what we did to them or what we did on their behalf.

These are serious questions that we should pray and talk about together and come up with the best solutions together, as this impacts all of our lives today and our grandchildren in tomorrow times.

Thank you for updates on the various happenings within our rez. I am making random comments on the news sub-headlined on Jan. 18, 2018 as follows:

1. “Delegates debate increasing Council to 44.” It might help the Council to have impact studies made with telecommunications factored in first rather than indulging in number games as done previously.

2. “Tour finds toxic gas leaks in Red Valley.” Thanks to Diné CARE. We need Diné CARE and the like in the whole of our rez.

3. “Tribe purchases another Colorado ranch.” The Big Boquillas was purchased without a plan of operation, too. Maybe this time, the specific plan is to have one of our elected officials ride off into the red sunset (horizon).

4. “An overview: What is happening to our money?” Ditto! Ditto! Mr. Murphy.

5. “Council finally prepares to discuss a constitution.” Council should first originate its or our own government before it contemplates a constitution based on the current oligarchy designed by Uncle Sam for control purposes.

6. “New Year’s resolution: Repeal the Diné Marriage Act” by Kyle Ranieri — The traditional Diné law should be allowed to remain intact “un-codified” as it is or was created spiritually by our Holy People, not legislators. Nor are they amendable by five-fingered legislators. What remains un-codified will most likely reflect the Bilaagaana ways and a tinge of our dear Trump’s prejudices. 7. “Praying for Shash Jaa.” As indigenous people, praying is our last powerful resort so long as the Native American reverence and philosophical attitude toward nature (especially our sacred ones) appear incompatible with the Manifest Destiny motivated drives. Our in-depth understanding and language of reverence toward nature cannot be understood by a culture whose main mission is to develop (rip off) nature. Thank you for helping me share my rez comments.

It is difficult to believe how we take for granted our way of life, not realizing the debt of sacrifice, the loss of brothers, sisters and family members for our freedom that we enjoy and take for granted today.

Veterans placed themselves in harm’s way where, in service to our country, the U.S. Department of Veterans Affairs has this one slogan, “You answered our country’s call; we’ll answer yours” (va.gov/homeless).

The national Veterans Affairs, despite challenges, makes clear that, “No Veteran Should Be Without a Place to Call Home — VA is committed to ending homelessness among veterans.” Veterans are different. As such, they are treated differently in the U.S. for their service to our country.

They have separate medical facilities, employment, education, re-adjustment assistance, housing and other support services. As important as these services are for veterans and for our Native veterans, there were and are still many barriers that limit access to these benefits for our Native veterans. In the interest of providing a more responsive service to our Navajo veterans, the Navajo Nation Council rightfully established much needed funding for assistance to those who served our nation. The funds set aside were intended to assist Navajo veterans and not so much to serve as a political polarization platform.

A platform of cooperation and teamwork would best serve the needs of those who sacrificed greatly for our nation. In our monthly Chapter Veteran’s Organization meetings, housing is always an issue, a frustrating issue. Some of us took the time to look into this when we were told that Navajo Housing Authority had been given the management responsibilities to develop a veterans’ housing program. The Navajo Nation Council and the executive branch along with NHA, despite huge obstacles, should be commended for this foresight regarding housing for veterans.

Unfortunately, however, it appears as we are told, “Window Rock,” without a sense of principle or conscience, has stymied the lawful legislation enacted by the Navajo Nation Council for veteran funds. The dire needs of veterans once again are put on the backburner such as having to wait up to six years – yes, a timeframe of six years – as we are informed for a basic fundamental need, a place to call home. Off reservation, according to Veterans United Network, the timeframe for a veteran to acquire a home and move in is around 40 to 50 days, a two-month timeframe at the most. If this six-year wait time for our Navajo Nation veterans isn’t discouraging enough, veterans are now also told that as of this month (January 2018) the budget for veteran’s homes for the current fiscal year has been placed on hold until the next fiscal year which begins on Oct. 1, 2018.

An amendment is needed for a sensible revenue-expenditure budget now to take into account the trust funds appropriations annually, the annual cost-of-living adjustment, the increasing number of returning veterans, and other important critical factors that go into budget projections, as well as a reasonable timeline similar to off-reservation timeframes.

In our CVO meetings, it appears unlikely that veterans will let these issues continue as they are now. Veterans are saying this treatment is unacceptable, unacceptable to those who placed themselves in harm’s way, to those who paid a high price and have sacrificed greatly for our national interest. As more and more veterans return home, let’s keep in mind for our veterans and their families the national VA motto, “You answered our country’s call – we’ll answer yours.”

Navajo jail made me sick

Freaking jail water got me sick. Even under protective custody in Navajo Department of Corrections, placed under suicide watch I was treated like s***, like a criminal.

Sometimes they would yell, “Stop pushing the call button or I’m going to f****** come through there and f****** strangle you!” Is that the way a correctional officer acts? Because that is very unprofessional. Sometimes I had to use my own hand to wipe my own feces, mixing it with toilet bowl water just to clean my own s*** because I would try begging for tissue and soap. I am fairly a reasonable and intelligent man and was treated better in Flagstaff and at Yavapai County Jail.

Anyways that is how I think I got sick. Not all correctional officers acted this way though. Some actually had a heart after you got to know them but this was rare.

To be treated by your own people like chattel, I understand why someone would want to hang themselves in there. Trust me, I thought about it. I think these Navajo correctional officers either need some empathy training or need to spend a night on the other side of the glass just to understand how it is for us mentally affected individuals. Either that or they need to hire their own psychiatrist and nurse.

I was told, “This isn’t the Holiday Inn!” but to be treated better in a white jail than your own Navajo jail really says something about our civilization as Navajos. I am going to see a doctor today about my throat. I am coming down with some kind of un-sanitized sickness. Wish I could sue them but I don’t have that kind of money. I’m just another poor Navajo that nobody would listen to.

Thank God for that one correctional officer, though, who I knew from high school who listened and gave me a Holy Bible and a shower.

Thank you, Navajo Times, for keeping us informed. The story “Delegates debate increasing Council to 44” (Jan. 18, 2018) is most helpful in “guesstimating” the possible fate of our Diné. Is the tribal Council trying to reclaim its old stomping grounds of unbridled corruption? Words of an old Chuck Berry song come to mind “C’est la vie, say the old folks, goes to show you never can tell.”

However, big government can take away all rights. Government that is involved in every area of its citizen’s lives is not good government. Good honest government operates by the consent of the citizens, so citizens always have control of their government, leaders and their own individual lives.

Elected leaders should know of the dangers of big government. If they don’t know such universal facts they should never occupy an elected office. “C’mon man!” as it’s said when witnessing sports blunders. The Diné Nation, without question, could easily be governed by 12 competent delegates.

The need to improve communication with constituents can be solved with new jobs at the chapter level. Creating jobs would maintain the integrity of government at the chapters with additional employees. Chapters would have better control of their governments’ communication and their governments’ action or inaction. Good government never attempts to operate outside the rule of law, such as spending its citizens’ money to lavishly reward itself, or to spend its citizens’ money on foolish un-researched projects. Nor should it ever give preferential treatment to any select individual or groups outside the rule of law.

Good government is for the people, by the people and of the people. Nothing more, nothing less. Increasing Council delegates to 44 will never fill that bill.