President Rita Cheng wants to “…make progress toward a goal of becoming the leading university serving Native Americans.” With Native American Month already in full swing with events on campus right now, there was an event held a month ago to correspond with parents’ weekend called “Stew Fest,” a yearly event at NAU.

Many incidents occurred at that event, which was sponsored by NAU and the Native American Cultural Center, that are not known, even to the population of the university.

“Indian princess,” “Pocahontas,” and war woops were phrases (stereotypical) that were said in front of, as well as directly to, many of the Native students at the event. These comments were made by parents that had come to visit NAU for parents’ weekend. When these incidents occurred, they were brought to faculty members who were sponsoring this event by Native students who had volunteered. Many had dressed up in traditional clothing to represent their nations. 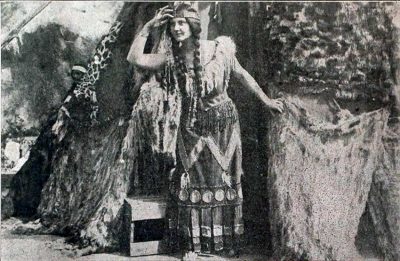 Anna Rosemond as Pocahontas in the 1910 film, Pocahontas, by the Thanhouser Company. (Courtesy of Wikipedia.org)

Miss Indigenous NAU was at the event, serving people who came to the fest. She had the pleasantries of having these terms directed at her. No action was taken by the faculty. The students pulled these parents aside and educated them.

The incident still has yet to be formally discussed by any faculty or staff members.

When I was made aware of this incident a week after the event, my first question was what was done at the time? Was the event sponsor notified? Who else knows about this? The answers to my question were nothing was really done. Yes, the sponsor was notified. They did nothing and the faculty responses were to effect of “meh.”

As I write this letter there still hasn’t been any type of formal discussion about the incident. With this information, I went on Twitter and made a cryptic tweet to get some dialogue going: “@NAU @NAU_SBPresident just heard there was an incident at last week’s stew fest with language that was used that goes against the university’s inclusion philosophy & nothing has been put out or am I mistaken? @NavajoTweets @NHOnews @navajotimes @jackcentral” on Oct. 10, 2018. A day later there was no response from any parties that were “@” in the tweet.

So, on Oct. 11, 2018, I followed up on my tweet with, “anything change? so parents calling native students ‘Pocahontas’ ‘Indian princess’ and doing war whoops isn’t anything to grant a response @NAU @NAU_SBPresident” — and still no response. On Oct. 16, 2018, I found Rita Cheng, NAU’s president, on Twitter and sent her this tweet: “@NAUPresident your thoughts? As of this letter, there has been no response by any parties mentioned above. Response from the faculty of NACC has been to push this incident away as if nothing happened. Questions are being brought up and the only response from the NACC faculty is, “We really don’t want to discuss this incident until we have everyone present.”

Who is everyone? Why is this the response from every faculty member at the NACC? Is Rita Cheng aware of this and trying to avoid an issue for NAU? What we know now is that all people involved are not (and failing) assisting Native students. “… It promotes a college-going culture among the Native American youth, offers support during students’ college years, and facilities service learning that benefits many tribal communities.”

This was found on the NACC’s homepage and is a quote from Joseph Martin, special advisor to the president, Native American Affairs. This letter shows that the language spoken to Native students and prospective Native students here at NAU is lacking. The actions being taken with this is speaking louder than what is being delivered to all Native students.

It’s sad that this issue had to come this far. Even a little positive response of acknowledging this issue and to try to get a solution to have this not happen again would have been a lot better.

I am writing in reference to a bill (No. 0341-18) proposed by sponsor Edmund Yazzie. Mr. Yazzie states the purpose of this amendment is as follows: The legislation amends the Navajo Nation Criminal Code, Title 17, sub-section 320, making it unlawful for a person to carry a concealed weapon in a public building or private place and recognizing a valid tribal, state, or federal license to carry a concealed weapon.

I would like to mention that a concealed firearms permit requires:

The current requirements to obtain a firearm and a concealed-firearms permit are on point in preventing unauthorized individuals from attaining a permit. Unfortunately, the Navajo Nation does not contribute crime data to the National Instant Criminal Background Check System.

This in turn is very disturbing for our Navajo people. Currently any Navajo convicted of crime(s) on the Navajo Nation (drug abuse/conviction(s), domestic violence, excessive DWI/DUI, tribal criminal conviction(s), etc.) that would otherwise prohibit him/her from legally possessing and/or purchasing a firearm(s) are not reported to the NICS.

Now, although I am in full support of Yazzie’s proposed bill, it is only the first of many much needed amendments to Title 17 of the Navajo Nation. Mirroring Arizona state gun laws and contributing Navajo Nation crime data to the NICS would be extremely beneficial to our people, but I know our Navajo Nation sovereignty laws play a huge issue in making this a reality. But I’m sure with some work and mutual compromise among Navajo Nation officials, it can be done.

Now, we all know crime on the Navajo Nation today has reached epidemic proportions. Not a day goes by that a crime is committed, a police officer(s) is called, an arrest made, eight hours of detainment, a court date set, and the individual is released to do it all over again.

That is, if you’re lucky enough that a police officer even shows up and apprehends the individual. It’s a system that many criminals know they can work in their favor to continue to break the law with little to no consequences for the crimes they commit. Many of these criminals have become so fearless of the law that they commit even more violent criminal acts, such as aggravated burglaries, aggravated car theft, assault, and even murder.

What are the rest of us law-abiding Navajos to do to protect ourselves and our families from these violent individuals? It is a fact that our Navajo Nation Police are stretched far and thin across our nation and it is impossible for them to protect us 24/7. It’s easy to say that our Navajo judicial system has failed us.

But the truth is that our criminal codes were written a long time ago when they suited us well at the time. We have outgrown these old criminal codes and they no longer serve and protect us in this day and age. This proposed legislation by Edmund Yazzie is the first step of many in our criminal codes that need to be amended.

I believe Yazzie, the Council, as well as the rest of our Navajo Nation government, know very well the current predicament our nation is facing right now. Please take this step in allowing the people of the Navajo Nation to protect themselves and their families and support legislation No. 0341-18.