Reporter’s Notebook: Corralling the press won’t stop us from doing our job 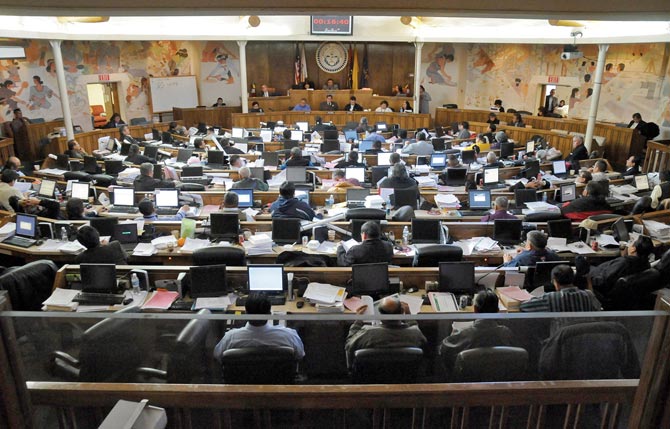 I felt like a rowdy horse being corralled back into the pen.

Gone were the days when I could freely walk among my Council delegates and sit close to the sacred Council Chamber floor with no barriers.

With the Council Chamber receiving its much needed, long-overdue renovation I was excited to see what the floor plans would be like. For the past six years, the Council Chamber has been my place of work as the government reporter. I’ve sat in the Chamber longer than I have in any newsroom.

But, coming back for the spring session, we local reporters saw that we were placed in a corner, off the floor but in the gallery. We would be crammed, sitting shoulder to shoulder, which was fine with me.

But, after a heated debate during the recent summer session, I had a rude awakening as to just how much reporters, no matter how familiar our faces have become and how many pleasantries we’ve shared with delegates, are in fact seen as just another nuisance.

“Get back in the media box,” or was it “Get back in the corner”; was it “get” or “stay”? I can’t really remember what the demands were when I came to the aid of my friend and former colleague and Gallup Independent reporter Marley Shebala.

Of course, Marley doesn’t need my help; she’s a journalistic institution and can hold her own. But when I saw her doing her job asking for financial reports from the Navajo Nation Gaming Enterprise and fended off by a very boisterous delegate, prompting the sergeant-at-arms to come toward us, I wasn’t having it.

I’m very quiet which is something a reporter should never be. Sometimes it takes much effort for me to ask questions, but my shyness has never kept me from doing my job.

I enjoy listening to whatever anyone has to say to me, rather than doing the talking or interrupting my interviewees, but all reporters aren’t the same. So when I speak up I like to think it’s for fair and just reasons.

After being barked at and told to stay in the media box, I pointed up and down of where I was standing to show I hadn’t left my post. Then I saw the sergeant-at-arms creeping up on us getting ready to throw Marley out because she was doing her job.

This infuriated me because, one, I’ve never been told to stay in a designated area by a delegate or by anyone before, and, two, I’ve always been respectful to all delegates. I expected the same respect.

In the time of Trump when the First Amendment doesn’t mean much and shutting out media is becoming the norm, I wasn’t going to let that happen on the Navajo Nation, not on my watch.

I’m more than likely making this way bigger than it needs to be, but if anyone knows the history of the Navajo Times being overtaken by the Navajo government, you know it’s not so outlandish.

Even if it was Marley, and not I, who was going to get the information dealing with the Navajo people’s money, they weren’t going to stop her from at least asking.

If they have the power to stop one reporter from asking questions, they will try to stop another and then another.

As the crowd started to close in on us, I stayed in the media box.

“You’re not allowed to applaud in the gallery!” I said to the smiling delegate who demanded I stay in my box.

It’s true, grassroots organizations and even protestors who have in the past shown their displeasure, or even their exuberance, with delegates have been shushed or delegates have asked the speaker to remove them.

So why was it OK for gaming enterprise officials to applaud after the approval of an amendment that took the attorney general and controller out of authority over loans between Navajo Nation and its enterprises?

It wasn’t OK. Council wasn’t voted in by the enterprise, but by the people, so all should be given equal treatment.

Of course after being called out on it, gaming officials blatantly denied it and the reporters were seen as the unhinged nuisance who have no right to question them or Council.

The next day of the Council session we sat in our media box, putting the day before behind us. The delegate who told me to stay in the box started to choke on his food. When he returned and spoke into the microphone he said he hoped he wasn’t “gázhįį” (witched) by viewers on Ustream.

Then he turned his attention to the reporters saying that basically what is written in the papers about him garners support, even if the papers “trash” him, implying the newspapers could also be the witchy culprit.

I know reporters are supposed to have thick skins, and for the most part I do. I get no love from either side of the spectrum, readers don’t like me for one reason or another, and delegates don’t appreciate me because I’m not a fluent Navajo speaker.

But, as a reporter, I try my best to provide the news, everything that delegates say, do and vote on during session. I may not get all of it but that doesn’t mean I won’t try.

As for being corralled, I can live with it, but not when delegates are oppressing the press from doing what the U.S. Constitution and Navajo Bill of Rights allows us: Getting the facts and reporting them.

When Council gives precedence to certain enterprises, or anyone they deem worthy, then they are not on the same level with voters who are punished for similar antics.

And when they make cultural jokes, which are in reality serious accusations, on the hallowed floor of the Navajo Nation Council Chamber, then it shows they really have no respect for Navajo traditions.

Writing this, I’m considering the many scenarios that will play out from delegates in response to this column and it is intimidating. But, for the most part delegates are very sweet, intelligent, genuine lawmakers who do love their people and try to do right by them.

Hopefully, even here on Navajo land, the First Amendment will prevail.