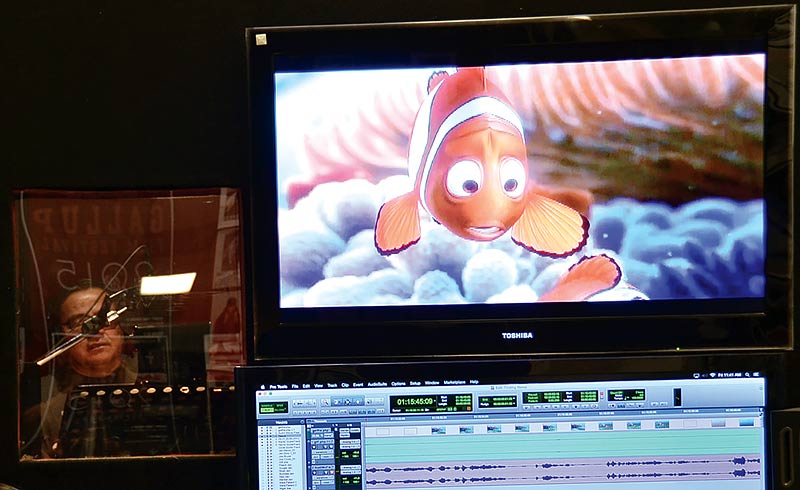 Disney's most famous fish, Nemo, from "Finding Nemo," is shown on a TV screen while an actor records a scene in Navajo. (Courtesy photo)

I was inspired to find Nemo myself after hearing about the recent showing of the “Finding Nemo” film being dubbed into Navajo.

Let me tell you, the journey to find him on my weeklong break from my exchange school in Australia was one of the most amazing experiences in my life.

It all started with a five-hour delay on my flight from Darwin, Australia to Cairns, which didn’t damper my energy and excitement for the trip at all.

I arrived in the beautiful little city of Cairns, known as the “Gateway to the Great Barrier Reef,” early in the morning. I wasted no time and quickly rushed to the local travel agency to schedule a trip to the reef.

I decided to choose the most affordable tour out of the bunch priced at $109 in Australian dollars, which is roughly equivalent to $82 American dollars.

Since thousands of tourists come to Cairns to visit the reef, I had to schedule a day in advance and wait. After a long 24 hours, I was up and early at 6 a.m. to catch the tour boat at 7:30 a.m.

I walked down to the harbor not really knowing what to expect. All I knew was that I was going to hop on a boat that would take me to the reef and I was going to get wet; I wasn’t even sure I would see Nemo. I just hoped that I wouldn’t see a shark.

The friendly boat crew welcomed me on to the boat, gave me some forms to fill out and quickly instructed me to take my shoes off since being bare foot would reduce slipping.

I quickly filled out the forms and laid claim to a cozy little table to sit down at. I waited patiently and observed all of the other passengers boarding the boat. The boat filled up quickly with about 50 people from all over the world such as New Zealanders, Germans, and Canadians. Of course, there were some Americans there as well.

Once the clock hit 8 a.m., the boat’s propellers roared to life and we were off to visit two places on the massive reef.

Our two destinations were Hastings Reef and Breaking Patches, both were three hours off shore. The Great Barrier Reef is huge and takes up thousands of square miles of the ocean coast near the Australian province of Queensland.

While our boat was in transit, Stewie, the crew leader briefed everyone on board about safety, the day’s agenda and seasickness.

He told everyone that seasickness is going to happen to some people and if anyone thinks they will get seasick, then they should buy some medication as soon as possible.

At first, no one opted to purchase the medication.  However, about thirty minutes into the rocky boat ride, there was a line of people with their vomit bags ready to buy the medicine.

Luckily, I was not one of those people. I was the guy having the time of his life at the front of the ship being soaked by the salty water of the Pacific Ocean with every wave crashing against the boat.

Three hours went by quickly and we arrived at the first location. We were briefed about how to snorkel and scuba dive.

At this point, we were given the choice to just snorkel or we could scuba dive for an extra cost. My original plan was to just snorkel but I asked myself, “When is the next time you are going to be at the Great Barrier Reef?” I decided to pay the extra money and swim right to Nemo’s home.

Stewie, the crew leader, also promised the few people including myself that were scuba diving that we would find Nemo. This assurance motivated me even more.

We were suited up with all of the diving equipment we needed; then in groups of three with an instructor, we descended into the beautiful blue luke-warm water. We underwent 10 minutes of diving training in the water to ensure that people participating in scuba diving were competent and comfortable.

All of us passed and with a simple hand gesture indicating, “OK!” and we began swimming downwards to the beautiful coral reef.

My only issue was getting used to breathing through the awkward mouthpiece and mask. With the mask, I could only breathe through my mouth and it was challenging to get a rhythm of deep breaths.

However, that issue disappeared completely when I first laid my eyes upon the coral reef. I was stunned by the natural beauty of the underwater ecosystem filled with all types of animals.

Fish swam around all around me. They darted in and out of the corals, which look like colourful rocks, but are actually living beings that provide shelter for other animals in the ocean.

Our groups were constantly informed to not touch the delicate coral reefs. As we swam further down to depths of 30 plus feet, I had to constantly squeeze my nose and blow to equalize the pressure of my eardrums. This was a skill we learned and it was an important one to prevent a ruptured eardrum.

For several moments, I felt like an astronaut exploring an alien planet. The weightlessness of the water, breathing through a mask, and the strange sea-life was something I would never forget. We navigated around the bottom of the ocean and marvelled at huge clams, sea cucumbers, and unusual fish.

Every now and then, I would look around to make sure a shark was not around. I was glad to not have seen one.

After about 10 minutes, Stewie excitedly got our attention to show us something important. With a quick kick of my flippers, I came right up next to Stewie to see him pointing at the most famous fish in the coral reef: Nemo.

I was happy to have found the tiny clownfish that I was searching for and sure enough, like the movie, Nemo was swimming around in the safety of an anemone, his home. An anemone is an animal that has dangerous tentacles that paralyze any intruders.

The orange, white, and black colors of his body stood out magnificently.  I was excited and could imagine seeing the ecstatic faces of my nephews and nieces, when I would tell them, “I found Nemo!”

He swam around gracefully and I reached out to pet him but he swam away. I wasn’t offended; I wouldn’t let anyone try to pet me, if I had just met them.

Our meeting was brief and after a couple of minutes of observing Nemo, our group had to return to the surface. I waved goodbye and began to swim upwards.

Our group had to ascend slowly out of the water to prevent decompression sickness, a condition that is a result of divers coming up too quickly and causing injury to the body from rapid pressure change.

Luckily, all of us came to the surface without trouble. We climbed onto the boat, took off our equipment and returned to our seats. As quickly as the trip began, it was over just as fast. I had just undergone an once-in-a-lifetime experience.

All I could do once I sat down was just sit there in amazement. I had never quite done anything as mesmerizing as scuba diving.

The day was a blur since I had so much fun. In no time, we were on our way back to the city of Cairns.

The memories of that day are still vivid in my mind and always will be. Since then, I have constantly been encouraging people to simply do it.

I’m not sure I will get the chance to go again but if I need to get close to the experience again, I know I can watch “Finding Nemo” in Navajo once I get home.

Editor’s note: Lane Franklin, a former intern at the Navajo Times, will be in Australia until June as part of an exchange program offered at Fort Lewis College, in partnership with Charles Darwin University.