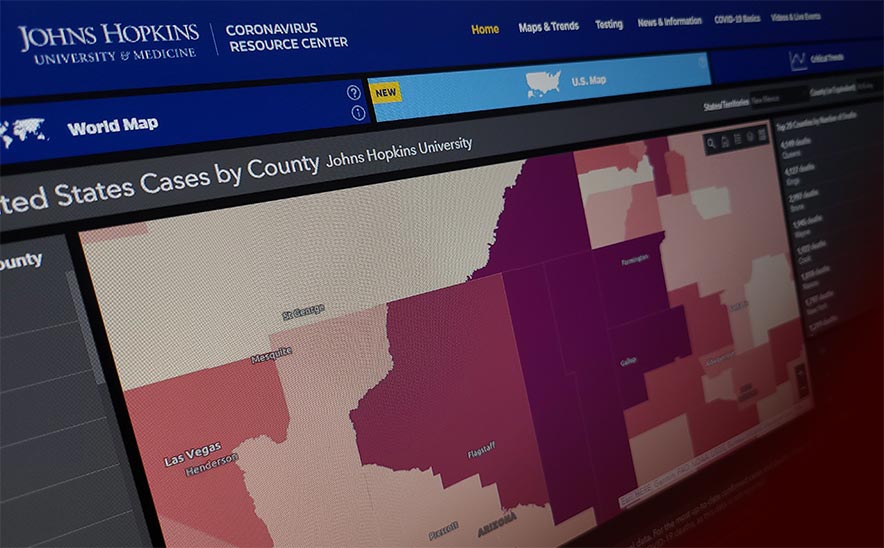 Johns Hopkins University & Medicine coronavirus research center map showing impact of of COVID spread on Navajo Nation as of May 6, 2020.

WINDOW ROCK – The number of people testing positive for the novel coronavirus passed the 5,000 mark yesterday, meaning nearly one out of every 30 Navajo Nation residents either has had the disease (often asymptomatically), has it now or has died from it. There are now 5,044 positive COVID-19 cases — more than a fifth of them in the Chinle IHS Service Area — and 167 deaths, as well as at least 1,745 recoveries.

Grouped by IHS service unit, Chinle continued as the hotspot with 1,269 cases; followed by Gallup with 854, Shiprock with 823, Kayenta with 780, Crownpoint with 508, Tuba City with 432, Fort Defiance with 247, Winslow with 100 and 31 residences are not specific enough to place them accurately in a service unit.

During the grim days of COVID-19, the topic of burials in family plots has been brought up for discussion.

If going through the proper protocols it is possible to establish a community cemetery, but it’s prohibited to have burial plots within home site lease areas.

“We put it in writing that you can’t put a burial site in the your homes site lease next to your residence,” said Mike Halona, head of the tribe’s Land Department, “especially if there are neighbors next door. These are some of the complaints that come in and people asking us to move bodies that are affecting their families and children.”

During a May 15 special Council session lawmakers addressed burial plots in an emergency legislation sponsored by Amber Kanazbah Crotty and co-sponsored by Seth Damon. The legislation was referred to the Resource and Development Committee.

The legislation stated due to the COVID-19 disease, there is a need to waive requirements in Navajo codes that pertain to burials, cemeteries, Navajo Nation Civil Trespass Act and Navajo Nation General Leasing Regulations.

Resource and Development Committee Chair Rickie Nez said he was concerned with this legislation because laws are already in place.

“If laws are being passed to waive land withdraws then where does place the grazing permittees?” asked Nez. “What do they need to offer in their consent?”

The issue of family burial sites within home site leases has been a complicated topic that has been discussed for years. In 1999, a resolution was passed for all chapters to establish community cemeteries because there were so many scattered burials they were hindering development.

“Traditional people say ‘No you don’t do that,’” said Halona. “Old traditional ways is put (the deceased) where nobody goes. Where people won’t come across it.”

Budget and Finance Committee member Nathaniel Brown said this is a sensitive topic, but in his chapters they oppose family plots.

“Right now if you go out on Navajo you have a lot of family plots,” said Brown. “I know this is temporary but what will happen in 20 or 50 years… where will our Navajo grandchildren live? Are they going to live next to multiple cemeteries?”