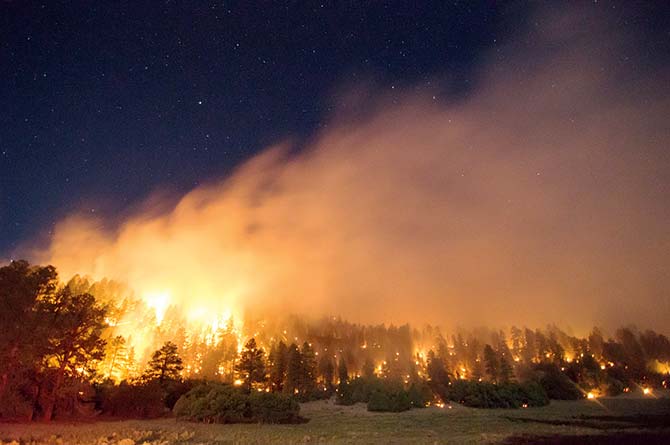 The Assayii Lake Fire lights up the night sky early Tuesday morning on the Chuska Mountains west of Naschitti, N.M. According to the Southwest Area Incident Management Team 3, over 13,200 acres has burned as of Wednesday morning, June 18, 2014. (Times photo - Donovan Quintero)

An investigation into allegations that employees of the Parks and Recreation Department started the recent Assayii Lake Fire was one of the factors that led to Navajo Nation President Ben Shelly to ask for the resignation of one of his top officials.

Fred White, who served as director of the Division of Natural Resources ever since Shelly became president in January 2011, turned in his resignation in early August.

At the time, his resignation was blamed on his failure to have staff protect Navajo ranchers from having their personal horses confiscated during round-ups this past summer to reduce the number of feral horses on the reservation.

CHINLE — An audit of Leupp Chapter released July 25 confirmed some chapter members’ suspicions that the previous chapter administration was playing fast and loose with chapter funds: Some $456,000 appears to have been spent without going through the proper protocols.

What it does not reveal, according to one chapter member who pressed for the special audit, is a family dynasty that kept a stranglehold on chapter funds for years and never questioned each other.

“They were all related,” said Violet White, noting that the chapter’s administrative assistant at the time, Arlene Jensen, is former chapter president Thomas L. Cody’s sister; former vice president Lorraine Noline had been married to Cody’s brother; and former secretary/treasurer Rosita Kelly is currently married into the family.

To complicate matters, White said, Cody is also a brother to the man who was the chapter’s Council delegate at the time, Leonard Chee, so the chapter members had nowhere to take their complaints.

Cody says he, Jensen and Chee are cousins, not siblings, and pointed out that former chapter manager Clara Tsosie, who got most of the blame for the misspending, is married into White’s family.

WINDOW ROCK — Jury selection for what looks like will be the longest jury trial in the Navajo Nation’s history will begin on Oct. 14.

That was the announcement from Window Rock District Court Judge Carol Perry on Friday as she set the dates for five current and former Navajo Nation Council members who are facing charges dealing with the misuse of discretionary funds.

Those who will be on trial are current members of the Council Johnny Naize, who is still on administrative leave with pay as speaker, and David Tom, who ran for but was unsuccessful in getting enough votes to run for the general election.

Former Council members George Arthur, Leonard Teller and Ernest Yazzie Jr. will also be on trial at the same time.

Attorneys for the five tried unsuccessfully to get the cases separated whereby each would have their own trial but special prosecutors argued that this would be a lot more expensive and take up a lot more of the court’s time.