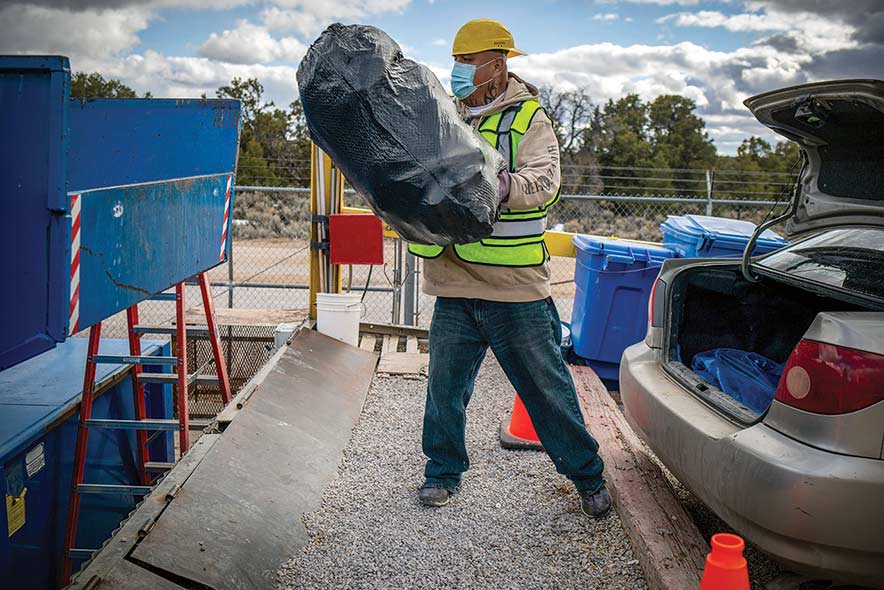 Navajo Times | Sharon Chischilly
Derek Charley, one of two attendants at the Bááháálí-Chichiltah Regional Solid Waste Collection and Recycling Center, hefts a bag of trash into the compactor. The facility is currently seeking money to have the compactor serviced.

Although nearly everyone would agree trash disposal is a huge problem on the Navajo Nation, it hasn’t gotten much besides lip service from the tribal government.

The Navajo Nation Environmental Protection Agency is backlogged for years on illegal dumping complaints, and there is no comprehensive waste management system on the Navajo Nation.
In 2016, under director Carl Smith, the Division of Community Development scrapped its solid waste program, which was supposed to support chapters in their efforts to control the problem.

The following year, a bill introduced by Delegate Kee Allen Begay Jr. to implement DCD’s Integrated Solid Waste Management Plan never made it out of Council.

Undaunted, two middle-aged women in neighboring chapters south of Gallup have forged ahead, taking the trash problem — sometimes quite literally — into their own hands.

They have created a collaboratively run transfer station and recycling center that has gotten high marks for cleanliness and efficiency from users and federal inspectors alike.

That seems to be true. Even on the blustery day the Times arrived for a tour, not a single aluminum can or hamburger wrapper could be seen blowing around the Bááháálí-Chichiltah Regional Solid Waste Collection and Recycling Center, which is located exactly halfway between the Bááháálí and Chichiltah chapter houses on New Mexico State Road 602.

You couldn’t smell the garbage, and the little office the two attendants work out of was sparkling.

The last inspector, Hannah said, told them he can usually spot a transfer station just from the litter at the turnoff, but that’s not the case here. He and Charley take pride in keeping it as clean as a dump can possibly be.

How did this minor miracle come about?

The station was basically willed into existence by John and her counterpart in neighboring Bááháálí, chapter manager Gloria M. Skeet. 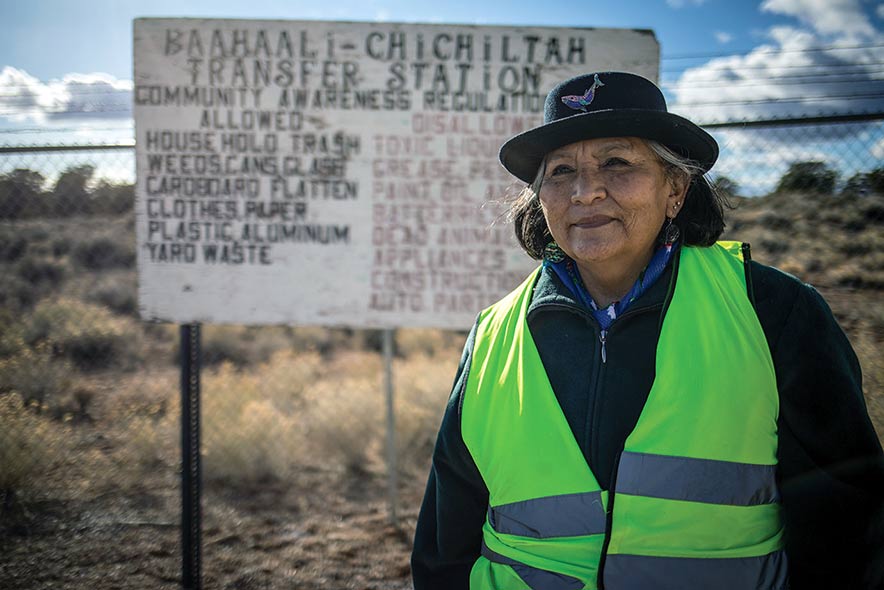 As Skeet tells it, the facility first opened as a landfill run by the U.S. Indian Health Service in 1975. It was closed and filled three years later, then taken over by McKinley County as a transfer station (which means the garbage is allowed to accumulate for a while and then transferred to an actual landfill).

In 2005, the county pulled out of the trash business, and a meeting was called between the county, the BIA and surrounding chapters to come up with a next step.

Skeet had just been hired by Bááhááli Chapter after spending 19 years in Minnesota, where no one had to think too much about garbage. She doesn’t remember exactly how, but by the end of the meeting it was decided the station would go to Bááháálí.

“I was told, ‘You now have total ownership of this transfer station,’” Skeet recalled. “I thought, ‘Oh, my goodness, what are we going to do now?’”

Having grown up in the area, she knew the importance of the dump to the community and wondered what people would do with their trash if it closed.

“I couldn’t fathom shutting it down,” she said.

She also knew there was no way little Bááháálí, with fewer than 1,000 people at that time, could run a transfer station by itself. She engaged neighboring Chichiltah and Tsé Lichii chapters to help (Tsé Lichii later dropped out of the collaboration).

“We didn’t know what we were doing,” admitted John. “Neither of us had ever had to deal with waste management before. But we were determined to learn.”

They had some support. Delegates Charles Damon and Joe M. Lee put a lot of their discretionary funding into the effort, Skeet recalled.

0Arbin Mitchell, then head of the Division of Community Development, provided guidance and encouragement. McKinley County Commissioner Genevieve Jackson convinced the county to pay for personnel training, since the county had basically dumped the trash problem in the chapters’ lap.

Over the next four years, the three chapters developed a strategic plan, a business plan, a policy manual and got chapter staff certified in waste management. Each chapter provided and paid for one attendant.

The Red Rock Regional Landfill in Thoreau, New Mexico, agreed to accept the trash, as it had while McKinley County was operating the station.

Possibly the most distasteful task involved with operating a transfer station is the government-mandated biennial “trash audit,” but Skeet and John are out there for every one.

One of the attendants randomly picks 15 trash bags and the staff spreads out the garbage and sorts it into such categories as food waste, paper, plastic, glass and diapers.

In the first audit, Skeet and John were shocked to discover 79% of what people were throwing away was recyclable.

“That’s when we decided to go into the recycling business,” Skeet said. “We just could not in good conscience continue to throw all that stuff away.”

To encourage people to recycle, it’s free. All community members have to do is sort their items and bring them to the station.

Generally the station accepts corrugated cardboard, mixed paper, No. 1 and 2 plastic and tin cans. But because of the pandemic, Red Rock is limiting what it accepts and it’s currently just cardboard and plastic.

They don’t accept aluminum cans because they don’t want to compete with Bááháálí Chapter, which collects soda cans and sells them to a metal processor to raise money for its popular intergenerational weaving classes.

Fees for the dump are kept low so people won’t resort to the many illegal landfills that dot the canyon-crossed pygmy forest south of Gallup.

Of course, that amount doesn’t begin to keep the station running.

“Solid waste is not a money-making business,” declared Skeet, shaking her head. “Ninety-five percent of the landfills and transfer stations in the country are subsidized by a county, state or municipality.”

In this case, the tribe pitches in (thanks mostly to Speaker Seth Damon, who hails from Tsé Lichii and has convinced the Council to pony up over $57,000 over the past few years), and New Mexico Capital Outlay funds have been employed for improvements to the road, fence and office (including a flush toilet and emergency shower, which it didn’t have before).

As a certified chapter, Bááháálí can apply for grants like the New Mexico Tourism Department’s New Mexico Clean and Beautiful fund, which they hope to use for a series of special cleanup days around Earth Day.

They’d also like to find funding to hire a college kid or two to do community outreach on the transfer station and what kinds of things it does and doesn’t accept (no hazardous chemicals; no bio-waste like insulin needles, for example).

Eventually, they’d like to have their own garbage truck.

But Skeet and John are just two people, and they’re starting to burn out.

“This is a lot of work,” said John. “People have no idea how much work this is, and then we have our other chapter duties on top of it.”

“We need to make this sustainable,” said Skeet. “The tribe needs to have a plan for solid waste.”

“And they need to fund it consistently from year to year,” added John. “The chapters shouldn’t have to go around on their knees begging from anyone we think might help us.”

Skeet noted only 22 of the 110 chapters have any kind of solid waste disposal, and only two, along with Kayenta Township, offer recycling.

Ultimately, she said, the tribe needs to take responsibility for the problem, maybe adding a one-cent sales tax to provide a sustainable funding source.

“And it’s ridiculous that chapters as far away Chinle have to haul their trash to Thoreau,” she added. “We should have a certified, environmentally sound, sanitary landfill on the Navajo Nation — several of them.”

The DCD could also certify some employees as trainers in solid waste management so people don’t have to travel to the border towns for training … in fact, it could charge people from off the reservation to come in, Skeet suggested.

“This isn’t a chapter-by-chapter business,” she added. “It needs to be regionalized. Most chapters just aren’t big enough to pull it off.”

In the meantime, though, little Bááháálí and even smaller Chichiltah forge ahead. They can’t stop now; the community has become too dependent on its transfer station.

“When we closed for a while because of COVID,” Hannah recalled, “people found out where I live and just started dumping bags of trash at my turnoff. What could I do? I just put it in my truck and took it to the station.”