‘I worked hard to get here’: Farmington softball player signs to play in Texas 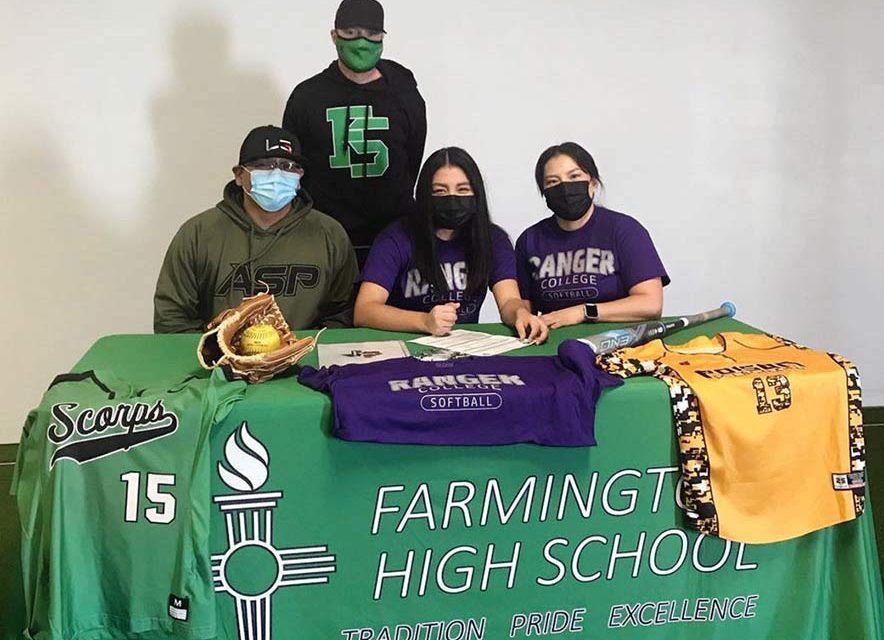 Autumn Thomas, Kinyaa’áanii born for Ta’neeszahnii, is a senior softball player for Farmington High who signed to play at Ranger College in Texas.

The young athlete grew a love for the sport as far back as she could remember, being inspired by her parents who were both student-athletes as well.

When she was about 3 years old, her parents signed her up for T-Ball. From there she played softball at 8 years old. Before she knew it, she was playing JV in the 8th grade before joining varsity in high school.

“What makes me want to play it the most is that I get a feeling that I love, just being on the field,” Thomas said. “I love it when you just step on that field, when you get a different feeling, a different mindset that I take myself into.

“It’s kind of like a stress reliver type of thing and every time I get really happy, I get really excited to play the next game and just to see different people and see how they play,” she said.

She usually plays shortstop or second base. She believes her skills include getting to the ball and communicating with her team.

Thomas used to play with older kids, usually with girls two or three years older than her because her skills were more advanced than others in her age group.

She was in 8th grade when she first met her varsity coach, Tim Trotter.

“I disagree with Autumn when she said she’s not good with hitting,” Trotter said. “She is one of our most consistent bats on the lineup.

“She played 30 games in her sophomore year, which is a lot, and she bat over 350 times so I think that’s really good as a sophomore,” he said. “Statistically she is always sound with defense, so that makes that part easy and she has good team speed, so she’s not slow, that’s always a plus.

“She always had a good arm,” he said, “so obviously being a shortstop, you need to have a strong arm and she’s always been able to do that ever since she was young.”

Trotter remembers the first time he saw her play in a game. She was new to the JV team and on that day he hadn’t planned on her joining varsity but when his shortstop was injured, he chose Autumn to fill the spot.

“Personally, I think it’s when you watch her on the field, she is very positive,” Trotter said. “She doesn’t really show she gets frustrated, but she does a pretty good job at not showing those really highs or really lows.

“I also think just the fact she has good feet and good hands, I think those things are really a positive,” he said.

Thomas didn’t play in her freshman year but did her sophomore year where she helped the team go to the 2018 Class 5A state tournament. Although they lost, the team still had victories the following year, playing schools and in tournaments.

Trotter is proud of his team for their accomplishments but feels they got robbed of a good season when the COVID-19 pandemic occurred last year. He is hopeful there will be a late season this year to show their skills.

Thomas was pleasantly surprised to get the invite to play at Ranger College. Their softball coach came out to meet her.

“It makes me very grateful because I worked hard to get here and everything,” Thomas said. “With a lot of support and help from Tim Trotter, then my club softball team helping to get me into college and then just seeing what Ranger College had.”

She plans to enter the nursing program and after her second year to study for her nursing degree.

“After my two years, I really want to try and go further into it,” she said, “get better at the sport from the college coaches and, with a little bit more help, go on to a bigger university and try to make that my goal.”

Thomas hopes to continue playing the sport that she loves. She chose Texas because of the promise of new opportunities and even a chance for her new team to play abroad.

“It means so much to me because I inherit it from my parents,” Thomas said. “They grew up playing in high school, same thing, they got brought up to varsity in 8th grade and freshman year and I just probably want to take it further than what they did and try to get my goal to do better than them from what they did.”

Trotter also noticed how close Thomas is to her family and believes having a strong base is always important for any young athlete.

“Her family has been awesome,” he said. “She has mom and dad who likes to play, grandma and grandpa who love to come and see everything.

“We don’t have a lot of families these days where you get to see so much support,” he added, “and so I think it helps with those lessons and I think those will help us later in life.”

Although the pandemic has affected her grades slightly and she feels like it’s been forever since she last played, Thomas found a club in Albuquerque and hopes to play a few games before heading to college.

“Or practices,” she said. “I love going to practice and just having that strong connection with the girls.

“And I also like to thank my family members for supporting me all the time,” she added. “I know I’d have self-doubt and they would always pick me up and to see what I’m capable of.”