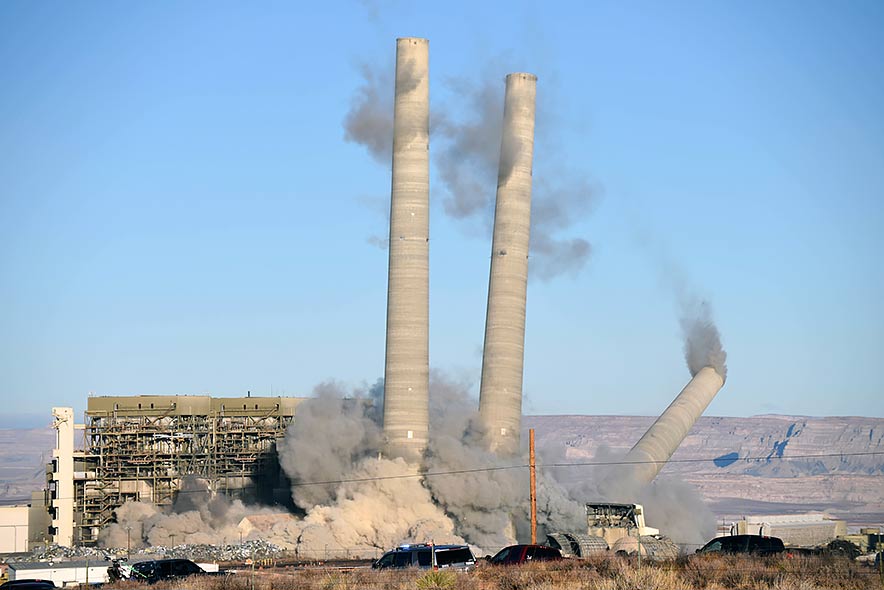 Special to the Times | Krista Allen
Units 1, 2 and 3 fall down during the implosion of the Navajo Generating Station on Friday morning, Dec. 18, 2020.

It took three years to construct Navajo Generating Station’s three 750-megawatt electric generating units, but it took only 50 seconds to bring them down.

Unit 1 (north) followed by Unit 2 (center) and Unit 3 (south) all came down on Friday morning as demolition crews from Dykon Blasting Corp. imploded the plant.

The Navajo Times was given morning updates and a 5-minute countdown that started at 8:28 a.m.

A series of explosions erupted over a 10-second span between blasts, said George Hardeen, spokesman for the Navajo Generating Station.

Hardeen said longtime NGS employee Lemuel Brown, originally from Kaibeto, Arizona, was the one who pressed the buttons to detonate the first explosions as the units began to crash down. Brown worked at NGS for 36 years.

The fuel supply for the electric generating units was low sulfur bituminous coal transported by electric train from the defunct Peabody Western Coal Company’s Kayenta Mine, about 78 miles southeast of the plant.

“I’ll always carry NGS with me – the memories,” said Keno Zahney, who worked at NGS for five years until it shut down in 2019 after which he relocated to New Mexico.

“The co-workers that are there, I still communicate with them,” he said. “They’ve become lifelong friends. We check on each other to make sure everyone’s healthy.”

Zahney, who started with overhaul and then transferred to the railroad, said he checked in with his former co-workers over the last week leading up to the implosion.

“We talked about memories and what we’ve done and the amount of work we’ve done,” Zahney said in an early morning interview.

“The job was a blessing,” he said. “We received a lot of knowledge and training through (NGS operator Salt River Project’s) programs.”

He added, “I just want to thank everyone who I worked with. This was a blessing for my wife and my kids during the time I was there. NGS will always be there with us.”

Zahney said he didn’t want to watch the units come down on Friday morning, only to keep the memories. 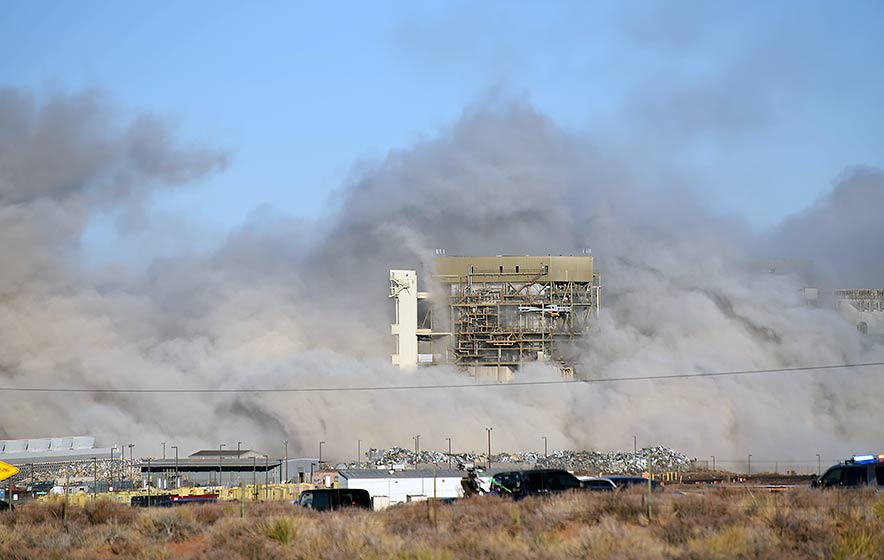 Special to the Times | Krista Allen
All that’s left of the three towers that had marked the Navajo Generating Station is clouds of dust after the plant was imploded Friday morning.

For others, the units coming down showed a change of the times.

“And new beginnings and transition,” said Coconino County District 5 Supervisor Lena Fowler, who watched the implosion from LeChee with a small group of people.

Fowler said when she was elected in 2009 the discussion at the time was the plant would shut down in 2044. But that changed after shareholders of the plant voted on Feb. 14, 2017, to close the coal-fired power plant at the end of 2019, citing high electricity costs.

“It has moved the Navajo Nation into a modern economy and now, we’re going to have to figure out how we’re going to replace that economy that it had established,” she said.