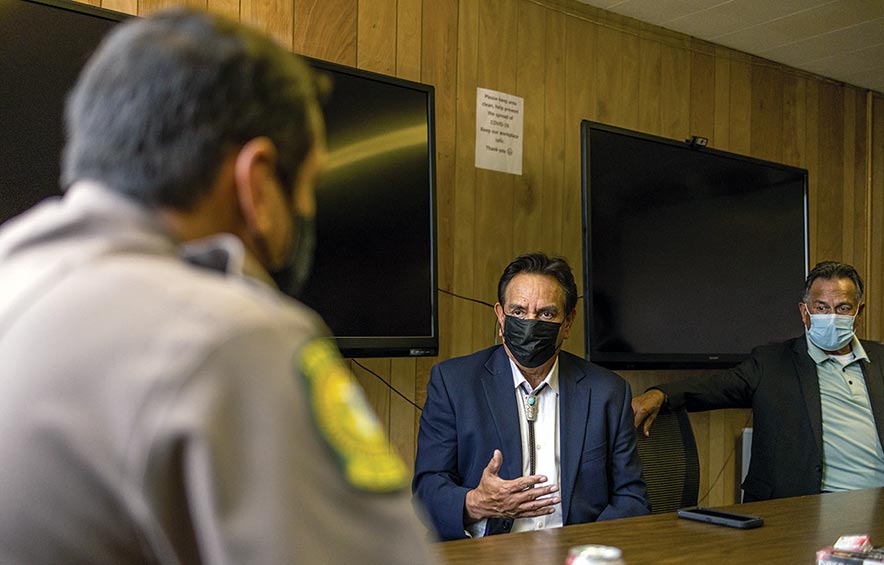 Cherokee Nation Tribal Council Speaker Joe Byrd came to Window Rock July 22 to discuss a treaty with the Navajo Nation that will exercise sovereignty and begin inter-governmental relations in support of one another.

Byrd recollected that 25 years ago, the discussion about a treaty began with several tribal leaders including the late former President Albert Hale.

“As tribes who survived the Long Walk and the Trail of Tears, we are survivors,” said Byrd to the Navajo Nation Council. “But as longtime allies, if we work together, there’s nothing we can’t accomplish.

“The (proposal) talks about what would the world think,” he said, “if two of the largest nations, representing close to one million people, came together and talked about how we could help each other out in the areas of health care, jurisdiction, law enforcement, domestic violence against women.”

Talking with Council was just the first stop for Byrd. He also wanted to speak with Navajo Police Chief Phillip Francisco to get advice on how Francisco manages the largest tribal police force.

It’s been one year since the U.S. Supreme Court ruling of McGirt v. Oklahoma, which stated that Oklahoma does not have jurisdiction over cases against American Indians for crimes allegedly committed on tribal land.

“This McGirt decision just really led us into how are we going to handle the magnitude of what we have now?” he said.

“If the Supreme Court of the United States made this ruling,” he said, “how are they’re going to assist us financially to carry out this decision?”

The Cherokee Nation Marshal Service is a certified law enforcement agency with jurisdiction throughout the Cherokee Nation. The service is cross-deputized with 50 municipal, county, state and federal agencies.

With more than 32 deputy marshals, the agency offers an array of special teams focused on prevention and justice in criminal activities, according to its website.

“We cross-deputize,” said Byrd. “We have a 14-county jurisdiction there. Tulsa, Oklahoma … all Tulsa east to the Arkansas line is mostly Cherokee jurisdiction.

“I know you have a much larger jurisdiction than what we could ever thought about,” he said. “So we thought we’d come and hear thoughts and ideas that you guys are doing at this time.”

Francisco, who has been chief for five years, has a 20-year career in law enforcement, working for the Aztec and Farmington police departments, as well as the San Juan County Sheriff.

He is an Army veteran and was a member of the New Mexico Nation Guard.

Francisco advised giving the police force and chief leeway and authority, and to be mindful of the influence of tribal bureaucracy.

He used his situation with NPD as an example. He advised Byrd to trust that their police force and police leaders are doing what’s needed.

If government gets too involved, he said, that can negatively impact the course and slow down processes.

“The Navajo government is complicated and it takes a lot for the Navajo Police Department to do things,” said Francisco. “Hiring, procurement, spending money – it really hampers our ability to expand and react to the needs of the community.

“Give them the authority on hiring and move some of the bureaucracy out of it,” he said. “This will give them the ability to do things more effectively and quicker.”

When Francisco came on board as chief, one of his goals was to restart the Navajo Police Academy, which had closed years earlier.

Off-reservation police academies proved not beneficial because training was catered for outside departments.

There was also high dropout rate, and recruits needed extra support. Francisco decided the police academy needed to be tailored to Navajo needs.

“Before I got here, we were sending officers to Arizona,” he said. “It wasn’t a good fit for our police department. So we started our own academy, teaching them the laws they need to know.

“We are able to help foster them, teach them, get them to the point of being good officers and have a good connection to the community,” he said. “We are the only tribe that has their own police academy run by its own staff.”

After investing time and effort into the police department and recruiting, Byrd asked, how often do officers leave the department for other jurisdictions?

Francisco replied that this isn’t a problem. It does happen at times, he said, but not as much.

“We are unique here,” said Francisco. “People want to work here. It’s our own people working. Ninety percent of them are Navajo, live on Navajo, so they have an invested interest in staying.”

Byrd said his reservation is surrounded by different municipalities and, if they train their officers, outside departments will try to recruit them, which is a concern but for the most part tribal officers want to stay and work for their tribe.

“When I first got here we were paid significantly less than our bordering agencies,” said Francisco. “That was one of my first initiatives, making the pay more equitable to the cities and counties around us. Now we are actually a little bit above.”

Benefits and pay, Francisco said, is why he believes many officers don’t leave.

“You’ve been helpful,” said Byrd. “Benefits, cross-deputization, and I like how you retain your officers. You put pride in them. With all that training they’ll want to stay and work for their tribe.”