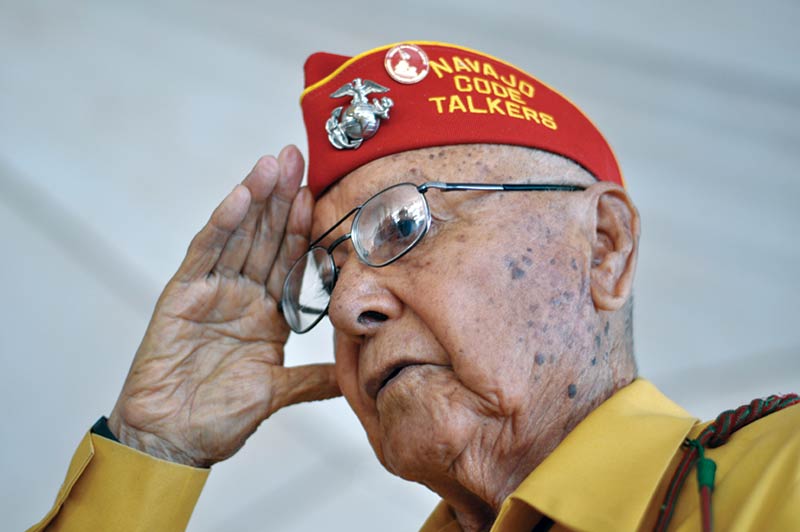 The Navajo Nation on Aug. 14 will pay tribute to men known around the world for their contributions during World War II.

More than 430 young, Navajo-speaking men were recruited in 1942 to help develop and use a wartime code based on the Navajo language. The code, used in the Pacific Theater, proved unbreakable, confounding the enemy and helping the Allied Forces to win the war.

After landing on the beach of Iwo Jima, Japan, the Navajo Code Talkers successfully delivered more than 800 encrypted messages transmitted by radio and telephone, relaying important information about troop movements and field operations. Their efforts prompted Howard Connor, 5th Marine Division signal officer, to state that, “were it not for the Navajos, the Marines would never have taken Iwo Jima.”

Now, on a day set aside just for them, the Navajo Code Talkers will be the guests of honor at a variety of events held in Window Rock.

“It’s really important that we continue having this event because we have under 20 surviving Code Talkers,” said Michael Smith, organizer of the Code Talker Day celebration. “The time is coming when we won’t have any left.”
Festivities begin with a 9 a.m. parade, which starts at the parking lot of the Navajo Nation Museum and ends at the Window Rock Tribal Park and Veterans Memorial. Surviving Code Talkers will ride on a designated float, and families of Code Talkers who have passed on are invited to create memorial floats to honor them. 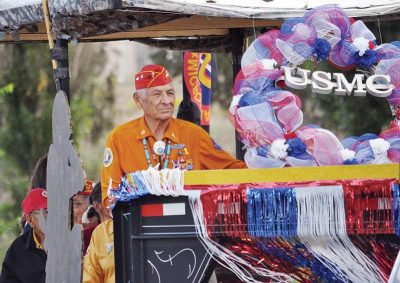 The plan, Smith said, is to honor as many individual Code Talkers as possible.

“If a Code Talker doesn’t have someone to create a float, we can make one,” he said. Veterans groups also invited to march in the parade and bring their own color guards.

More than 175 Young Marines from across the country also will march in the parade and escort the Code Talkers. The organization, open to youth ages 8 to 18 in the United States and Japan, has participated in the event since 2006.
“The contribution of the Navajo Code Talkers to America’s campaign in the Pacific is a fascinating period in our history and one that should not be lost,” said Mike Kessler, national executive director of the Young Marines.

“Just being around these special veterans makes us feel as though we are able to take a step back in time.”

The day’s agenda also includes an honorary reading of the Code Talkers’ names and musical performances. A luncheon takes place at noon, followed by gourd dancing from 1 to 5 p.m.

The celebration, which started in 2006, has grown exponentially, Smith said. About 200 people attended the first event, and organizers anticipate as many as 2,000 people this year.

“This is our tenth year and we’re still growing,” Smith said.

National Navajo Code Talkers Day was declared in 1982 by then-President Ronald Reagan. The recognition came 40 years after the campaign and 14 years after the U.S. declassified the operation, allowing the Code Talkers to open up about their service and the details of the code.

In 2007, the Navajo Nation Council passed a resolution declaring Aug. 14 a Navajo Nation holiday. And last year, Gov. Jan Brewer signed a bill that officially designates Aug. 14 as Navajo Code Talker Day in Arizona. That bill passed unanimously in both the state House and Senate.

To honor the important contributions of the Navajo Code Talkers, the Science Foundation Arizona in partnership with Arizona State Sen. Carlyle Begay will also officially announce the creation of an education project – the Code Writers Education Initiative.

“The Initiative will bring together organizations from business, philanthropy, education and government to create a technology-based education for Navajo school aged children,” said Ken Quartermain Jr., director of the Science Foundation Arizona in a prepared statement. “Bringing an unprecedented coalition of some of the most important global business organizations and leaders to focus our combined talents and resources today to impart to Navajo children the vision, the inspiration, the opportunity and the choices available to them through a technology-based education that will prepare them for the 21st Century global workforce.”

As the Nation celebrates its local heroes, however, it also will pay respects to the 70th anniversary of the day the bloodiest war in world history ended. On Aug. 14, 1945, Japan announced that it had officially surrendered to the Allies, ending the war.