COVID survivor wants others to learn from her experience 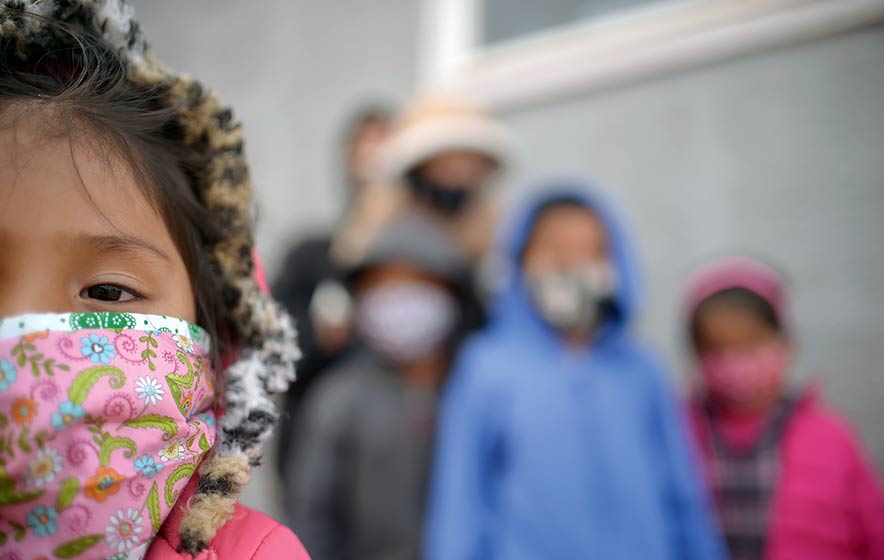 Navajo Times | Donovan Quintero
This family, who asked not to be identified, tested positive for COVID-19. The mother of the family wanted to share her experience to encourage others to mask up and not attend large gatherings.

When a mother of seven got the word she tested positive for COVID-19, fear coursed through her veins. She never imagined she or her kids would ever contract the highly contagious virus.

“I felt scared when I first tested positive,” she said, requesting anonymity. “I found out my kids were positive too. That’s when I had to tell myself, ‘OK, as a family we can get through this.’”

She remembered tears filling her eyes. She fell silent and could not find the words to express what she was feeling. “But my babies came to me and told me, ‘Mom, we’ll be OK. We can get through this,’” she recalled. She wiped her tears and calmed herself down.

Sick or not, the mother in her told her she was going to survive this. “When it comes to your kids you would do anything to stay alive. As a single parent I had no choice but to fight this COVID-19,” she said. It was in September when Sage Memorial Hospital told her she had caught the virus. She was occupied with helping her younger kids with online schooling, which was already challenging because connectivity was usually slow.

She did not go into detail about who gave the virus to her father and uncle, but said “someone” who had attended a ceremony had given the coronavirus to them. The ceremony she was referring to, which President Jonathan Nez mentioned on Oct. 2, was held in Nazlini, Arizona.

According to Nez, a person attending the ceremony had traveled to Salt Lake City and contracted the virus there. More than 40 people who had attended the ceremony contracted it.

When her father began coughing and getting feverish and was unusually tired, she knew he had the coronavirus. Soon after, she also started feeling feverish. “I had the symptoms and it started with a headache then getting chills,” she said. “Man, it was ugly – feeling achy, body aching, and aching joints and muscles, headache all the time. I also did not want to eat and I had a hard time sleeping.” She also lost her sense of taste and smell, which is one of the common symptoms. “It was not good,” she said. “People go crazy without those two senses.”

While she and her 15-year-old son got the worst of the sickness, her younger children, ages 1 to 10, did not show any signs. The only thing she noticed about them, she said, was they had headaches and did not eat as much as usual. She remembered feeling helpless because she was not able to cook for her family due to her illness.

Luckily, her mom pitched in to help care for them. “I didn’t cook,” she said. “I had my mom cook for us. She also helped me out with the shopping and laundry. I felt very helpless. The only thing I could do was to get better.”

Another thing she said that helped them fight COVID was drinking natural herbs, drinking hot Navajo tea, eating hot food, and taking walks. They live in a secluded area in the boundaries of Kinlichee Chapter and did not worry about running into other people.

She took it easy since her breathing was affected. “We were outside most of time getting fresh air, going for walks,” she said.

More than a month later, she said everyone, including her father and uncle, were healthy again. Both her father and uncle are over 65 and are now applying for the hardship assistance. She says they are even more careful than ever and she does not allow her children to travel with her when she needs to get necessities for them.

“I’m very strict about wearing masks and washing your hands and social distancing,” she said. “And staying home is the only thing that rules in the house.”

And for stubborn Navajos who don’t want to stay home, wear masks, wash their hands properly and social distance, she has this advice: “I would tell people who travel a lot to get tested before they go home to their children and families. l know what I am talking about. “Please think about your loved ones,” she said. “Life is so precious, please take care of you and your loved ones.”

She admits she never believed the virus would affect her family, but now that it is has, she can’t be stubborn about the pandemic anymore. “Most people don’t listen and very stubborn. They just want to learn the hard way,” she said. “Now is not the time for that. Only Donald Trump and his crew believe in not wearing a mask.”