With a shortage of certified Navajo Police officers, there are benefits to cross-commissioning with outside law enforcement agencies.

In addition, tribal police already possess limited authority over non-Natives on reservations. Cross-commissioning with outside agencies can provide help and added jurisdictional authority.

On Wednesday, five certified police officers with the New Mexico State Police were sworn in after completing two days of training provided by Navajo Police Sgt. Wallace Billie of the Window Rock District.

“These officers can enforce Navajo Nation criminal and traffic laws on the Navajo Nation, and to provide more resources and assistance for us,” Billie said on Wednesday. 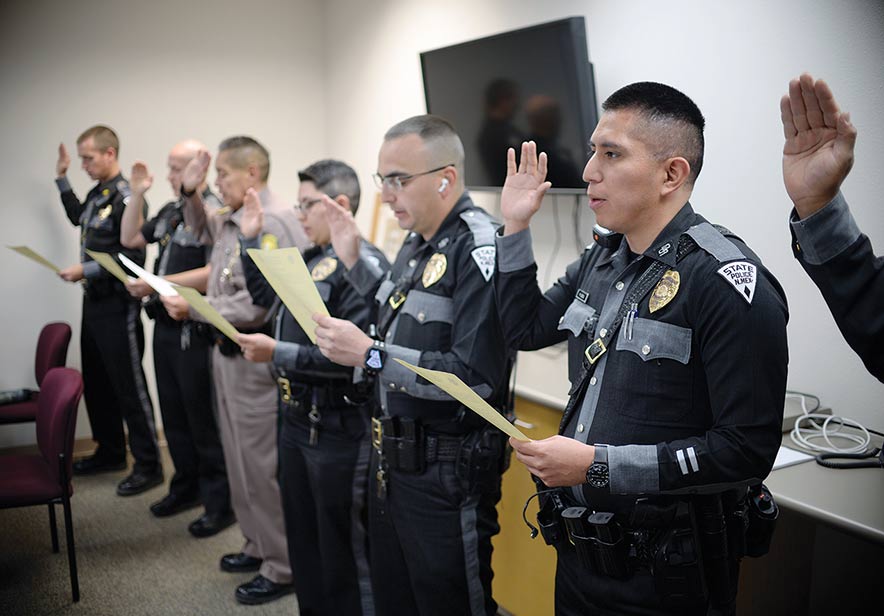 The addition of the five officers now brings the total number of cross-commissioned police officers to 126, said Billie.

He said the officers, who are not Navajo, learned about the culture, customs, and tribal laws that Navajo Police enforce.

“We started off with the Diné,” Billie said on Monday. “Talking to the outside law enforcement agency about Navajo traditions, Navajo beliefs, taboos – not an overall knowledge but at least an understanding of Navajo.”

On Monday, New Mexico State Police Lt. Shawn Martin said the department also gives tips on the dos and don’ts of the Indigenous tribes for which they provide police service.

“They don’t just go straight right into arresting, booking procedures,” Martin said. “They actually start off with, like, learning about Navajo culture.

“Earlier, I was in there,” he said. “They’re talking about the hogan. And for non-Natives who are state police officers have no idea what a hogan is.

Martin said two of the training officers are from Virginia and California.

Billie said Navajo Police currently have less than 200 officers. With the cross-commissioning of the outside officers, they could aid, make arrests, or issue tribal traffic citations.

“What a lot of people don’t understand is 30 to 40 of those commissioned officers are supervisors,” Noon told the Navajo Times. “When you’re talking about actual officers on the road responding to calls, it’s probably more like 130 to 140.”

“As you hear nationwide, there’s a shortage of law enforcement officers,” Martin said. “And within District 6, it encompasses McKinley County and Cibola County. With McKinley County, about maybe 60% to 75% is the Navajo Reservation.

“Most of our calls are helping out Navajo Police,” he added. “It’s a good incentive for us to be cross-commissioned and to have our troops out there working with Navajo Police.”

“Allocation of jurisdiction among these sovereigns depends on the type of criminal conduct alleged and the Indian or non-Indian status of the alleged perpetrator and victim,” the memorandum said. 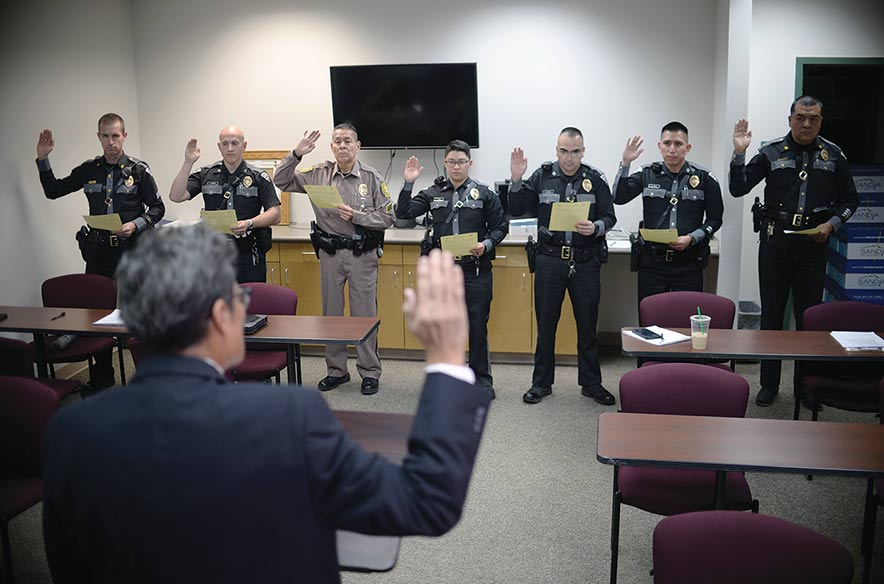 Tribal police, the memo read, can only exercise civil jurisdiction over non-Natives in Indian Country, such as issuing traffic citations for traffic violations.

With cross-commissioning given by the New Mexico State Police through formal written agreements, tribal police could arrest, charge, jail, or prosecute non-Native offenders for violation of state law.

Billie provided an example and highlighted a July 9, 2021, incident when two children were allegedly taken from the reservation.

In New Mexico, for a tribal police department to get a state cross-commission, the department must submit proof of liability and property damage insurance for police vehicles and complete a 400-hour basic police training that the New Mexico law enforcement academy approves.

After taking the oath of office given by Navajo Nation Judge Leonard Livingston, Billie thanked the officers for their continued assistance.

“Stay safe out there,” he said.