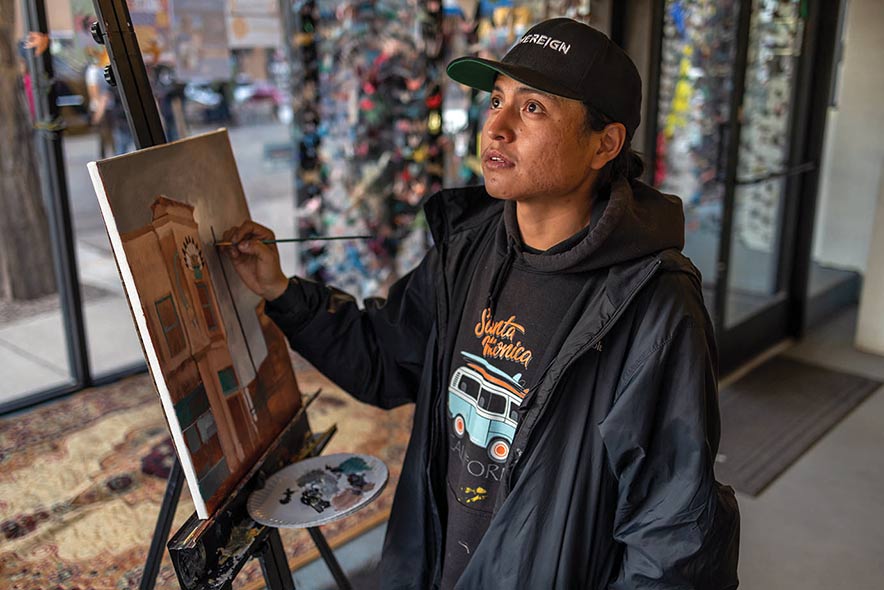 Special to the Times | Sharon Chischilly
Armond Antonio looks up as he paints the building outside Gallup's ART123 Gallery during his show, "Walking in Gallup," on Saturday evening.

Diné artist Armond Antonio displays his artwork for his show, “Walking in Gallup,” and brings attention to the way unhoused Native people within Gallup are dehumanized.

This issue impacts everyone within the community, bringing light to an issue that is largely ignored, he said.

“Walking in Gallup,” is Antonio’s first show in a gallery and he attempts to show Gallup through the eyes of unhoused people through his artwork.

Antonio is from Gallup and says that is what makes this gallery special since it is located in Gallup, a place where he was born and grew up.

Antonio is the first of a series of five guest curators and artists who will focus on a social justice issue of their choice over the following months with the ART123 gallery.

Rose Eason, executive director of gallupARTS, said the selection of Antonio was made by a diverse committee and she is glad they chose Antonio.

“The criteria were pretty flexible but it was about the creativity of the concept, the relevance of the social justice theme to our community, the approach the artist wanted to take to addressing that theme, you know a contentious and effective approach, and I think this show (Antonio’s art show) is all of the above,” Eason said.

She also said that throughout the process, she believes Antonio was pushing his own boundaries by creating new art, such as the wire sculpture that is on display, and was in turn pushing the boundaries of the gallery to conceive of a gallery show in a different way.

Eason also said the way he proposed to do the show is meaningful. A lot of people tend to think of homelessness and treat it in a surface level manner and she said that is not what Antonio is doing, instead he is putting the issue into a personal perspective.

“He proposed to kind of think of it from more of a human personal perspective and to consider what it means to actually be experiencing homelessness in Gallup, living on the streets, and a lot to do with the issue of boundaries or borders and traversing those or crossing them and the way our community is siloed,” she said.

Eason hopes this art show will cause people to take a walk in the shoes of unhoused people and to think about the underrepresented and misunderstood experience within Gallup.

‘This is our community’

Antonio chose to focus his art show on the issue of homelessness due to most of the unhoused population in Gallup being Diné and coming from the surrounding Navajo Nation.

He said the issue is bad because they do not get any help or support from the community.

“It (homelessness) kind of effects the whole community because the Navajo Nation surrounds the area (of Gallup) and it kind of just seems like a lot of my relatives are the only ones effected by homelessness here in Gallup,” Antonio said. “It’s really bad because people get chased out of stores, so that’s kind of what my main focus is on.

While homelessness is the focus of Antonio’s artwork, he also hopes to show the culture in Gallup which, to him, is a mix between traditional Native culture and urban, modern culture.

“It’s (the culture in Gallup) a lot different from the 60s, the 70s, and even way before that,” Antonio said. “Now you see the art scene changing and I kind of wanted to display that and promote that in my work because now you have a lot of Native children who are skateboarders and all these different talents, and I wanted to show that off because this is our community and there is all different styles of art and technique.”

In his work, he also wanted to show businesses that wholesale Native jewelry seems to not care about the community.

“A lot of these trading posts, they seem to not really care about the community but only their business and it sort of feeds off the Native community,” he said. “That’s kind of like what I want to change, down the road, and sort of promote other artists.”

He said he hopes to show that these issues, especially homelessness, impacts everyone.

“So that’s kind of what my main focus is on (homelessness), you know, it doesn’t just affect me, it affects everyone,” Antonio said.

“Walking in Gallup” will be on display at ART123 Gallery in downtown Gallup until May 7. The gallery is open 12 p.m. to 6 p.m., Tuesday through Saturday.