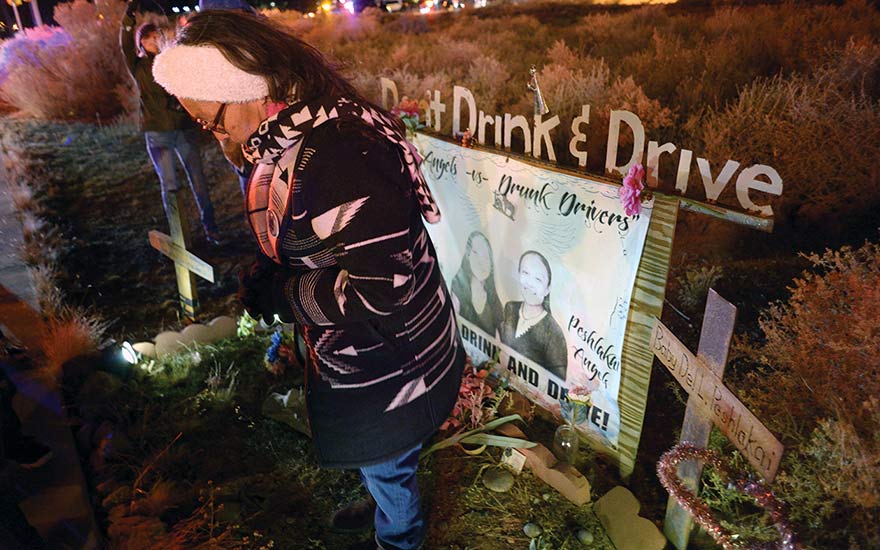 Navajo Times | Donovan Quintero
Darlene Peshlakai, who lost her daughters, Deshauna and Del Lynn, when their vehicle was struck by a drunk driver on March 5, 2010, stands by their memorial site on Sunday night in Santa Fe.

On the surface, Darlene Peshlakai of Naschitti, New Mexico, smiles and laughs and doesn’t hesitate to give anyone hugs, deserved or not.

The mother and grandmother says she dedicates all of her time to her family, helping her community’s high school athletes, sponsoring rodeos, and leading bike runs, all in the name of combating drunk driving.

But the latter is something she never dreamt of doing.

That all changed nine years ago on March 5, 2010, when her two daughters, Deshauna and Del Lynn, were killed in a car crash caused by drunken driver James Ruiz.

The loss, she said, is a feeling she wakes up and goes to sleep with, and everyday she and her husband, Dave Peshlakai, wake early in the morning and work into the night so that they can fall asleep easier and quicker.

On Sunday evening, the still-grieving parents bundled up to participate in the Santa Fe Police Department’s fifth DUI checkpoint held in commemoration of the two girls.

The checkpoint was at the intersection of Cerrillos and Cristos roads, where Ruiz struck the car the sisters were riding in from behind. The crash occurred after a basketball game at Santa Fe Indian School.