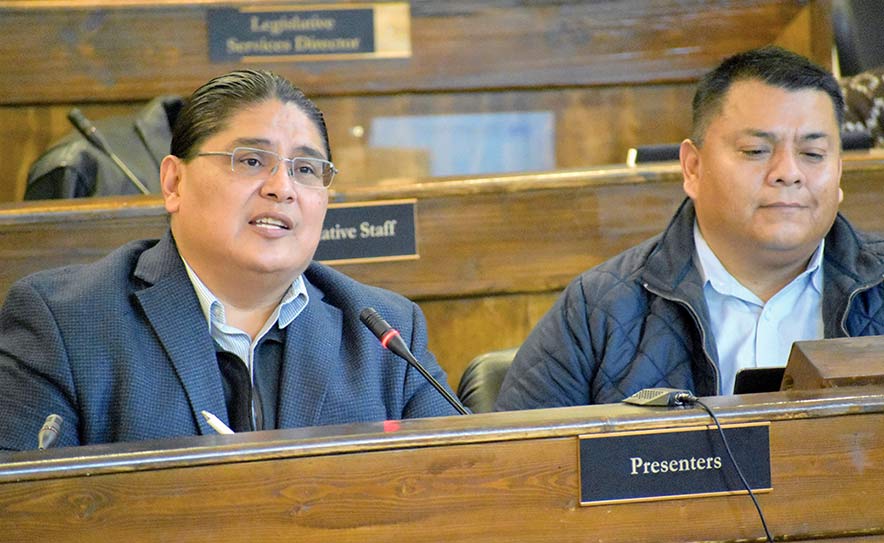 Those in attendance at last Friday’s Resources and Development Committee work session were treated to a surprise presentation that affirmed the value of having experts in the room when determining the course of the Navajo Nation’s energy policy.

“If you look at the Nation’s energy landscape, what you see are a lot of different parts,” said former Navajo Nation presidential candidate Christopher Deschene. “One of the basic questions is, What is the pathway for your development? Where are you going? What are you doing to create, grow and advance policies so that it supports our overall economic development, our infrastructure, and security?”

By invitation of RDC Chairman Rickie Nez, Deschene and his colleague Sam Woods swooped into the council chamber in the middle of a work session dedicated to revising the 2013 Energy Policy and shared their presentation on the “Navajo Nation Energy Landscape — A Perspective from Navajo Professionals Looking Outside-In.”

“Right now the Nation has a vision and an energy policy, but you’re still missing a strategic energy plan,” Deschene said, addressing the RDC and members of the Háyoołkááł Work Group.

“I would argue and submit to the leadership that a policy is one thing but it is not a strategic energy plan because a plan has metrics, assigned resources and it has a dedicated structure to support it.”

Deschene said that a good energy plan outlines specific strategies, defines programs, and has a policy component, a governance component, and a development component that take into consideration Navajo Nation laws, codes and regulations.

“It’s very true that there needs to be a distinction between a policy and a plan. That’s reality,” said Delegate Mark Freelend. “How are we going to utilize our natural resources in a way that’s relevant to creating new revenues? We have to do it in a smart way. We can’t do it in a destructive way. It comes down to strategy.”

Deschene and Woods are seasoned energy, power, and natural resources policy and development experts as well as business start-up advisors with combined decades of experience.

Their subject matter expertise stood out at the RDC work session and one couldn’t help but wonder, where have these voices been to date?

Deschene, who served as an Officer in U.S. Marine Corps, is a former Arizona state representative, and former director of the U.S. Department of Energy’s Office of Indian Energy under the administration of President Barack Obama. He is a mechanical engineer and an attorney who specializes in tribal and federal law.

Today, Deschene and Woods offer independent consulting services nationally and work with other tribes in the areas of energy planning and development. They are equally savvy when it comes to government affairs.

Their presentation to the RDC covered topics ranging from the historical impacts of energy policies and development on the Navajo Nation to an estimated inventory of Navajo’s natural resources and their respective market values, totaling $2 trillion (excluding some resources not yet quantified), as well as a chart of Navajo Nation energy sources and consumption.

They provided an energy market overview and analysis, including fossil fuel and renewable energy trends, showed a map of existing infrastructure and facilities and electric transmission paths on Navajo, outlined funding opportunities, shared a flow-chart of regulatory requirements, and a proposed “pathway” to the Navajo Nation’s economic security.

As to the creation of a Navajo “energy office,” Deschene advises that it has to be independent and segregated in a way that it utilizes its own authorities to work with other branches within the Nation.

“Energy projects are complex so you’re going to be dealing with entities like Division of Natural Resources, Economic Development, commissions, and all branches of the government so it has to be as independent as possible,” he said.

Deschene says that an energy office should not only be a clearinghouse for projects, but a place where due diligence is carried out. It should also be a place where potential developers can come and find the answers to their respective questions.

“The main thing is if we’re going to look at waking up the proverbial giant, we need to create a strategic energy plan,” said Deschene. “From there, I think everything falls into place with policy amendments and working through the branches in creating the office.”

“The world is moving around us and we’re getting left behind,” said Deschene.

When you do an analysis of the global market and look at the global landscape for renewable energy financing what you find is entities like utilities putting together comprehensive plans, he said.

“Everybody that we deal with — PNM, SRP, APS — they all have a roadmap, some kind of integrated resource plan to address these different factors,” said Deschene.

He notes that most of the development in the U.S. is built around, not in, Indian Country, but that Navajo is one of the few tribes that have the capacity to address its own infrastructure.

However, all of that is contingent upon the Nation putting together a plan that is competitive in a market that is evolving and changing every year with new technologies being introduced.

“The price of solar and renewables is dropping,” said Deschene. “The longer we wait to develop, the less competitive we’ll be.”

“The bottom line is that we are starting to see that renewables are becoming mainstream,” added Woods.

He says renewables can also now be used to “clean up other energy systems” such solar for electric vehicles, heating, and industrialized systems.

“We’re all going down this pathway to pursue electrification, but we all end up in the same place, which is a de-carbonized energy supply,” said Woods. “That’s us at the tribal level, the state level, and the national level.”

Woods says to stay ahead of the curve, one has to realize that the future of energy is in the “integration of energy systems.”

“We have the opportunity as a Nation to not only catch up but actually leapfrog ahead on some of these older technologies,” said Deschene. “Because of the technologies that are coming out, we don’t have to do it the old way.”

Deschene points out that there are multiple sources and tiers of funding that are available to assist the Nation that should also be outlined in a strategic energy plan.

“A comprehensive plan is going to address your funding opportunities and funding structure as it relates to project development,” said Deschene.

Technical assistance is also available through the U.S. Department of Energy, he added.

Deschene believes that the Navajo courts also need to be strengthened to be able to deal with the complex rulings that come out of the energy sector.

“For example, as a developer looking inside the Nation, we cannot find one source of law that we can reference from the outside because our codes are hard to get, our case law is hard to get,” said Deschene.

For companies looking at land, taxes, and community development, it can be difficult to find the law that has precedence to deal with that because the Navajo court system is not readily accessible for information, he said.

“As developers, we start to see the disconnect because there is no existing infrastructure with regards to policies, governance and development on the Navajo Nation,” said Deschene.

Finally, Deschene reminds everyone that development can’t take place without resources such as water and power.

“Before you can even talk about getting jobs, income or revenue, you need infrastructure,” said Deschene. “Once your infrastructure is there, then entrepreneurs can go to work building projects. That’s when you have your growth.”

Deschene concluded by sharing that through his work at the DOE, he learned that the strongest and most successful tribes are the ones that have strategic energy plans.

He said it’s critically important to overcome the tendency to silo energy efforts as is the case on the Navajo Nation where departments and organizations that deal with energy issues don’t necessarily talk to each other, which stifles commitment and collaboration.

The bottom line is if individual energy plans are siloed and are not in alignment with each other, how is anyone going to find a unified pathway forward?

“The hardest part and where it fails is when tribes don’t work with all of their entities and sit down and do a strategic planning session together,” Deschene said. “It cannot be unilaterally the council, or the executive. Both have to work together to develop a strong strategic energy plan for the Navajo Nation.”