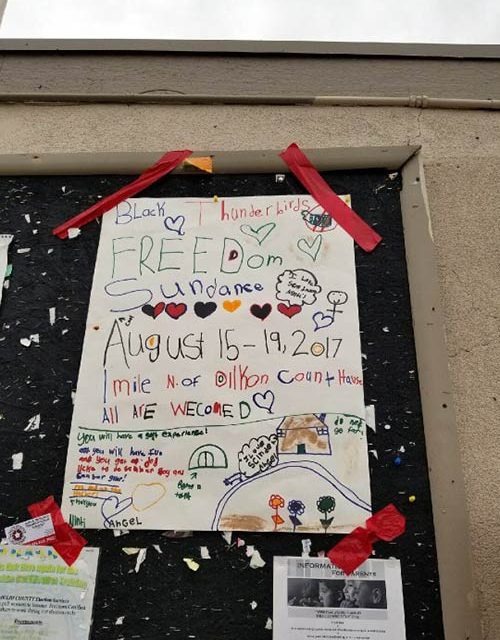 Submitted Some Dilkon residents are worried that the sundance advertised in this poster may have ties to an extreme Black separatist cult whose leader is in prison for child molestation.

Dilkon Chapter on Tuesday passed a resolution asking the Navajo Nation president and Department of Justice to exclude Dante and Rivke Pittman, aka ’Aiy and Qmamti Bnu, from the reservation based on their alleged ties to an extremist cult.

’Aiy and Bnu say they are not affiliated with the Nuwaubian Nation of Moors, as the resolution alleges, although two fundraising websites for a sundance they are hosting in Dilkon referred to Dr. Malachi Z. York, an alias for Dwight York, the imprisoned leader of the Black separatist sect.

“The chapter resolution is fictitious and has no merit for illegal exclusion of my family,” Bnu wrote in a Facebook message to the Times.

The sundance, which started Wednesday, was continuing one mile north of the Dilkon District Court Friday.

The resolution states the Pittmans do not have permission from the grazing permit holders to use the land for a sundance, but the Pittmans say the land was a fenced cornfield when they leveled it for use as a sundance grounds and not grazing land.

It further states Dante Pittman, a non-Navajo, has been “disruptive, aggressive, threatening, harassing, disrespectful and generally unacceptable to Dilkon Chapter grazing official, neighbors and relatives” and “has offended the citizens of the Dilkon Chapter to the extent that Mr. Dante Pittman is no longer welcome in the community.”

The resolution passed 58-0-3 at an emergency chapter meeting called Tuesday after some residents became concerned about posters advertising the sundance that seemed to be geared toward children, in colorful hand-drawn text with pictures of hearts and flowers.

York is currently in federal prison in Colorado after pleading guilty in 2003 to 77 counts of child sexual abuse.