Lezmond Mitchell, the only Native American on death row, was executed yesterday afternoon. 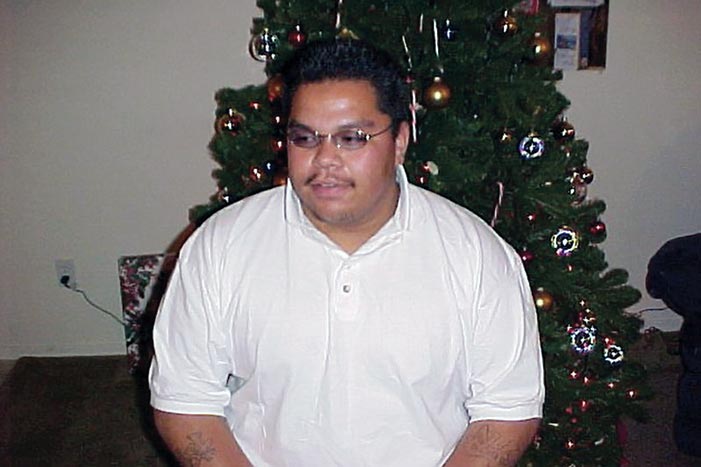 Courtesy photo | Auska Mitchell via AP
This undated family photo, provided by Auska Mitchell, shows Lezmond Mitchell, who is scheduled to be executed on Wednesday for the 2001 killing of a grandmother and her granddaughter.

He was convicted in 2003 for the brutal murders of Alyce Slim, 63, and her nine-year-old granddaughter, Tiffany Lee.

Under the Federal Death Penalty Act, Mitchell was found guilty by a jury and sentenced to death for carjacking resulting in death.

Father of 9-year-old: ‘I have waited 19 years to get justice for my daughter’

Tiffany’s father, Daniel Lee, on Tuesday said through Attorney Krista Wood, with the Arizona Voice for Crime Victims, he would be attending the execution.

“His attendance comes nearly 19 years of waiting for justice for the horrific murder of his daughter,” Wood said.

On Friday, Wood issued a statement for the family that said surviving family members supported the execution of Mitchell, stating, “Mitchell’s attorneys or advocates and the Navajo Nation” did not speak for the victims.

Delegate Carl R. Slater said on Tuesday the Navajo Nation needed to “rearm” itself to protect its sovereignty.

“Whether that rearming is with firearms or the protections of new federal laws and treaties, we need to establish the appropriate respect of the federal and state governments to the Navajo Nation, including their ongoing commitments to our people,” he said.

“The Nation stood up for its sovereignty and its people,” he said. “We demonstrated that we will not cower and debase the sovereign rights endowed to us by our ancestors and the Diyin Dine’e.”

“We may hear about the case in the papers, but it is the family that suffers alone in picking up the pieces of their shattered lives,” she said. “The criminal justice system does not end the pain and suffering so many face alone. Restorative justice must be survivor-centered and we can no longer outcast the families to fend for themselves.”

Slater introduced legislation opposing Mitchell’s execution. Slater said the federal government is overstepping its authority and ignoring the sovereignty of the tribe, which traditionally opposes the death penalty.

“The United States made a commitment to the Navajo Nation in the Federal Death Penalty Act of 1994,” Slater was quoted in an Aug. 13 Navajo Nation Council press release. “If this execution goes forward, the precedent will be set that, no matter the sovereign position of any Indian tribe, the federal government can kill American Indians and Diné, specifically.

“While this is a justice issue, this precedent will only add another chink in the nation’s sovereign armor,” he said.

President Jonathan Nez had sent a letter to President Donald Trump on July 31 asking him to commute Mitchell’s sentence to life in prison.

On Aug. 19, the National Congress of American Indians and more than 230 Native Americans sent letters to Trump asking he commute Mitchell’s death sentence.

Trump, on Tuesday night at the Republican National Convention, pardoned three-time convict Jon Ponder, saying in a video released by the White House on Tuesday, “Two years ago, I was honored to tell Jon Ponder’s story of transformation in the Rose Garden on the National Day of Prayer. Jon’s life is a beautiful testament to the power of redemption.”

Since taking office, according to the U.S. Department of Justice, Trump granted clemency to 25 people, including former Maricopa County Sheriff Joe Arpaio, who was convicted in 2017 for criminal contempt. Arpaio was sheriff from 1992 to 2016.