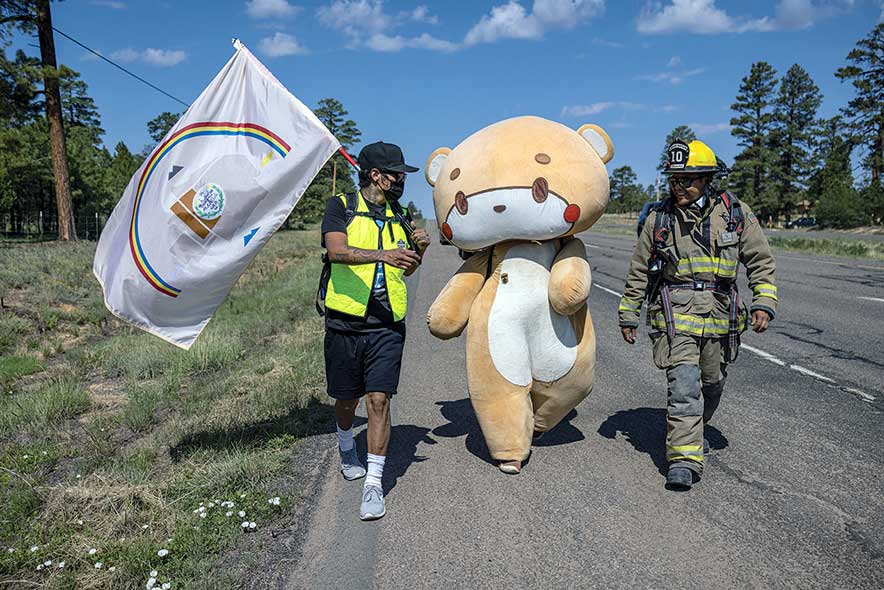 Jeremy Curley wore his Navajo Fire Department uniform as he walked side by side with Bearsun on Friday.

Curley and Larios met a crowd in Window Rock that had been anticipating Larios’s arrival, which included mascots “Ashkii Happy,” NTUA’s “Kee Kilowatt,” “Willie Water” and “Frieda Flame,” and the Navajo Department of Transportation’s “Buckle Bear,” among others.

“I first heard of Bearsun from my 9-year-old son, Chasen,” said Curley, who Is known for running marathons while wearing his firefighter gear to raise money for St. Jude’s Hospital and other causes.

“Each day when I would come home from work,” Curley said, “he would show me the videos and locations.”

As Curley’s son monitored Larios’ whereabouts, he would ask his dad to take him to meet him. But with all the lightning fires that Curley had to extinguish with the rest of the fire department, he didn’t have much time.

As Larios neared Window Rock, Curley said he did not want to get his son’s hopes up that he would take him to meet Bearsun because he’d be working.

But luckily his boss told him it be great if Curley walked with Larios.

“Close to 9.8 miles, the crew dropped me off and Larios was stoked for me to be tagging along,” Curley said.

As they neared the Window Rock fairgrounds, his son met Bearsun.

When Larios walked onto Navajo, he was an instant hit.

He is walking to raise awareness and to get donations for mental health, autism, cancer, the disabled community and the environment.

But on Navajo, his walk brought excitement and support from people like Curley all the way to President Jonathan Nez, who met, talked and walked with Bearsun.

“I know it’s a lot of different issues put together as one,” Brandser said. “But these are issues we are all concerned about.”

“There are so much more challenges, meaning drugs and alcohol and violence,” Brandser said. “Things that have existed in some forms in the past, but nowadays is very much available in rural communities.

“So it makes it very hard,” he said, “I think, even for our generation before us, to see all that occurring. We know it’s not part of who we are.”

As Larios walked onto the stage in Window Rock, after first lady Phefelia Nez and Chief Justice JoAnn Jayne addressed the crowd that had gathered for his arrival, he said the whole event was something “that was not expected” and was not prepared to give a speech.

He gave his thanks to Curley, and a family from Cornfields, Arizona, who walked with him and helped him along the way.

“I want to thank all of them,” Larios said, “They went out of their way. They didn’t have to. They literally just met me on the highway and said, ‘Let’s follow this bear.’”

While Larios is trying to raise awareness of the five causes, he’s also raising money on five separate GoFundMe campaigns where people can donate to the causes.

He said when it comes to mental health, it is important, especially after what people have had to endure in the course of this ongoing global pandemic.

“I just want to tell them we haven’t forgotten,” Larios said. “There was always a battle even before COVID. There was already work to be done before COVID. We still have to continue. Help each other out.”

Janice Taliman is a member of the family from Cornfields that followed and helped Larios.

She said she joined Larios between Greasewood and Sunrise, and then talked to the Cornfields Chapter coordinator to find Larios a place to stay.

Taliman stuck with him through Burnside, Ganado and then Window Rock.

When Larios made it to New Mexico, that’s when Taliman and her family left Larios to travel on without them.

“With him it was amazing,” Taliman said about walking and spending time with Larios. “He’s a young guy, so the connection I have with him is I treated him more like a son.”

When asked what his family thinks, Larios said his mother calls him to make sure he’s alive and well.

He said when he came onto Navajo, he received some warnings from people about the Navajo Nation and what to watch out for, such as the stray dogs and skinwalkers.

“I always go in with an open mind whenever I walk into any place because I like to find out for myself,” Larios said. “If you really want to know something, go experience it.”

Larios had never been to the Navajo Nation before he walked in a pair of moccasins given to him.

He said everyone was nice to him, and he can see how Navajos try to preserve their land.

“I’ll be honest, I didn’t know anything,” Larios said about Navajo. “I don’t think people where I come from take the time to acknowledge a whole culture.”

Larios will continue walking in New Mexico and is keeping his followers informed on social media.

“I know Bearsun is going to have a lot of helpers along his journey,” Curley said. “He will meet so many good-hearted people.”