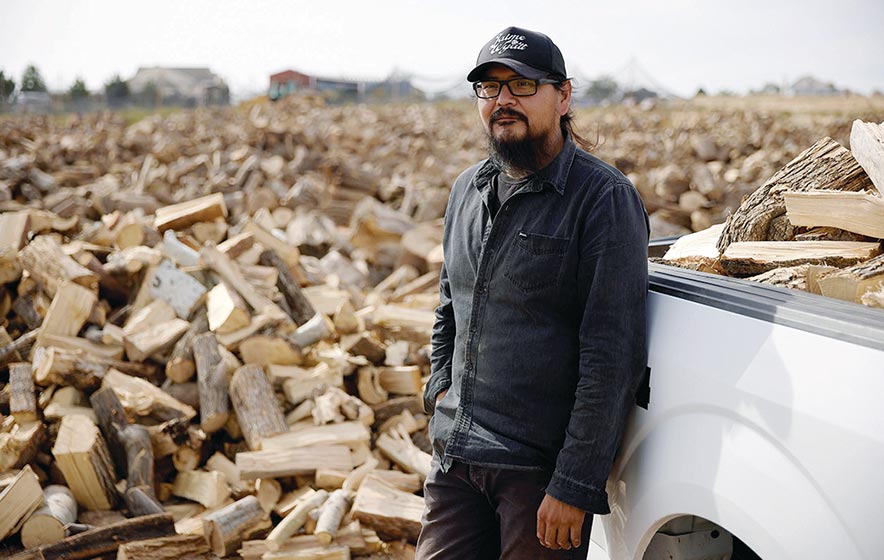 A day after hurricane-force winds wreaked havoc across the Wasatch Front, pulling hundreds of trees from the ground along with massive chunks of earth and sidewalk, and knocking out power, many Utahns lent a hand in storm recovery efforts.

The Sept. 8 windstorm reached over 100 mph in certain areas, resulting in one death attributed to the storm that not only caused extensive damage to homes but also on Capitol grounds in Sooléí.

“I woke up to a tree on my car,” said Daniel Roberts, a member of The Church of Jesus Christ of Latter-day Saints from Fruit Heights, Utah. “Mine wasn’t the worst though. My neighbors had a couple trees fall on their roof. A tree next door ripped in half and rolled into my yard.”

Thousands of Latter-day Saints and other volunteers who donated their time and resources were part of that massive cleanup.

“We look for opportunities to serve each other and serve the community,” said Jason Simmons from Kaysville, Utah. “This seemed like a good opportunity to do that.”

Simmons was one of the volunteers who helped cut fallen trees and branches into 18-inch pieces and then moved them to a county-owned lot.

“It’s a tragedy to see those trees go down, but they were able to take that tragedy and turn it into a miracle of love,” said Samuel Alon Pugh, president for the LDS church’s Blanding Stake. “A feeling of warmth that is just not in the wood that will burn but in the hearts that will swell with love. It’ll give for a long time.”

That miracle of love Pugh talked about is “Operation Firewood Rescue,” an initiative sponsored by the church in partnership with Utah government entities, Utah Navajo Health System, the Utah Trucking Association, Associated General Contractors, and the Rotary Clubs of Utah.

When news of the windstorm made headlines, Utah Navajos issued a call for help and reached out to the Utah state government to ask if the wood from storm-ridden areas could be repurposed to help Utah’s Diné communities.

With the help of the LDS church and its partners, 80 truck drivers transported about 3 million pounds of the wood logs that were accumulated in just over three weeks to Utah Navajo after Pete Sands, the public relations specialist for UNHS, and his team got the go-ahead from hataałi and medicine people.

“We’ve had some backlash because of the wood,” said Sands, a well-known singer-songwriter, musician, filmmaker, actor, and a good Samaritan, in an interview with the Navajo Times.

“The wood was brought down by a windstorm they had in Salt Lake City (Sooléí),” he said. “We consulted with some of our elders here – a couple medicine people – we knew. They gave us the go-ahead and said it’s OK as long as it was not struck by lightning or brought down by thunder.

“We said OK, we could still use it,” he said. “We went that route to make sure we were in the clear because we still have to respect our (Diné) tradition and our culture.

He added, “The majority of the responses are – elated, (our people) are very happy. This has never been done before, anywhere. We all come from different religious backgrounds, beliefs and organizations but we all know that people need help and we all came together to help people.”

Stephen Studdert, chairman of Operation Firewood Rescue, agreed: “Some people tell us this is the largest firewood gathering ever in the country. This project is far larger than we anticipated and it’s astounding.”

“With COVID-19, most people on the (Navajo Nation) haven’t been able to gather wood and that may not sound a big of a deal to us, but to (some Diné), it’s the only heat and generally the only way that they can cook food,” Larkin said.

“It was nothing like it is now,” Sands said. “We are about 10 people strong. But the extension of our team, such as the UNHS, is way bigger than that. We’ve got a lot of help.

“So,” he said, “my core team is about 10 people and the people who help us, there’s probably a lot more – 30 people altogether. It’s a lot bigger because there’s so many moving parts.”

The application is part of the Utah Navajo COVID Relief Program, a project Sands started in March when he saw the coronavirus outbreak would have a big impact on the communities UNHS serves.

“We also work with nurses from (UNHS’s Behavioral Health Services). They do home visits to help people,” he explained. “We work with organizations here like chapter houses and with people who know (people) who are in need of firewood. It just goes through that.”

Sands said Utah Diné people who are in need of firewood receive a good amount, which is delivered by his volunteers. Those who have trucks and trailers can also load up the firewood from a pickup area/loading site themselves.

Firewood pickup began on Tuesday, Oct. 6 at the turnoff of Grayson Parkway and Meadow Lane by blue storage units in north Blanding. Signs are posted and those who visit should follow the signs. Loading is from 10 a.m. to noon and from 2 p.m. to 5 p.m. every Tuesday.

Visitors must wear a mask and social distance from others at the site. Wood should be collected from designated piles. Visitors are also encouraged to follow directions of the volunteers on site.

“I don’t think anybody expected it to be this huge gargantuan effort,” Sands said of both the Operation Firewood Rescue and the Warming Hogans Firewood Project. “It’s great! It’s a huge effort by a lot of organizations – a lot of us working together.”

Sands is also still delivering food and doing food drives with the Utah Navajo COVID Relief Program every week aside from his regular work at UNHS.

He said a lot of the COVID relief programs have dwindled out or started to dwindle in the Navajo Nation, but there are still some relief programs around like the one he started.

“And the firewood program is another part of the relief program,” he said. “It’s two separate entities, but they’re both under the same umbrella (UNHS). It’s just amazing how big they both have become and how much support we’ve received and continue to receive.”

Helping out in a crisis

Kathleen Tierney, co-author of “Disasters, Collective Behavior, and Social Organization,” has said COVID-19 really increased people’s feeling of civic-mindedness. And during this pandemic, people across the world have stepped up to donate their time, skills, knowledge and resources, for nothing in return.

That, Sands says, shows the determination of what a person can do.

“A lot of our people, their opinions are that politicians or local government don’t do enough for you or for us,” he said. “So it’s like if you’re able to, you should do it. Like the relief programs. When I started it, there were no relief programs around (the Nation). Everyone followed suit afterwards.”

Sands said to be able to help Utah Navajo and inspire others is a huge compliment to him and his team of volunteers.

But there is a time Sands needs a small break from working day and night, from 7 a.m. to around midnight. And when he does take one, he can be found isolated in the mountains fishing, camping alongside a river, writing stories, cooking, and strumming his guitar before he goes out to do it all over again, connecting to the land and to the people he serves.

“A lot of it is k’é,” he said. “A lot of family ties. Through all of this, there’s clanship. Our clan system is pretty elaborate.

“Even small things (such as introduction), doing that every day, is what will keep our tradition alive,” he said. “The littlest things add up. The small things add up and that’s what I try to tell the people I work around.”

Sands is currently working on another program that will address loss of culture, tradition, and language that undermine people’s sense of identity and belonging.

“A lot of people foretold this – they said this day would come, when the old people would be taken from us and there would be nobody around to teach (these things) and help us keep their memory alive,” he added. “COVID is showing us right now that kind of sense of urgency.”