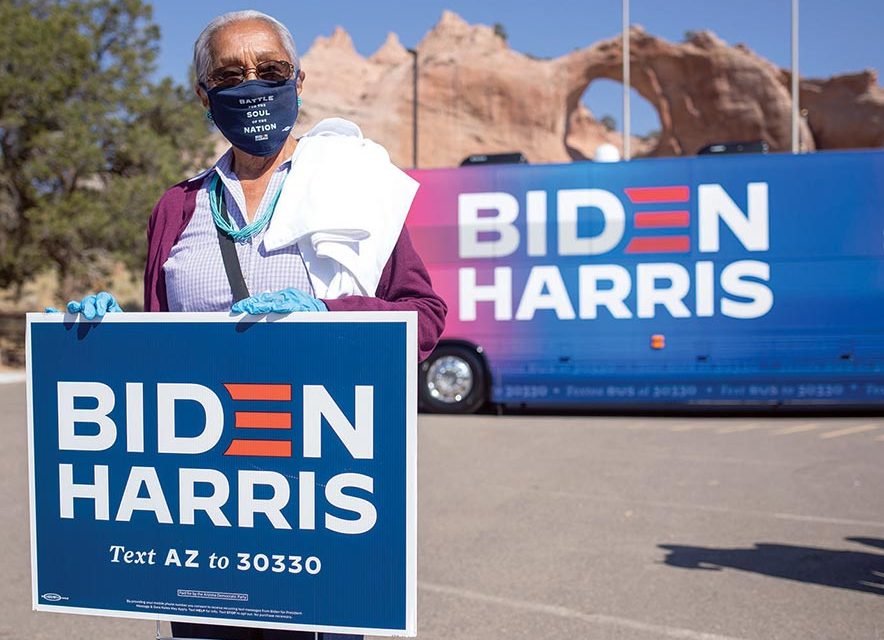 A supporter of the Biden/Harris ticket, Nez will be meeting with the two candidates, along with five other Native leaders, to give them his priorities. “Here is an opportunity for the Navajo Nation president to meet the presidential candidate and let them know our priorities,” said Nez. “Not just when they get into office, but they have considerable influence right now until the election.”

The Navajo Nation Washington Office is currently drafting a list of priorities that will be given to Biden and Harris. Nez listed water rights settlements and infrastructural needs as a few of the priorities he plans to talk to them about.

On Wednesday, the Biden-Harris bus came through Window Rock, and this was the only reservation it had stopped at as it continued to Phoenix. This bus tour coincided with the first week of early voting in Arizona, one of the top swing states this year.

“We thought it was important to show the commitment we have to engage tribal communities,” said Clara Pratt, Diné, tribal engagement director for the Biden-Harris campaign. “I’ve never been a part of a campaign where there are multiple tribal people in different positions. I’ve never seen something like that where you have such a commitment to tribal communities.”

The bus tour made sure to uphold CDC COVID-19 guidelines with people socially distancing and wearing masks. The same mandates were imposed by the Nez administration in April. These mandates are also what Biden and Harris plan to implement across the nation should they be elected, and Nez is completely for it.

“Their platform is making sure people are mandated to wear masks throughout the country,” said Nez. “Navajo has done that already. We got a spike. We managed to bring it back a little bit, that’s because of listening to the public health experts. “I always said how I wish more leaders would follow the public health professionals’ guidelines,” he said. “It’s strict but we manage to keep the numbers relatively low.”

Nez admitted the tour violated his stay-at-home order and order against visitors travelling from outside the Navajo Nation, but Nez said he made an exception to invite the candidates. It’s unprecedented for a presidential and vice presidential candidate to meet at the same time with tribal leaders well before elections, according to Nez.

Nez said the meeting does not mean the Navajo Nation is favoring one candidate over the other, although he personally supports Biden. “You have an incidence where you have the vice president (Myron Lizer) representing the Navajo people by meeting the president (Donald Trump),” said Nez, referring to a Trump event Lizer had attended. Pratt said it’s important for people to look at the policy points that have been posted on joebiden.com/tribal.

She said Biden and Harris have been “adamant” in including tribal voices and policy, and these types of statements are unique during a campaign. “When they are talking about the Build Back Better economy, the racial equity plan, there’s parts that speak to Indian Country specifically in those plans,” explained Pratt. “It includes making sure tribal communities are at the table when we are talking about building economy, investing in infrastructure. “(Harris) has already called for mandatory funding of Indian Health Service that’s not at the whim of continuing resolution,” she said.

U.S. District Court Judge Steven Logan issued a ruling that extends the state of Arizona’s voter registration deadline until 5 p.m. on Friday, Oct. 23. You can register to vote online at https://azsos.gov or by mail or in person. The ruling is the result of a lawsuit filed by several voter advocacy groups that challenged the original Oct. 5 deadline for the state of Arizona. For the state of New Mexico, Tuesday, Oct. 6 was the last day to register to vote online at https://www.sos.state.nm.us or by mail.