Eastern Agency community members say they are still living with the fallout from uranium mining on Navajo.

At last Friday’s public hearing on a tribal position statement regarding uranium, they shared stories of contamination from abandoned uranium mines that they say has caused sickness, death, dislocation and trauma for decades.

Teracita Keyanna said uranium mining robbed her family of their health, peace of mind and way of life. “Everybody has a right to live in their homeland without worrying about drinking the water, growing crops, and raising livestock, without fear of radioactive contamination,” she said. 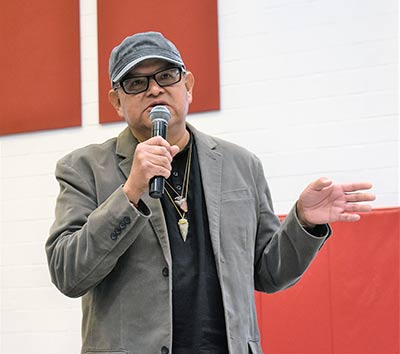 Like many in her generation, Keyanna, who grew up in the Red Water Pond Road community between two uranium mines, played and herded sheep in the mining areas.

“These are all things that the uranium industry, the U.S. government and even the Navajo Nation has allowed our people and it’s not fair,” she said. “We shouldn’t be considered expendable. We’re supposed to be wards of the land. It’s been a devastation on our lives.” Keyanna said there were no fences and no warnings about the dangers of uranium when she was a child. “These health effects have not just impacted the people who worked in the mines, but those who lived near them,” she said. “It’s passing on to my generation and the next.”

Today, Keyanna has reproductive health issues and has suffered four miscarriages. One of her children was born with a hole in his heart. “Now I lose children and it’s devastating,” said Keyanna.

Keyanna said she also watched her grandmother, who worked as a janitor at the Kerr-McGee mine, suffocate to death from pulmonary fibrosis. Because of all of the contamination deemed unsafe by the U.S. EPA, Keyanna finally accepted relocation to Gallup, but she remains heartbroken over the separation from the land she grew up on.

“We’re tied to our lands,” said Keyanna. “It hurts every day. I miss home.”

Church Rock uranium miner Tony Hood shared he recently lost his wife to illness he believes was due to the contaminated state of his ancestral lands. “All of our relatives have been exposed to the danger that we weren’t informed of,” he said. “We lived right next to the mine.”

Hood said when uranium companies came in the 1960s, community members were never asked to provide prior informed consent. “That is environmental racism,” he said. “I can vividly remember the pristine wilderness. Now all of that is gone.” Every person who testified at the Crownpoint hearing said that they cannot understand why no progress has been made with the clean-up of the mines.

At the hearing before the Nabik’íyáti’ Committee, the second of several scheduled around the Nation, Speaker Seth Damon explained that the purpose of the regional hearings is twofold: to create a uranium position statement for the Navajo Nation and to work with the U.S. Environmental Protection Agency on a plan for the next 10 years.

Today, a total of 523 Navajo Nation abandoned uranium mines that can each have multiple waste areas such as mill sites, open pits or tailings, have yet to be cleaned up.

This came as a shock to Damon at a recent Council tribal consultation with U.S. Environmental Protection Agency. “My big question is, Why is the EPA taking so long?” said Damon. “From 2007 to 2020 and there’s still nothing done. There’s no cleanup! That was the biggest eye-opener.”

Damon indicated that while various mine assessments, evaluations and preparations have been done by the U.S. EPA, not one mine has gotten to the actual cleanup stage. This is despite the fact that $1.7 billion in federal funding was allocated for cleanup of 219 of the 523 mines, he said.

“The biggest thing is that out of the $1.7 billion dollars I think the total amount that has been spent as of today is $116 million on studies,” said Damon. “Out of the 219 that were funded, not one site is one hundred percent ready to be cleaned up.”

Another part of the problem is that the nine-step Navajo Nation Superfund Program process, which guides cleanup efforts, is mired in crippling bureaucracy. “Removal Action,” or cleanup, is the last step in the process and none of that has happened yet. The U.S. EPA reports that the goals for the next 10 years include completing detailed assessments, engineering evaluations, cost analyses, clean-up plans, and initiating cleanup at all 219 sites by 2024.

Funding to assess and remediate the other 304-plus sites has yet to be secured. Damon added that while the Navajo Nation EPA has been trying to work with U.S. EPA for the past 12 years, communication with the Nation has been unsatisfactory and is one of the reasons the Council is now stepping in.

“These outsiders came in and contaminated the land,” said miner and cancer survivor Edith Hood from Red Water Pond Road. “It’s environmental injustice where we are. We have every right to live in a clean community but that is not happening.”

Everything has been contaminated, from water to air and soil, she said. Hood and others at the hearing stated that despite the hardship they face, they continue to speak up for those who can’t. “For the elders who have gone, and the young children,” said a tearful Hood. “This is why we do it.”

She said when the exploratory drilling came to the region in the 1960s that was the beginning of the end for her community.

The prospectors had no respect for the people or the livestock, she said. When they started drilling a “blue muck” came out from the ground and many animals and some people fell into the pits, she said.

Hood said it wasn’t until the 1980s that the Clean Water Act finally came to the reservation. “Where is the BIA and IHS?” she asked. “You people have put the people’s health at risk without consultation.”

They still haven’t even dealt with the 1979 Church Rock mine spill, she added, which released over a thousand tons of radioactive mill waste into the Rio Puerco. “They should be held accountable for letting them loose on us and never checking to see what happened to the people and the environment,” said Hood.

Delegates to step up

Delegate Charlaine Tso, who lives two miles from an abandoned uranium mine, says every time she goes to Washington, D.C., she asks congressional representatives what their plan is for uranium cleanup.

She’s still waiting for even one politician or candidate to make it a priority on their Native American policy agenda, she said. “Where is the justice?” she asked.

“That is something we really need to fight for. We have every right to make that demand.” Delegate Mark Freeland, who is willing to “take on the fight” for cleanup, said the USEPA has a trust responsibility to fulfill. “Enough is enough,” said Delegate Edmund Yazzie. “We need to step up.”

Yazzie proposed that the Council and president’s office need to address the issues jointly and also educate Congress and even the president of the United States. “We have to start working together,” he said. Former Delegate Jonathan Perry reminded leaders that Diné traditional, customary and natural laws have been and continue to be overlooked.

“We’re hearing issues (and) impacts about the health of the people, the land, livestock, air, and water,” said Perry. “As long as we continue to ignore Diné Fundamental Law, we’re not going to be able to fully stand as a sovereign tribe.”

“People are dying as we speak,” said Anna Rondon, who has followed uranium health impacts for decades. “The people are sick and tired of being sick and tired.” Rondon said, regardless, the people need to unite and make their voices heard.

“Until our leaders feel strongly about implementing the treaty and are confident they know their rights as indigenous people, it’s going to be up to the people to fight the fight,” she said. Rondon recommended delegates allocate Sihasin Fund money to help all Navajo people impacted by uranium to form a regional coalition.

“All that money sitting in these banks belongs to our people,” she said. “It doesn’t belong to oversight committees.” She said health studies are needed at every chapter as well as death certificates of the people who’ve died from cancer.

“Can you imagine how many thousands of death certificates?” she said. “We have to thank the uranium companies for that, and the federal government.” She also suggested a large lawsuit should be considered. “I recommend the people of all these communities file a lawsuit against the Department of Energy and the Department of Defense,” she said.

Maryann Sam, a cancer survivor and an obstetrics nurse said she is at a loss as to why the cleanup hasn’t happened. “It seems that nobody gives a damn!” she said. “We’re not even looked at as people. We’re forgotten.”

Sam said it’s urgent for everyone to take a closer look at the health issues. “We need to do something,” she said. “We can no longer say it’s not going to happen. It’s happening now!”

“The new generation that’s coming in, we need to teach them about the perils of uranium and how it affects the body,” she said.

Sam said as an OB nurse she’s seen the impacts of uranium contamination in newborns first-hand. “Where’s the protection? Where is it?” cried Sam. “Is it worth losing a life or having a baby born deformed?”

Percy Anderson said he believes the U.S. government’s plan to mine for resources on Navajo started with the 1930s livestock reduction as a strategic action.

He said, “That was the moment the U.S. government made a commitment to start exploring for uranium.” Anderson said he is still concerned about the impacts of the Church Rock mine spill.

“From Church Rock to Sanders many families have passed on due to cancer or neurological diseases that came about as a result of the contamination,” he said. “We need to do a study on the Rio Puerco,” Anderson told delegates. He suggested Navajo Nation government, Indian Health Service and other agencies come together to fund this study and others.

“Now is the moment our leaders are beginning to realize that we are no longer going to be taken advantage of,” said Anderson. “We know who we are as Navajo people. It’s built into our DNA as well as the linkage to this land.”