Researcher: Uranium cleanup should be No. 1 priority

“Illness due to uranium is no longer just the story of the miners. It’s the story of their children and grandchildren,” said Southwest Research and Information Center Environmental Health Specialist Chris Shuey.

Shuey, who studies contaminants in the environment and their potential health effects, calls the legacy of uranium mining on the Navajo Nation an atrocity.

“Hopefully, these hearings will result in new and better policy to speed up the cleanup, fund addition health studies, and get reparations and compensation for the people,” said Shuey, who presented at a hearing in Crownpoint on a proposed Navajo Nation position statement on uranium. 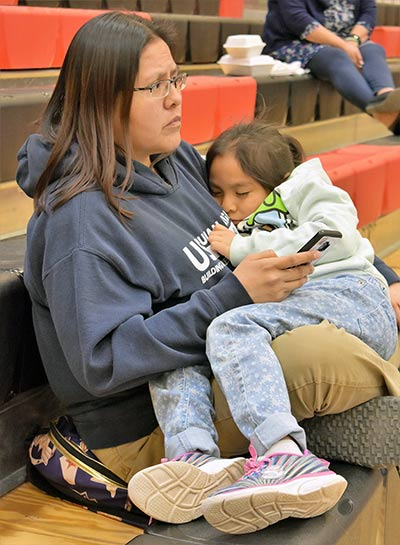 Because of the shroud of secrecy and superstition surrounding uranium as a weapon of war, health studies and continuing education about the impacts did not occur as soon as they should have, he said.

“Not knowing and not talking is equivalent to a death sentence because you can’t do anything about it,” said Shuey.

That’s why hearings like this are so important, he said.

“They give folks who have been directly affected by uranium development an avenue to talk about the impacts to their health, the land, their families, and their cultural practices,” said Shuey.

Navajo Nation residents who’ve been exposed to radioactive uranium mining sites or have lived near abandoned mines say their communities have been exposed to elevated risk of illness, including lung, liver, heart, stomach, and kidney disease and a variety of cancers and other ailments.

Exposure to uranium and other toxic metals can occur through the air, water, plants and animals and can be ingested, breathed in or absorbed through the skin.

Today, because of the lack of timely remediation and reclamation of the mines, Shuey says contaminated nano-particles resulting from decades of windblown and weathered uranium waste erosion can circulate like dust, be breathed in deeply, and lodge in the lungs.

“What we know is that the mine wastes have heavy metals in them and the small particles proliferate,” said Shuey. “Uranium and other heavy metals attach to these particles.”

In laboratory testing, he said, it was found that the tiny radioactive particles can create cardio-pulmonary toxicity in mice.

Shuey said researchers are looking into how far the tiny particles can travel and disperse.

“These small particles are released into the airshed. How far they go remains to be seen, but because of the effects on laboratory mice we’re concerned about the effects on people with long-term, chronic exposure,” he said.

Shuey says that while more uranium health studies need to happen, getting the cleanup done should be the first priority to prevent further exposure.

“We need to continue to fund expanded health studies but ultimately speeding up the process to get these sites cleaned up and isolated for as long as possible is the best way to prevent new health problems, including cancers,” said Shuey.

While Shuey acknowledges that cleanup is very difficult given the magnitude of the sites, he estimates that at the pace EPA is going now, it could take 100 years to complete the cleanup.

“That’s not acceptable, regardless of the limitations of the law,” he said. “Federal law guides these cleanups, but it might be possible for the Navajo Nation to look for ways under its own laws to speed up this process so that you’re not investing all of these millions and millions of dollars in bureaucracies.”

Shuey said it’s really important to get to the point, as soon as possible, where they are actually consolidating the toxic materials and burying them, either in some sort of regional depository or isolated on site.

Studies that Shuey has worked on in collaboration the National Institutes of Health and University of New Mexico’s Community Environmental Health Program with principal investigator Johnnye Lewis have confirmed that uranium contamination can lead to high blood pressure, kidney disease (during the active mining era), and immune system impairment.

Shuey says the studies he has been involved with have not done research on cancer, but he believes more of that needs to happen.

The bottom line, says Shuey, is that chronic exposure to contaminants can lead to chronic disease risk.

In conjunction with the Navajo Nation Department of Health and Indian Health Service, Shuey has also been a co-investigator with Lewis for the Navajo Birth Cohort Study that revealed babies of women exposed to uranium can be born with uranium in their urine, which confirms trans-placental transfer.

An additional outcome of the NBCS is that the concentrations of uranium in the babies appear to be increasing in their first year of life, said Shuey.

“We don’t know what this means for long-term health consequences,” clarified Shuey. “But we know it can’t be good because uranium has no benefit to the human biological organism.”

While some other metals can serve as nutrients in the body, uranium is entirely a toxin, he said.

Shuey added that the NBCS is largely being implemented by a Diné work force on the Navajo Nation, which has been very helpful and beneficial.

“In addition to doing these studies they are building capacity and generating expertise in the communities,” he said.