The family of Edward T. Begay, former vice chairman, speaker of the Council and delegate for Church Rock, announced that he had died Sunday in Albuquerque. 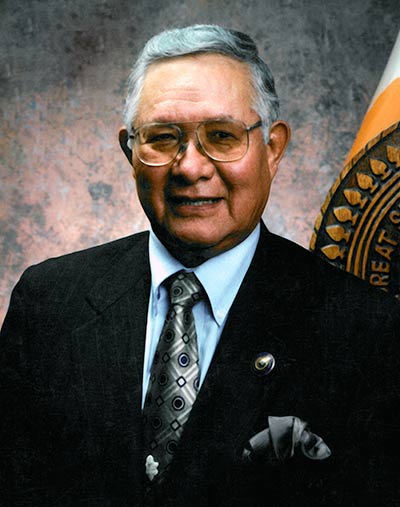 Edward T. Begay’s family said in a statement, “Ed T. was a loving husband, caring father and gracious grandfather, but to many he was Cheii.

“We will miss him at our dinner table, sitting next to us in church, and listening to his stories of the journeys his life has taken him on,” the family said. “We are extremely proud of his service to the Navajo Nation, the state of New Mexico, and his tribal home communities.”

Services are pending and the family asked for respect as they grieve but appreciate expressions of sympathy.

Gov. Michelle Lujan Grisham issued the following statement on Sunday: ” I am grateful to Mr. Begay for his life of service to both the Navajo Nation and the state of New Mexico, and my prayers are with his family and loved ones.”

The governor ordered a police escort for his body and family from Albuquerque to Gallup.

He was a true statesman who devoted his life to the Navajo people, his family said in a statement.

He grew up in the Nose Rock area of what is now called “Superman Canyon” just northeast of Gallup.

He served I the U.S. Army in 1958 and was stationed in Fort Jackson, South Carolina. He then directed the Navajo Tribe’s Data Processing Department for nearly 10 years.

In 1961, he married his high school sweetheart Cecilia M. Damon and they had two daughters, Sharlene Begay-Platero and Sandra Begay, and a son-in-law, John Platero Jr.

He served as president of Church Rock Chapter from 1968 to 1970 then was elected to the Navajo Tribal Council. From 1971 to 1983, he represented Church Rock and Breadsprings on Council.

In 1982, he successfully ran for chairman and vice chairman with Peterson Zah and they served from 1983 to 1987.

He worked closely with Zah and the Navajo Tribal Council to renegotiate mineral, coal, oil, and gas leases with major energy companies to benefit the Navajo people. He helped to create the Permanent Trust Fund, now valued at several billion dollars, that continue to provide a source of income for future generations.

In 1999, he was elected speaker of the Council and served two terms. He directed his staff to research the Diné origin of Navajo customary law, resulting in Council passage of the Fundamental Laws of Diné on Nov. 1, 2002.

Ed T. Begay also played key roles in gaming agreements with New Mexico and Arizona, legislative redistricting, the United Nations’ Declaration on the Rights of Indigenous Peoples, the Local Governing Act Trust Fund, and many others.

The family said, Ed T. Begay enjoyed reading his Bible, was fluent in Navajo and English and wore a western hat that became his trademark.

“He enjoyed visiting with family and friends and always gave a warm smile to everyone,” the family said. “He left behind a great legacy for the Navajo people.”