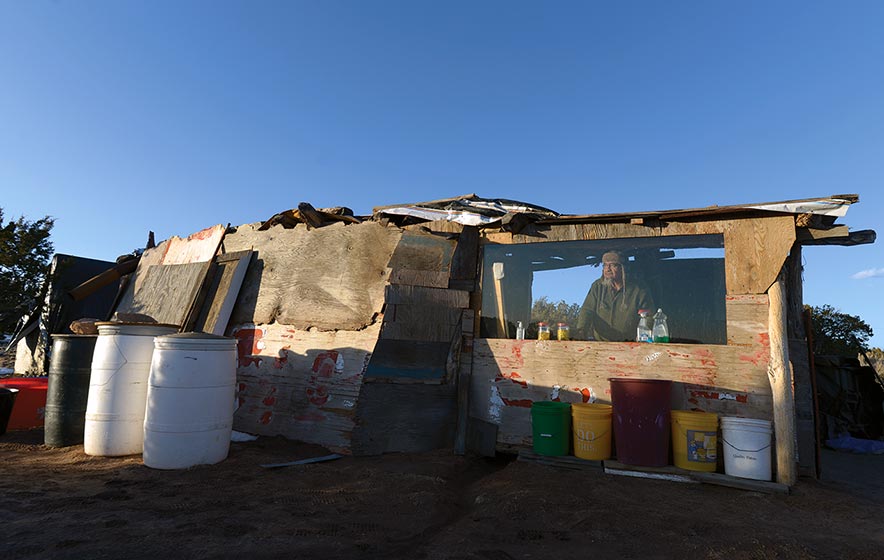 Navajo Times | Donovan Quintero
Harry Joe Ashley looks out the window of the shack he built himself out of scraps of wood south of Wide Ruins, Arizona.

Even 10 layers of blankets were not sufficient to keep him warm.

The wintery nights would sometimes force the 64-year-old Marine Corps veteran to wake up at 3 a.m., put on his jackets on top of his six shirts and four pairs of jeans, and go outside to start a fire about 50 feet from his one-bed travel trailer that was given to him by a family he sheered sheep for.

He said he’s wanted to build a small structure next to the trailer, which would house a wood stove because it would not fit in his trailer.

He just needed his hardship assistance check to come in first, he said on Saturday at his home in Gad Łeeyání, which is south of Wide Ruins.

The twice honorably discharged veteran, who built his home, which looks more like a shade house or shack, out of cedar wood, has lived here for the last five years.

He said he has asked the tribe to help him build a home for more than 10 years and counting.

“I’ve been asking and asking for building material from the (Wide Ruins) chapter house,” Ashley said. “They keep telling me to turn in paperwork.

“And that’s what I’ve been doing and taking it to them,” he said. “I have no idea what they’ve been doing with it. You got to have this paper and this and that, I’m told.”

He thought his veteran status would make the paperwork easier. After all, he served his country twice, he said, even went to college at Northern Arizona University in between his military service.

He said the Navajo Nation Veterans Administration stated it helps all Navajo veterans with assistance.

According to the NNVA’s website, the administration’s policy is to “provide every eligible Navajo Nation veteran” a chance to apply for housing assistance under the Navajo Veterans Housing Program.

As far as Ashley was concerned, the very little assistance they provided was not enough. His home is proof of that.

“I’m a veteran. I hold two honorable discharge. I got out and then I re-enlisted. I got another honorable discharge,” he said, adding he served a combined total of six years, from 1974 to 1977, and 1980 to 1983. After his enlistment, he went to school before re-enlisting.

Ashley said he is a carpenter by trade, which he did up until he lost his home to a fire. His tools and all of his important documents were also destroyed in the fire.

“My paperwork, where I used to live, burned,” he said. “So, it has made my requests to get material much harder. I lost a lot of important paperwork.”

The total loss of his possessions caused him to lose interest in carpentry, he remembered. But being the Marine he is, he dusted himself off and took interest in learning to become a medicine man. He started following a late medicine man named Tom King, who was originally from Rocky Ridge, Arizona.

“Hachxǫ́’íjį́ hataałgo, I helped him,” Ashley said. “I learned a lot from him. Then he said he is going to move back to Rocky Ridge, where he is originally from. Two months later, I heard he passed on. That’s what happened.”

Not deterred, Ashley said he started helping in other ceremonies.

“Int’eeshgóó ‘óó aká’anáshwo’,” he said. “I started helping at many ceremonies. I learned a lot. People started coming to me for help, like for Kéłeezh (ceremony). ‘Nihikán’díí’ááł,’ I was asked. People would come to asking me to do various ceremonies for them.”

The benefits of helping and performing ceremonies were that he got food and some money, which he jokingly described as, “Yiniiłt’aajį’ ajilghaałgo,” which meant he never gave up a chance to eat when food was offered.

His tenacity to survive seemed to be paying off. Then, in 2020, the COVID-19 pandemic arrived.

“And that’s what I did until last year,” he said. “There were no more ceremonies. Everything stopped. I could not make any money after that.”

So he reached out to the NNVA for help, he said, but since they changed leadership so often, it made requesting more difficult.

“They even changed secretaries too. It is difficult,” he said.

According to Hugh Smith, NNVA’s deputy director, the NNVA’s fiscal year 2020 budget was $1.5 million, which was divided among its six offices.

The NNVA works with two budgets: general funds for administration and trust funds for the chapters. The general funds pay for operations at the NNVA office and the trust fund assists Navajo veterans across the reservation.

The hardship and energy assistance pays up to $600 each per year, while the home improvement trust fund paid $700 a year.

But Ashley does not need home improvement assistance – he needs a new home.

Zwierlein also said the audit found that $1 million worth of materials purchased from Home Depot could not be accounted for.

“We could not provide documentation on where that material went, to which veteran’s home,” he said. “That information was indicating the materials were being delivered to job sites, and those materials were being pilfered, or they were not being properly protected on site. And so, they became weather damaged and unusable.”

He added a total of 44 open purchase orders were closed at several Home Depots two weeks prior to his testimony.

“Anyone who knew about these purchase orders would have been able to walk into Home Depot and charge materials and these accounts,” Zwierlein said.

No homes for veterans have been constructed since 2015, he said.

On Saturday evening, the wind howled through Ashley’s house that has no door and only one window that faces south.

He massaged his knee, explaining he had fallen when the steps were covered in snow.

“That was with the last snowfall,” the old warrior said. “In the morning while it was still dark, I slipped and fell and hit the ground and landed on my knee.”

What he longed for was a wood stove, he said. One that could keep him warm as winter temps dipped into the single digits.

“So, I sleep with a lot of blankets every night. Every morning, I go outside and build a fire,” he said.

He stood up and gingerly limped to his Plexiglas window, adjusted the bottle of Windex window cleaner alongside bottles of green chili and dish soap.

After he took a long silent gaze out into the wilds of Gad Łeeyání, holding onto his windowsill, he mentioned his knee again and how it throbbed. He smiled and sat back down.

“It’ll go away,” he said while letting out a small chuckle.