Cynthia Francis is seen on TikTok making tortillas, spam, and eggs on a grill outside — nothing out of the ordinary. But the reason for the outdoor breakfast was 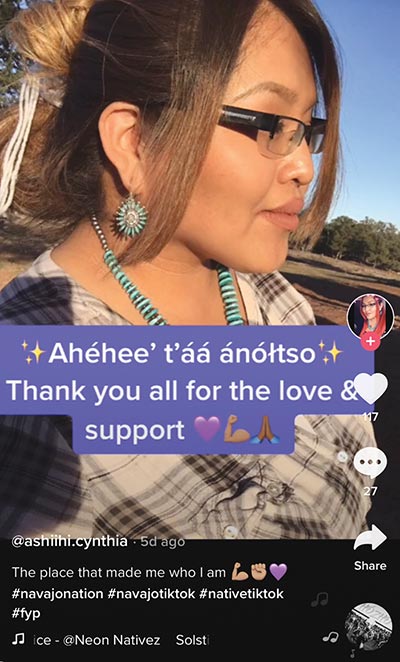 Navajo Times | Arlyssa Becenti
In a still from her TikTok account, Cynthia Francis thanks her followers for their support. Francis, of Houston, rode out the recent snowstorm in Texas by falling back on skills she learned from her grandparents.

Francis and millions of other Texans’ electricity and water was out due to the severe snowstorm and freezing temperatures last week. Texas grappled with unfamiliar winter weather that caused below freezing temperatures and snow in parts that rarely ever receive this type of weather. With these peculiar forces of nature, millions were left freezing without electricity, as well as no running water.

This also caused people to ravage the supermarket and empty its shelves. For Francis, who grew up with her grandparents in Woodsprings, Arizona, this type of winter weather was familiar and having been raised without electricity or running water, the single mother knew how to fend for herself and her three children, which she proudly displayed on TikTok.

“Masání raised a badass,” said Francis in a phone interview. “Those instincts came in because I grew up on the rez with my grandparents. “To this day there isn’t electricity there,” she said. “They were still running pipes to get water there.”

Francis, who lives in Houston, said the weather warning was sent out days before the snow and freezing temperatures actually hit.

She noticed how no one was taking it seriously, but she made sure to get more food, on top of the other food she was storing for hurricane season. She also took out the blankets. She made soups like posole and froze them, and she made sure to add an extra layer of insulation on her window.

Through all this preparation, she did not think they would lose electricity or water. “We got that arctic warning … and I was thinking this doesn’t sound good,” remembers Francis. “And I don’t have a good feeling about this. I immediately got water, stocked on some more Spam, and since I was on my last bag of Bluebird flour I bought regular flour.”

As the snow came in, Francis said it was such a sight to see after four years of living in snowless Texas. And like most Diné, she took her snow bath. She played in the snow with her kids, but all this fun came to a grinding halt when the electricity shut off.

“It actually snowed and I couldn’t believe my eyes,” said Francis. “It was so beautiful. I took a snow bath. When we came home from being outside that’s when our power shut off.” The Wall Street Journal reported more than four million had lost electricity and heat during the freezing week because power providers had cut corners when building the infrastructure. The water supply was also lost, and millions, including Francis, were ordered to boil water up until Monday.

There have been 80 deaths as a result of the storm as of Tuesday. Francis experienced the rolling blackouts conducted in order to ease pressure on strained power systems, and of course to meet the high demand for heat and electricity. No matter how prepared she was, the temperature dipping down to 12 degrees was enough for her to take her kids into the vehicle to warm up.

After a while in the vehicle, she noticed the lights were back on. “It was only on for four hours,” said Francis. “That’s when I made that (TikTok) video of me cooking outside. We were without power for two and half days. It would come on for an hour, then turn off. The water came back … but it was coming out brown.”

Francis made sure to share with her neighbors, who weren’t used to this type of weather. She said she had a lot of beans, and told her neighbors she was willing to share Navajo tacos with them, a delicacy some had never had. When the electricity would come on she would let her coworkers know, in case they needed to charge their electronics.

“I have neighbors and I know they have kids, so I made a big batch of beans,” said Francis. “Neighbors around here never had Navajo tacos, and I would be, ‘Look I know this is something you’re not used to but I’m willing to offer you hot food.’ Not everyone was prepared.” As she was getting close to running out of charcoal, she was ready to chop down trees not far from her home to use the wood for cooking.

But luckily the power had come back on, and it seemed to be steady. Since the outage, power companies have been billing customers with excessively high electric bills because of the state’s deregulated system. A majority of Texans pay a fixed rate for power, but others pay based on the spot price of electricity. When supply drops and demand rises those spot prices increase, according to CNN.

This dilemma is another issue Francis is worried about as she keeps an eye on her electricity bill. “I’ve been looking into seeing if my bill has changed,” said Francis. “Our main electricity provider was trying to charge $15 a kilowatt. I’ve been looking at my bill and I don’t see a change. That is the only worry I have right now.”

Francis said her mom and family in Arizona have been concerned about her and her children, so keeping them up to date has been a priority.

When reflecting on the series of unexpected events that unfolded last week, Francis said she is grateful for the way her grandparents raised her. “I was thanking my grandparents — they’re no longer here with me … thank you for giving me these tools,” said Francis. “I surprised a lot of people. “They said, ‘You didn’t seem like you would survive without electricity,’” she said. “I might have these nails, red hair, but don’t let it fool you … this inside me will never go away.”