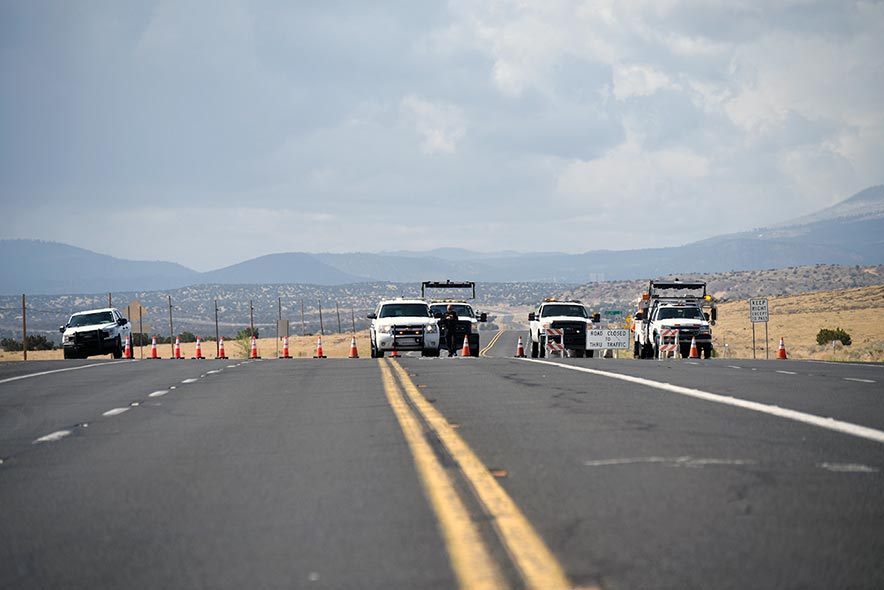 The Tunnel Fire burned 21,164 acres with 3% containment on Sunday evening. The fire has been burning for nearly a week. Firefighting crews remain in the area and continue relief efforts within the Timberline Estates and Wupatki Trails subdivisions.

Crews are constructing a line between O’Leary Peak and Black Mountain, and they may conduct burnout operations to secure the fireline – a fuel break – if needed. Crews are also working the spot fire on 89 Mesa and constructing a fireline in the Strawberry Crater Wilderness area.

Residents returning to the area are reminded that the conditions and status of evacuation levels could change based on fire behavior.

At least two dozen buildings have been destroyed, fire officials said. Arizona Gov. Doug Ducey declared a state of emergency in the county. The emergency remains in effect.

“The families were allowed back in at 9 a.m.,” said Lena Fowler, supervisor for Coconino County District 5. “They were allowed in first up to noon.

“The evacuation happened up to the summit and down,” she explained on Sunday evening. “So, it’s a short area, and U.S. Highway 89 is the main corridor. After that, at 1 p.m., was when they opened Highway 89.”

Route 89 reopened around 1 p.m. The five-day road closure caused travelers to detour through Leupp or the Grand Canyon.

Caution is advised as there will be increased traffic as firefighters continue patrolling and mopping up areas of heat, according to Coconino National Forest’s April 24 fire report.

The report reads that the landscape is dynamic immediately after a fire, and travel within the fire area can be hazardous.

Examples of hazards include weakened fire trees that may fall without warning, loss of ground vegetation that can loosen rolling debris, and rocks and ash pits from stumps that may look benign, which holds hot ash for quite a while and can cause severe burns if stepped in.

As interior islands of vegetation burn and large logs and stumps smolder, smoke will be present.