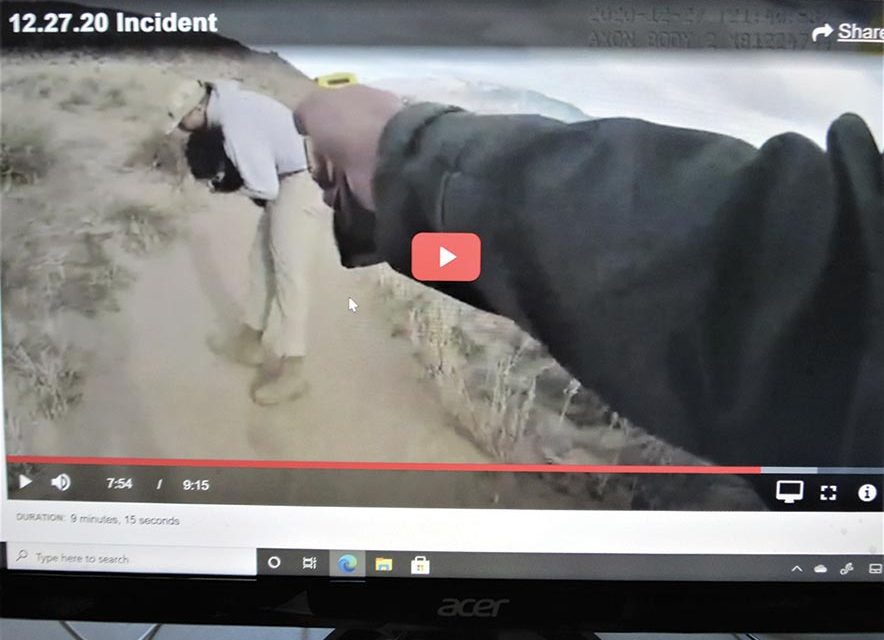 While some called the tasing of Darrell House at the Petroglyph National Monument last December excessive, brutal and racist, the National Park Service found it justified in an internal investigation.

“The investigation determined that the law enforcement ranger’s actions were consistent with agency policy and appropriate given the totality of the circumstances, including policy to preserve the significant cultural resources of the petroglyphs,” stated the March 12 press release on the incident.

“If that’s the protocol, they need to re-address their policies and procedures. Policies need to take into account human rights. There has to be some level of humanity or decency they should follow,” said Terry Sloan, Diné, city of Albuquerque inter-governmental tribal liaison.

According to the release, House (Diné/Oneida) was hiking in the park with his sister when a ranger confronted them about walking off trail on rocks containing petroglyphs. The release goes on to say the unnamed ranger provided educational information, a warning and attempted to de-escalate the incident prior to using his taser.

Based on a video of the incident, the tasing began about six minutes after the ranger told House and his sister, “This is only a warning.”

Jennifer Denetdale of the Navajo Nation Human Rights Commission asked why such excessive force was needed.

“House was completely calm. He doesn’t ever get violent or aggressive. (The ranger) went straight to tasing,” she said.

Historical references note that the national status of the park provides protection for hundreds of archeological sites and an estimated 25,000 petroglyph images carved between 1300 and 1699 mostly by ancestral Pueblo peoples and early Spanish settlers.

At the entrance of one of the many trails, visitors are greeted with the words of Pueblo elder William Weahkee – “Each of these rocks is alive, a keeper of a message left by the ancestors. They are our spirits, our guardians.”

The Petroglyph National Monument was created in 1990. Ike Eastvold, founder of Friends of the Albuquerque Petroglyphs, said that if the ancestral lands hadn’t received designated protection, the petroglyphs would have been devastated.

“At the time the monument was made, (the area) was an active trash dump. There was a buildout of homes. Contractors and residents would dump there,” he said in a Nov. 6, 2014 interview with the Times.

Situated on federal land, the National Park Service (NPS) manages the monument based on federal law and agreements with tribes. According to a city report, 29 tribes have cultural ties to the park, which include 20 pueblos, Hopi Tribe, Navajo Nation, Comanche Nation and six Apache tribes and nations.

Tip of an iceberg

Dawn Begay, Diné, the city’s tribal liaison, pointed out that the tasing incident is a red flag bringing attention to longstanding issues.

“I think this isn’t anything new. Across the country, there’s strained relationships with tribes (and the NPS). This is a reminder that this is something we need to pay attention to,” she advised.

Begay said it’s important to bring out dialogue about what happened. She recommended that the urban Native voice be heard along with those of tribal leaders.

“Our urban population has multiple tribal affiliations. It doesn’t matter what tribe you are from; you still feel connection to the earth. So, we want to create space for everybody to feel welcome, treated with respect and have the same access,” she said.

Adding their voice, the city’s Commission on American Indian and Alaska Native Affairs (CAIANA) denounced the use of a weapon against an unarmed, non-threatening visitor.

“We do not condone any type of violence or excessive force on any human being in enforcing park regulations. We oppose any complacency and actions that fail to defend all citizens of this state, including the failure to protect individuals and communities from harassment, violence, injury and emotional trauma,” the statement reads.

Responding to the Times, House said, “What happened to me was not only uncalled for; it was traumatic and an example of abuse of power that goes unchecked. It is one more example of escalated violence against Black, Indigenous, Latinx, Two-Spirit and Gender-nonconforming people that would be invisible but for social media.”

For any sustainable change, Sloan said discrimination needs to be addressed.

“It comes again to the non-Native perception of Native Americans and Indigenous peoples. That is what we face here in the city and other areas. Racial discrimination is still alive,” he remarked adding that federal park employees would benefit from cultural awareness training.

Added Nick Estes, Lower Brule Sioux, co-founder of the Red Nation, an indigenous resistance organization, “Darrell House’s brutalization at the hands of park rangers is part of a larger systemic problem of federal lands being policed not for the benefit of Indigenous people.”

Sloan said that while tribal members have rights under the Native American Religious Freedom Act, policies are in place for the purpose of protecting the petroglyphs.

“Again, as Indigenous peoples, we need to honor and respect those sites by following the rules and regulations. If you want to do something specific to our culture and religion, follow the protocol,” he advised.

CAIANA issued the same position – “While CAIANA supports the rights of Indigenous people to practice their religious freedoms without harassment, we simultaneously encourage all people to respect cultural and natural resources and abide by the orders that protect cultural and sacred sites.”

National Park Service regional director Mike Reynolds said in response to the incident, the park service is looking closer on how to improve park access for tribal members and provide cultural awareness training to park employees.

“We will be working with the Pueblo and tribal communities to develop ways to better coordinate use of the area for ceremonial and religious purposes,” Reynold’s stated in the agency’s press release.

According to the release, the agency is also arranging cultural awareness training from the All Indian Pueblo Cultural Center, pursuing future opportunities with the city’s Open Space Division and Office of Diversity and Inclusion; working to implement a plan to strengthen protection of the sensitive cultural resources through a designated trail system; and seeking to identify ways to improve incorporation of Pueblo and Tribal work crews, youth and families into park programming and projects.

“It is our hope that this incident brings awareness about the rights of Indigenous people and all New Mexico residents and healing and education to our communities including federal officials who are hired to protect our cultural resources. We encourage Indigenous communities in New Mexico to continue to engage in community dialogue and work towards identifying solutions to these challenges,” stated CAIANA.

With education, dialogue and community building, Begay said, “I have hope for the future.”

“We don’t want this to happen again,” stressed Sloan.

House received citations for being in a closed area off trail, providing false information and failing to comply with a lawful order.