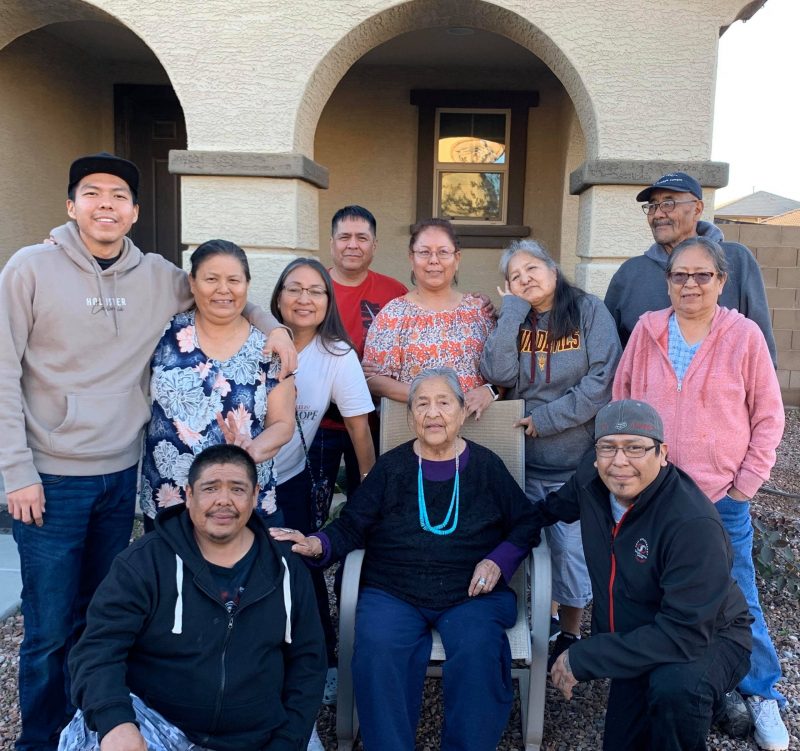 Courtesy Photo
Jean DeJolie, center, poses for a family portrait. DeJolie, a former Naatsis’áán Chapter official and a longtime educator with a master’s degree, is currently fighting for her life in the ICU at Tuba City Regional Health Care. She and her son, Douglas, attended Navajo Mountain Alliance Church the day after members attended the March 7 Chilchinbeto Church of the Nazarene Zone Rally. Douglas died on March 26.

A former Naatsis’áán Chapter official is fighting for her life at Tuba City Regional Health Care and her son passed on after attending church the day after their fellow church members returned from the Chilchinbeto Church of the Nazarene Zone Rally earlier this month that is suspected of spreading the COVID-19 virus in Western Agency.

Holly DeJolie said her mother, Jean Greymountain DeJolie, 81, is currently in the ICU at the hospital in Tónaneesdizí, where she was taken by ambulance on Thursday afternoon. Jean was quarantined with her son, Douglas DeJolie, 58, after they started seeing flulike symptoms two weeks ago. Douglas died yesterday, March 26, about 5:59 p.m.

“And they were taken from home,” Holly said in an emotional interview on Friday morning as the snow fell in northwestern Navajo. “Doctors took (COVID-19) testing (and) we’re waiting on the results.” 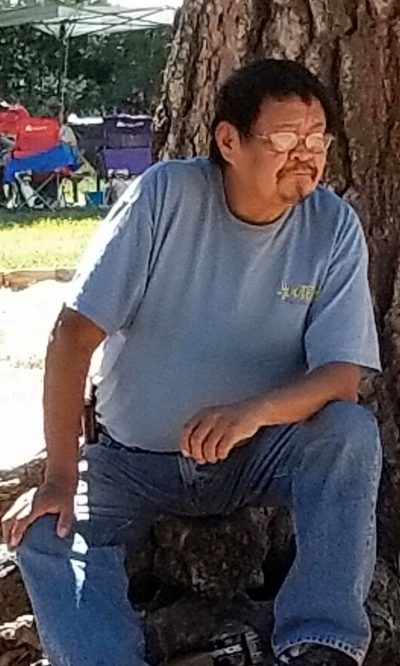 Douglas had a number of underlying medical conditions, such as diabetes, a previous open-heart surgery and a solitary kidney – single kidney instead of two kidneys – which resulted in renal failure.

“And he was on dialysis,” said Holly, who’s in self-quarantine in Tóta’, New Mexico, where she went for work. Holly resides in Chandler, Arizona. “He just went through a lot of tough times. According to the doctor, his kidney (failed).

“And my mother was also diabetic and also had a lot of health problems. They (both) took the (COVID-19) test. The (physician) said he had symptoms of (coronavirus), and he had pneumonia. So, we’re waiting on the results on that.”

Holly received a call from both her mother and Douglas about two weeks ago. They both said they were in quarantine at Jean’s homestead in Naatsis’áán.

Left devasted and worried about their mother and their brother, Holly said she and her sisters called the Navajo Police Department requesting a welfare check on them in Naatsis’áán.

“But they never did,” she said. “We kept calling and calling. They never answered their phone.

“Finally, on Wednesday (March 25), I got ahold of my brother and he said they were sick. I told him to go in and get checked. He said, ‘We’re quarantined.’ Since they were out in Navajo Mountain, a remote area, they didn’t really have all this information. Somebody could have given them (Naatsis’áán residents) a phone number from the hospital … and told them what to do. Instead, they just told them to be quarantined.”

Holly said while her mother and her brother were in quarantined, they ran out of drinking water. Holly and her sisters tried to reach out to people who could help and deliver them some water. She came across a woman named Deidra who said she would deliver them some supplies.

“Yesterday morning (March 26) was the first time we were able to get ahold of –– my niece was there,” Holly said. “They weren’t answering the phone or anything. She said my brother wasn’t responding and my mom was –– they were just lying there, and she didn’t know what to do.”

Holly said everything is hard and uncharted amid this coronavirus shutdown, which has disrupted life across Diné Bikéyah and across the globe.

“It just made it hard for us to get ahold of anybody and not knowing, this is the worst part,” Holly said as she wept. “But I am grateful to Tuba City hospital for keeping us informed and what was going on. My mom’s still there in the ICU. She’s doing good, she’s stable. It’s just ‘day to day,’ they said.”

Older adults and people of any age who have serious underlying medical conditions, such as chronic lung disease or moderate to severe asthma, serious heart conditions, severe obesity, renal failure, liver disease, among others – may be at higher risk for more serious complications from COVID-19, according to the Centers for Disease Control and Prevention.

Holly emphasizes all people must stay home and keep handwashing.

“That’s where it started from,” Holly said. “And then (Douglas) went to Inscription House Health Clinic (about 35 miles south of here) because he said his chest was hurting. They told him to just self-quarantine and to notify family that they couldn’t be (at Jean’s homestead) and they couldn’t go down there. So, they had to put up a ‘quarantine’ sign up.”

Holly said her mother and brother also ran out of food during quarantine, while she and her sisters were coordinating getting supplies to them. Because Naatsis’áán is located in multiple counties, she and her sisters also tried to contact Utah Navajo Health System in Montezuma Creek, Utah, for assistance. UNHS never responded.

“My family and I, we’re in contact (through) FaceTime since we can’t see one another,” Holly added. “People (need) to stay indoors. Take care of your elders and stay safe. This virus is really dangerous. And as far as test results and everything, we’ll probably find out in a couple of days.”