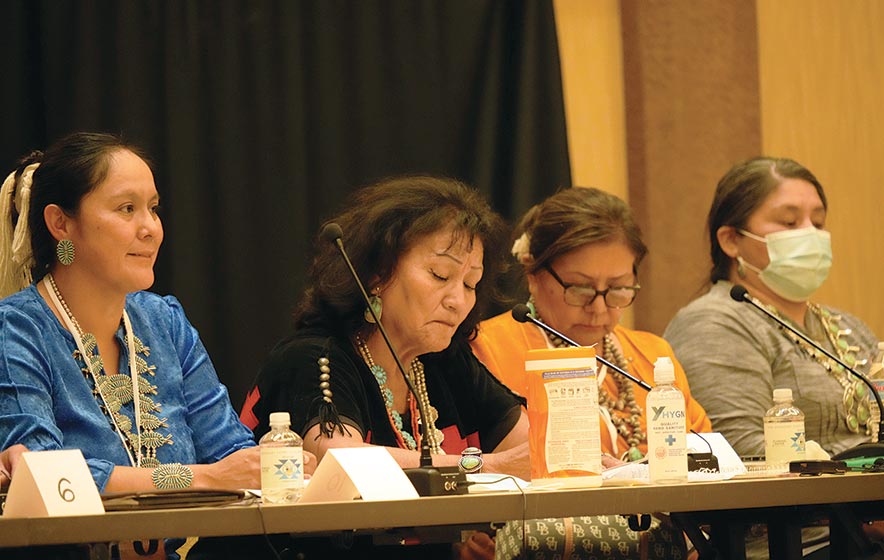 Frankie “Navajo Grandma” Davis said if she becomes president, she will mine the reservation for its natural resources because it’s the tribe’s “God-given blessing.”

Davis was responding to a question of whether candidates supported resource extraction development last Tuesday at the third candidates for president forum hosted by the Navajo Entrepreneurship Coalition at the Twin Arrows Navajo Casino Resort.

“It’s not just oil and gas,” Davis said. “You guys gotta get that out of your mind.

“We have two or three natural resources,” she said. “We have helium – I know everybody’s tired, every time you hear that word you want to throw up – but it’s found in only five places in the world. And the Navajo Nation is the only place that is where it is available now.” 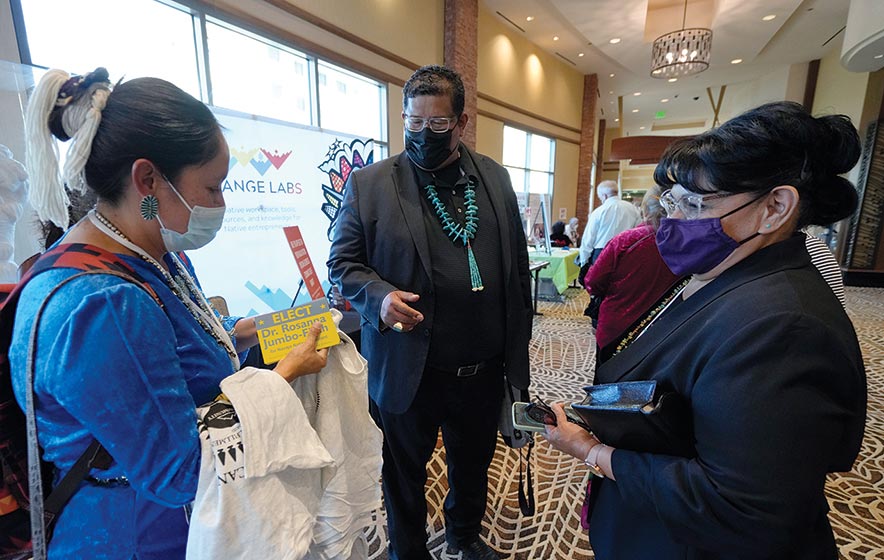 Rock, who has a doctorate in earth science and environmental sustainability, showed the Times that Qatar, Algeria, Russia, Canada and China have significant helium deposits.

The Cliffside in Texas, Hugoton in Kansas, Oklahoma and Texas, Panhandle West in Texas, Panoma (Kansas) and Riley Ridge (Wyoming) are depleting fields from which most U.S.-produced helium is extracted.

Helium production in 2020 decreased in the U.S. and worldwide in response to the COVID-19 pandemic.

Navajo Nation Oil and Gas Co. CEO James McClure, on Jan. 23, said the helium supply has been dropping since about the 1990s, but the demand for it has increased. He describes helium as an inert colorless, nonflammable gas.

McClure said the Nation has about 40 sites, including the Sanostee and Teec Nos Pos areas, that can be developed for helium extraction to help the tribe’s coffers grow.

“We feel like the revenue streams could exceed $100 million for the Navajo Nation,” he said, referring to just two of the proposed helium development sites in Sanostee.

If all 40 sites were given the green light, McClure said potential profits for the tribe would increase drastically.

“If all 40 are successful, you’re talking about a potential billion-dollar project for the Navajo Nation’s benefit – that’s the royalty share,” McClure said. “And so, our view is it’s something – and that’s making some conservative assumptions on the price of helium.

“If the price of helium continues to go up, could be even larger,” he said. “So, we think it’s definitely a worthwhile opportunity financially to consider pursuing.”

Helium is the lightest element on Earth. Once it reaches the atmosphere, it will float away into space, added McClure.

Navajo Oil & Gas reps, such as Leonard Eltsosie, have been working with Speaker Seth Damon, who sponsored a bill to extract helium using fracking methods.

Despite being tabled and many residents voicing concern against it, Damon’s helium legislation has been kicked back to the Naabik’íyáti’ Committee, where it is still sputtering.

Oil & Gas also paid for radio time at the veterans’ forum in Farmington.

She said the tribe was sitting on a “vast wealth of natural resources,” calling the Nation a “little Saudi Arabia.”

“And that is a God-given blessing. Why are we ignoring it?” Davis asked.

Davis’s campaign website (https://navajopresident.com) said she would use oil and gas extraction money to eliminate drugs and alcohol by appropriating clinics to “help addicted Navajos.”

“The Navajo Police will be enlarged to do this,” her campaign site said. 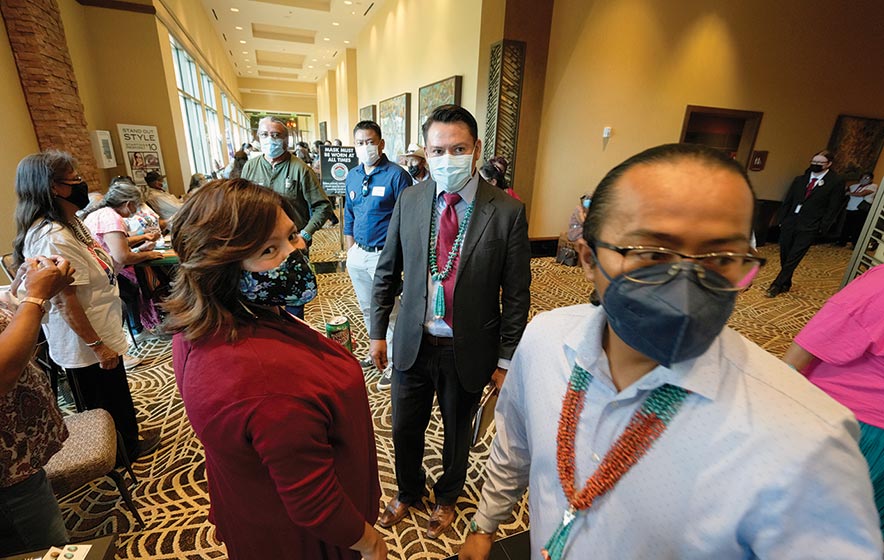 Economic troublestribe’s economic woes and challenges. Each candidate was given two minutes to discuss their vision for the economy and afterwards the candidates were alowed three minutes to introduce themselves.

Candidate Greg Bigman said if the tribe eliminated the development of natural resource extraction, it would distress the general funds.

“Right now, roughly about 40% of Navajo revenue is dependent upon fossil fuels,” Bigman said. “So, to say that you’re going to eliminate it right now, it’s going to have a huge impact on the Navajo Nation’s general fund.”

According to the controller’s office, for fiscal 2023 oil, gas and coal are projected to provide $78 million, which is 36% of the $213.8 million total of projected general fund revenue.

Bigman also spoke of the closure of the Navajo Generating Station and Kayenta Mine negatively impacting the tribe.

Bigman said the tribe needs to turn to health care to diversify the economy on the reservation.

“There’s roughly about $4 billion that is in health care, and a majority of it moves off the Navajo Nation,” Bigman said. “So, there are several things like health care that are really important.

“One is not only health care and Medicaid services,” he said. “The other is home care for our elders, mental health for our students, those suffering from depression and suicide, and all these other mental disorders.”

Leslie Tsosie, from Standing Rock, New Mexico, also said she was for the development of resource extraction.

She said communities in Eastern Agency, specifically Navajo allottees, would be impacted by the proposed 10-mile buffer zone around the Chaco Culture National Historical Park if it is approved. Approval would create a 20-year moratorium around the park.

“The people over there are really suffering,” Tsosie said. “They have nothing. They’re not getting anything out of this.

“They are really frustrated,” she said. “And they really would like this help with our Navajo Nation.”

He said the tribe is already moving away from coal and other fossil fuels. As president, he would move toward developing solar and wind energy, which could provide electricity for Navajo homes.

“And with those three basic industries, every one job that is created there, three service sector jobs will be created in terms of communities we develop,” said Dayish, who worked at NASA as a contracting officer.

“So, those are the plans that we have in place that we want to continue to move forward with working for Indian Health Service,” he said. “I’m going to bring that experience here to the Navajo Nation.”

For small businesses to flourish on the reservation, Dayish said the “procurement and regulations” needed to be “reviewed and adjusted” and made easier for entrepreneurs.

Currently, according to Change Labs, a nonprofit that helps Indigenous entrepreneurs grow their businesses, 43% of Navajo residents live below the poverty line, and $219 million in sales tax revenue is lost to border town spending.

They also attribute several factors that contribute to the “stagnate growth” of small businesses on the reservation.

“The lack of infrastructure, limited small business financing, lack of support networks and mentors, and a history of exclusion from national and global economies,” Change Labs stated, are reasons why business development on the reservation is not evolving.

“As a result,” the nonprofit said, “the Navajo and Hopi nations continue to struggle economically, despite possessing resource-rich land and a young workforce.”

Small business owner Germaine Simonson, Diné, said she hasn’t been able to provide fuel for her customers because she’s been trying to get her fuel excise tax license from the Navajo Tax Commission.

The fuel tax on the Nation is 18 cents per gallon and 25 cents a gallon for diesel. Retailers and carriers must file tax returns and pay the tax monthly.

Overall, the tax commission collected taxes from tobacco products, hotels, junk food and alcohol from fiscal 2019 and 2020 for a combined total of $220 million.

The Navajo Entrepreneurship Coalition, which is comprised of nonprofit and for-profit Navajo businesses and organizations, stated on its website that the Council is considering increasing sales tax rates from 6% to 10%. If the Council were to approve the tax hike, it would require small Navajo businesses and larger, corporate-owned companies to collect sales taxes as high as 10% from the Navajo and non-Native customers.

Simonson wondered if the Navajo Tax Commission copied sales tax ideas from bigger towns outside of the reservation.

Whatever their practices, Simonson said it was hurting her local customers who live in very remote areas and whose vehicles were not capable of traveling 30 to 35 miles to the nearest gas station.

“Last week, I was at the store, and a couple of elderly came in, and they said, ‘When are you going to get fuel? My ranch truck has just been parked because I can only go here, the short distance, to get fuel because it’s a ranch truck. I use it to haul water and to drive around the ranch to look for animals,’” Simonson said.

Simonson said she would like to sit down with Navajo leaders and discuss her experiences running a small business in rural Navajo.

“Let’s find solutions, let’s look at regulations and tax commission, and let’s really find some ways to support Navajo business because we need to find ways to start small businesses,” she said.

Candidate Buu Nygren said if he’s elected, he will make it easier for small Navajo businesses to get access to financing and business-site leases.

“(I will) remove some of the red tapes that are involved with business regulatory, and make sure that Navajo businesses come first,” he said. “They shouldn’t be a second, third or fourth priority. They should be the number one, and we should make it happen.”

Candidates for president forums were scheduled on Monday for youth in Shiprock, Tuesday at Diné College in Tsaile, Arizona, Wednesday for the Eastern Agency, and on July 24 at Teec Nos Pos, Arizona.