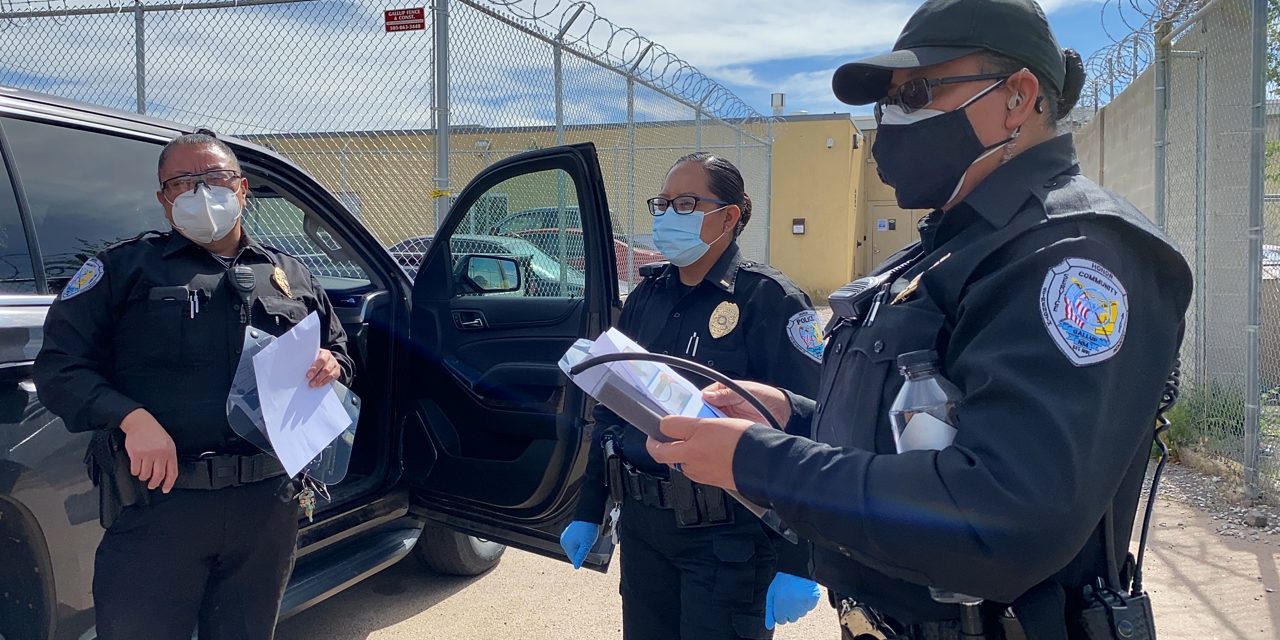 Navajo Police | Donovan Quintero
Gallup police officers wear their masks before beginning their shifts. A city ordinance that will require everyone to wear a mask within city limits takes effect on Monday.

More than a month after 170 people were exposed to the coronavirus at the Gallup Detox Center, city of Gallup will require everyone to wear a facemask beginning Monday.

“On Monday, what we want to do is try and get that information out, as far as educating the public,” Toadlena-Pablo said. “We might have travelers not familiar with our area. They might come in and think it’s OK to walk around without a mask. Definitely, we’ll educate them and give them a mask.”

A court date will be given to people who are issued the non-traffic citation.

Toadlen-Pablo said, “You will answer to a judge and answer why you were not wearing a mask under those circumstances. I do think we will not have any problems at all with people not abiding by this. I think its something that helps everyone in general.”

According to the ordinance, anyone over the age of two will be required to wear a mask or face covering while in a public place within city limits.

Businesses and food establishments that operate drive-through or curb-side services will be required to ask their customers to wear a masks or face covering.

Businesses will be required to place notices where customers can see the new ordinance.

“If they do not do so, they will be denied entry, removed from the premises, or denied service,” according to a May 13 city of Gallup news release.

The ordinance will be in effect until further notice.

The McKinley County Commission also passed a mask-wearing ordinance, but it only “aids” businesses that “choose” to participate. If a business chooses to participate then it would require customers and employees to wear a mask or a face covering on its property.

The May 5 county ordinance stated the majority of the county were within Navajo Nation boundaries, which passed its own ordinance that requires everyone to wear a facemask or face covering.

“McKinley County has a significant amount of citizens living in its land area that are living within the police power jurisdiction of the Navajo Nation, and it will be beneficial for all citizens of the county to be under similar requirements to aid in preventing and slowing the community spread of COVID-19,” the county ordinance states.

The commission, on April 13, and the city, on April 15, did not approve facemask ordinances or a curfew similar to the Navajo Nation’s, from 8 p.m. to 5 a.m.

The county and city instead voted for restrictions on the sale of alcoholic beverages. A week later, the county revoked its ordinance.

“I think it’s evident that this council is taking this very seriously,” Mayor Louis Bonaguidi said. “We have to got to get the numbers down.”