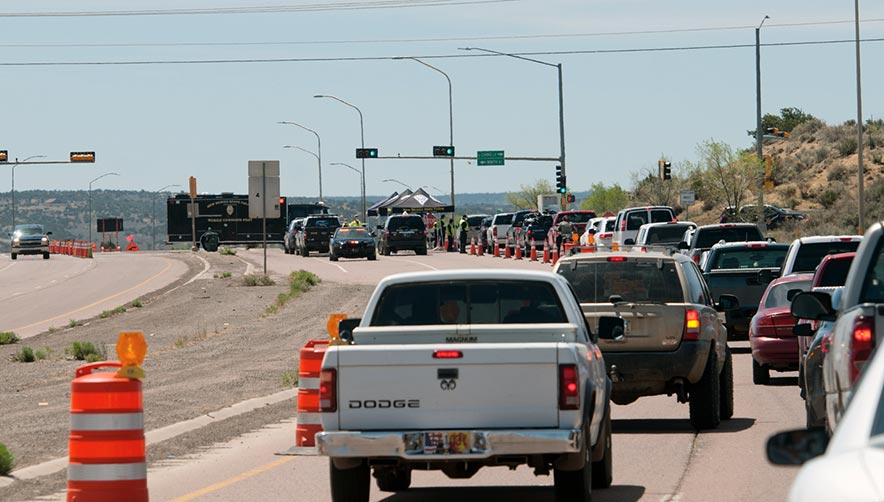 Navajo Times | Donovan Quintero
Traffic driving south on U.S. Highway 491 comes to a stop at a New Mexico State Police checkpoint due to a lockdown that was imposed on Gallup due to the pandemic.

After a year of battling the virus, Gallup seems to be controlling the COVID-19 outbreak – very cautiously.

It was only possible because of the years of planning how to tackle the alcoholism problem that’s existed here for more than a century.

When COVID-19 began, Dr. Jennie Wei with the Gallup Indian Medical Center, back in February of last year, said the hospital knew they “would kind of have to make a lot of important changes.”

“We knew that with our limited resources in Gallup, that we would need to plan ahead if we were going to be hit with COVID,” Wei said on Monday. “Of course, we knew that many families, multi-generationally, live in close proximity to each other. So, we knew that one family member may have to isolate separate from others.”

Wei and other agencies, like police departments, nonprofit organizations, and shelters, were already working together before COVID-19. Because of the teamwork that was established, protocols to quarantine or isolate homeless people and family members were quickly set up.

The bigger challenge, Wei said, was where could COVID positive unsheltered people be housed for up to 14 days to recover safely.

“What we also started to do was ask the community to start making some phone calls to the various local motels in town to see if anyone would be willing to have unsheltered patients there,” she said.

Using funds from the state, the New Mexico Department of Health and the CARES Act, Wei said the hotel quarantine program was created.

Ina Burmeister, with Rehoboth-McKinley Christian Hospital, said the El Rancho Hotel and Motel Six were the first hotels to join the effort.

On March 19, 2020, Wei said the first COVID case was reported in Gallup. Five days later, on March 24, the first patient participated in the hotel quarantine program.

Then in the first week of April, an outbreak involving about 170 people at the Gallup Detox Center occurred.

During an emergency McKinley County Commission meeting on April 13, 2020, when banning alcohol sales at convenience stores was being considered, Wei told the commissioners she did not think that was “the answer.”

“We know a lot of our patients who have moderate to severe alcohol use disorder are dependent on it, if they do not have access to it, it would overwhelm our ICU,” Wei told the county commissioners on April 13. “Alcohol is a deadly disease that we struggle with. They fill our ICUs already regardless of COVID. Currently our ICUs are full with COVID.”

Wei added that Dr. Kevin Foley, executive director for the detox center and NCI, reported, “for the first time that he’s ever seen there were only six or seven people in the detox on Saturday night.”

“What exactly was that?” she asked. “Was that because we have motels now for people who, once they’ve sobered up, they can safely shelter? Was it because of the Navajo Nation curfews over the weekend? Or was it because it worked that NCI has a huge outbreak?”

“Something happened such that there weren’t any people,” she said. “Granted there were still people in our Eds (emergency departments) that were intoxicated, that we had to hold for a little longer, which we did until they detoxed. It was unprecedented the very few people in detox.”

County commissioners eventually voted not to ban alcohol sales in the county.

Newly sworn-in Gallup Mayor Louis Bonaguidi said on Tuesday that former mayor Jack McKinney had included him after he won the mayoral election. The mayor added he and McKinney were in talks with New Mexico Gov. Heather Lujan Grisham. One of their options, he said, was the Riot Control Act.

On April 4, 2020, the Navajo Department of Health reported 17 cases in McKinley County. By April 15, the department reported 170 cases for the county.

“This was the spot that was at the center of that, I mean our numbers have gone from four or five a day all of a sudden, they were up to 30 to 40 a day,” Bonaguidi said. “And nowhere else was having that those kinds of numbers.

“So yeah, we said, ‘Let’s do it,’” he said. “My first day (as mayor), this happened to be the day they brought the state police.

Bonaguidi, who caught the virus in November, was sworn in on April 30. The New Mexico Department of Health reported the number of COVD cases reached 1,027 with 19 deaths in the county.

Bonaguidi said he does not know how he contracted the virus but had to isolate for 12 days after getting the infusion President Donald Trump received.

“The only effect I had basically was for about three days, I was miserable in the sense of like having really bad allergies, my nose ran, my eyes watered constantly,” he said. “And then after the third or fourth day, it really wasn’t that bad. The quarantine was worse than the virus, for me.”

The mayor said he got the first dose of the Pfizer vaccine and was waiting for second one on March 25.

Police still had to provide services despite a global pandemic that seemed to have gone out of control in the city they patrol,” she said, especially the department’s public service officers, who are tasked with of ensuring the unsheltered community was safe.

“That task of having them (public service officers) go in there, following the CDC guidelines of keeping that distance,” Toadlena-Pablo said, “I remember it was like, ‘Don’t get too close if they look like they were sweating,’ or they had a fever. That was one of the big things, and then having to give them thermal temperature readers.”

The fear of contracting the virus also added to the stresses the officers were dealing with, she said.

“That was one of the major things, it was very difficult and different in going into an unknown just like our officers,” Toadlena-Pablo said. “So, really having them to come on in and rely on their self-checks with their supervisor – ‘What do I do I have it or is this allergy or I do I have a cold? Do I have this virus?’

She added that some officers and PSOs have quit since the pandemic arrived in Gallup.

Another problem police encountered was when transporting COVID-negative intoxicated people since the detox was not able to house more than 10 people with no symptoms.

In order to get a hotel room, a person had to be medically referred. Sometimes, people refused to go to a shelter. And if PSOs determined a person can care for themselves and were not COVID positive, Toadlena-Pablo said they would ask if they needed any food, water, a blanket, socks or a jacket.

“I think that McKinley County, and the Navajo Nation and the surrounding area, the Zuni Pueblo, as we’re from this area, that we should really hold our heads up, because we’ve come through a lot,” she said.

“Check on your family, check on relatives, check on friends,” she said. “I think that’s a big thing too, that is our responsibility, that at this time, when we’re coming out of this era of depression.”

Bonaguidi said he “heard” about 52,000 people have been vaccinated in Gallup and the county.

“We’re in it together,” he said. “You know and, so yeah, I feel like in a lot of ways I think it’s a victory. I think we’re, I think we’re doing exceptionally well.”