Clothes are an essential tool for communication. President-elect Buu Nygren said there’s a strategy behind his style. 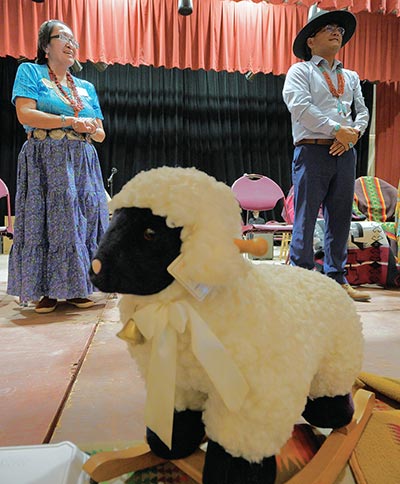 When Nygren announced his bid for the presidency in early April 2022, he wore a seafoam blue button-down long-sleeve shirt, blue dress pants, a brown belt, dootł’izhii/béésh łigaii k’eet’oh, yoo’, and bee ‘ałch’į’ didloh. And a Navajo brim hat (which has become a trend) with a ‘ats’os. And so, it continued.

Nygren wore his outfit during campaign rallies, conferences, presidential forums, events, and appearances. He’s worn this outfit, along with his tsiiyéél, so often that it started to seem like his uniform. Recently, he added a “B” with a brim hat medallion necklace. He said that’s the outfit he’ll wear on Inauguration Day Jan. 10.

“People will recognize that,” he said. “I’ll definitely wear the outfit with my suit jacket and everything.”

He said the only time he wore something different – his doctoral regalia, hood, and tam from the University of Southern California – was during commencement at Diné College and Navajo Technical University.

“That’s probably going to be it,” he said. “It’s going to be the same one. But I don’t plan on wearing it every day.”

“Some people suggested I wear those cuffs (k’eet’oh),” he said. “But I’m trying to be as neutral as possible.”

Buu Van Nygren will become the president of the Navajo Nation at noon next Tuesday in a scaled-back inauguration ceremony – to better adapt the celebration to a Navajo Nation battling Covid – at the Bee Hó?dzil Fighting Scouts Events Center in Fort Defiance, Arizona.

Nygren and his vice president-elect, Richelle Montoya, will also be sworn in at noon. The 25th Navajo Nation Council members and others will be sworn in too. The new president and vice president are then expected to give their inaugural address before an inauguration flyover at 1 p.m. And lunch will be served.

“(There will be) an all-woman color guard bringing in the flags,” Nygren said. “The speaker’s going to be saying a few words. Then there are some presentations––there are a few young people that are going to sing some songs.”

The Nation just elected the tribe’s youngest president, who turned 36 on Christmas Day, an emotional time for him because his late mother, Charlotte Slim Toney, would make him a cake no matter how old he was.

“It’s all going to settle in, just the thoughts of how––my first believer––everything that I’ve done up to this point,” he said. “I really attribute back to my mom for giving me the strength, that willingness, and that belief in me. It’s going to come full circle, and it’ll be very emotional.”

Nygren’s grandmother will attend and believes his mother will be with him in spirit.

“It’s that sense of––(she was) one of my biggest cheerleaders before my wife,” Nygren said about his late mother. “It’ll be different. I know it was emotional when I graduated from USU with my doctorate. My mom not being there.

“I know that she’s known that I’ve always wanted to be president for the longest, longest time,” he said.

Nygren’s daughter, Evelyn Charlotte Nygren, will make her first public appearance since she was born in the fall.

“Evelyn will be there,” he said. “It’s going to be new for everybody, and the whole Navajo Nation’s going to get to see Evelyn for the first time. Jasmine (Nygren’s wife) and I both decided that it’d be good for the people to see Evelyn. We’ll bring her out just for the inauguration.

“I’m looking forward to see how Evelyn reacts because we haven’t really taken her out like that––not rallies or big events.”

Evelyn will be 5 years old after her father’s first term in office. If he decides to run for a second term, she’ll be 9 years old by the time he finishes his second term.

“When Jasmine was pregnant (with Evelyn), she got sworn into the (Arizona) Legislature,” Nygren explained. “So, she’s been in the House. She’s born into (politics).”

“The only one missing might be Peterson Zah,” Nygren said. “I know that he would love to be there.”

Zah has been dealing with health problems.

Nygren will open his first term with an assertive inaugural address, offering to fulfill his service to the Navajo people.

“The message is going to be about getting things done,” Nygren said. “If the (Navajo) president’s going to get in trouble for bringing somebody water, so be it. Put me on national news for that. I think that’s going to be a lot of my approach.

“I’m going to do whatever it takes to get basic services out to our people,” he said. “And if people get in the way and they shed light on me that ‘it doesn’t look good,’ my basic response is always going to be, ‘I’m just here to deliver basic services that every Navajo person’s entitled to across the Nation, and that’s my mission.’”

Nygren said he’ll also say in his speech that the tribe needs to unite as a nation.

“I just want to reassure people that we’re all on this trip together, and we got to do our part,” he said. “I’ll do my best as president to do the same thing.”

Nygren said he’s crafting his cabinet and team of advisers. But in his picks so far, there is one thing they have in common: service in the Nygren-Montoya Administration.

“My hope and goal is I have a full cabinet by the time I get sworn in,” he said. “That way, we can get the ball rolling quickly as possible.”

Nygren said at least 95% of those who applied for a position under his administration are new faces and have never held a division director position.

“I’d say well over 50% have worked for the tribe at some point but not in a leadership capacity,” Nygren said. “There is one or two (from the Nez-Lizer Administration) who applied. But most of them are brand new. Surprisingly, a lot of them are fairly young.”

Nygren will be attending Indian Nations & Tribes Legislative Day Nov. 11, his first full day as president of the Navajo Nation.

“I really want to try and figure out how I can really work with the state of Arizona,” Nygren added, “and really make our roads flourish so we can all enjoy it. Let’s work on that.”

Nygren and Montoya have 48 months before the next presidential campaign kicks on in 2026.