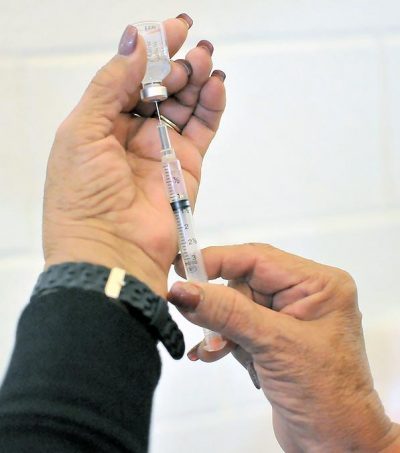 File Photo
A nurse fills a syringe with anti-flu medication in this November 2015 photo. The Gallup Indian Medical Center in Gallup has begun screening people for the coronavirus.

Officials at the Gallup Indian Medical Center have begun screening people wanting to enter their facility.

Along with hospital security, health professionals have set up a table and are stopping everyone and asking if they’re coughing. If a person says “no,” then they enter. If they say “yes,” additional questions are asked, according to people who visited the hospital Monday.

Some patients said their doctors were calling them and telling them not to go to the hospital for their appointments and were given new appointments.

The hospital began the screening process on Saturday in response to the growing coronavirus epidemic that has so far killed 3,800 worldwide and infected more than 108,000, globally.

Officials at the hospital said there are no confirmed cases in New Mexico, but they were taking precautionary measures.

A study by the Annals of Internal Medicine has concluded that a person infected by the coronavirus could develop symptoms in five days.

But the number of cases in the U.S. continues to remain low. President Trump tweeted on Monday that last year’s “common flu” killed 37,000 Americans, compared to coronavirus that Trump tweeted, has so far killed 22 Americans out of 546 confirmed cases. The CDC says there 716 confirmed cases and 26 deaths, so far.

“Nothing is shut down, life & the economy go on. Think about that!” Trump tweeted.

Navajo Nation Council Delegate Amber Crotty said she is “staying in the area” so that she can do what she can to spread the word about the virus.

In addition, she said she was going to refrain from shaking hands, which her constituents agree with.

“I know handshaking is a cultural interaction, but people are OK with not shaking hands,” Crotty said in a phone interview on Monday night.

Crotty said she’s been letting people know they can call a toll free hotline to the San Juan Regional Medical Center in Farmington if they have any questions regarding COVID-19. That number is 888-949-5387.

The tribe’s COVID-19 preparedness team has also been discussing what it would do if the virus reached the reservation.

If it were to reach Navajo Nation borders, the president’s office would transfer $100,000 to the Navajo Nation Department of Emergency Management for planning purposes.

The president’s office sent a letter to the IHS Washington, D.C. office requesting a 45-day quarantine policy for IHS employees who were deployed in a virus “hot-zone.”

In addition, tribal officials would go on the radio to do a two-hour community forum and give Navajo listeners updates and answer questions.

The Council was also considering if they should draft an emergency declaration.

In the meantime, GIMC officials said they would continue screening people for an unknown period of time.