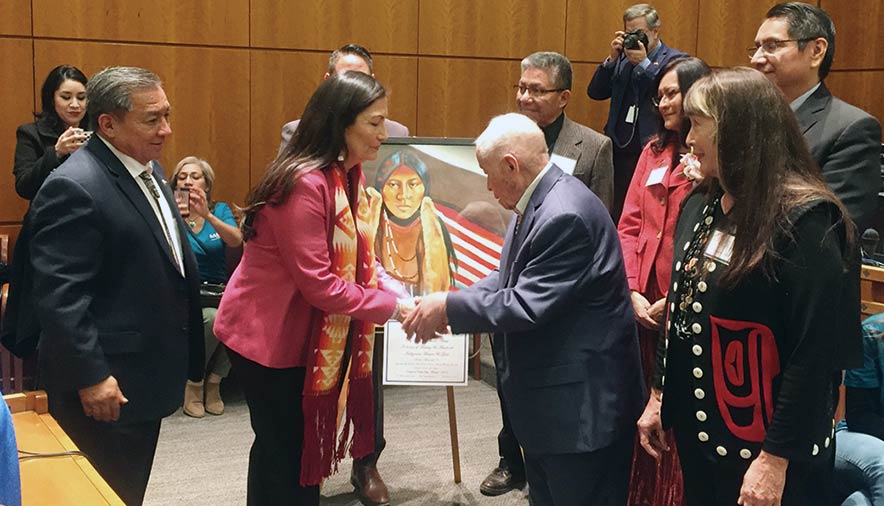 “I was really pleased that the governor continues to prioritize this work for our tribal communities especially on May 5th, the national day of recognition for the missing and murdered,” said Stephanie Salazar, chief counsel for state Indian Affairs Department.

The initial task force created by HB 278 in 2019 was charged with making recommendations to the governor on how to end the violence once and for all.

She received their findings, prepared in partnership with the Native American Budget Policy Institute, last December.

The report, which can be found on the IAD website along with the executive order, gave Lujan Grisham the information she needed.

“Governor Lujan Grisham stepped up with the executive order. It was really important that happened,” said Patricia Michaels, Taos Pueblo, an internationally recognized fashion designer who advocates for the murdered and missing. “This (epidemic) is killing our people and it needs to be stopped. I’m grateful she made it a priority.”

As referenced by the MMIWG task force report:

“There is no sugar coating. This is genocide!” said Michaels.

She added, “I wake up every morning praying for the missing and murdered. It hits me during the day that somebody is being abducted, hurt, traumatized, fighting for their lives. It is so real, you can’t turn a blind eye,” she stressed.

In her executive order, Lujan Grisham recognizes that violence against Indigenous people is entrenched in New Mexico’s history.

She points out that stopping the violence calls for multiple responses — “adequate tribal law enforcement, coordinated communication between Native and non-Native public safety departments to deal with the “complex maze of jurisdictions.”

The governor’s executive order also expands the scope of the task force.

“This is not just a crisis with our women and girls. There are more men that are missing or murdered than there are women,” stated a community member quoted in the task force report.

Boys and members of the LGBTQ2S+ community are also at risk, Michaels pointed out in an interview with the Times in 2019.

Acknowledging how widespread murders and disappearances are in urban areas and on tribal lands, the task force renamed itself the Missing and Murdered Indigenous Women and Relatives Task Force.

Also, under the governor’s order, the original task force increased from 11 members to 40 including state workers, legislators, tribal and urban community reps and staff from justice programs.

“The governor’s order takes the task force to the next step,” Salazar said. “We would like to see strategies (and actions) for long-term continuity of this work.:

Salazar said that even if individuals or organizations are not named in the executive order as task force members, everyone is welcome to help stop the violence, Native and non-Native.

“What we have learned is that the more people we have in the (virtual or face-to-face) room, we’re going to come up with good strategies,” she said.

As a community advocate, Michaels has incorporated raising awareness into her fashion business for years.

In 2019, answering a call from the late State Sen. John Pinto, Michaels designed a themed dress to honor victims and survivors. “Absconding with The Wild Berries” was presented to a packed audience in the rotunda on American Indian Day, Feb. 14.

“This is a terrible tragedy and our state’s investigations must begin now,” he said.

Recently, Michaels unveiled a dynamic fashion exhibit of several garments addressing murders and disappearances at the Dairy Arts Center in Boulder, Colorado.
She encourages other business owners to step up and raise awareness.

“Everybody can do something!” she said.

Giving examples, she suggested messages based on IAD’s findings can be sent out in social media, blended into TV and film scripts, while more survivors speak out and tell their stories.

“I want women to share their stories, which they can do anonymously, so the record shows the patterns and makes a difference,” she suggested.

“I’m spreading the word,” she said.

Salazar added, “New Mexico is a model for other states. Our work has been elevated from the amount of support (the task force) received from our leadership,” referring to support from the governor, the New Mexico legislature and Lynn Trujillo, IAD’s cabinet secretary.

Moving forward, there will be a virtual MMIWR public meeting at the end of June.