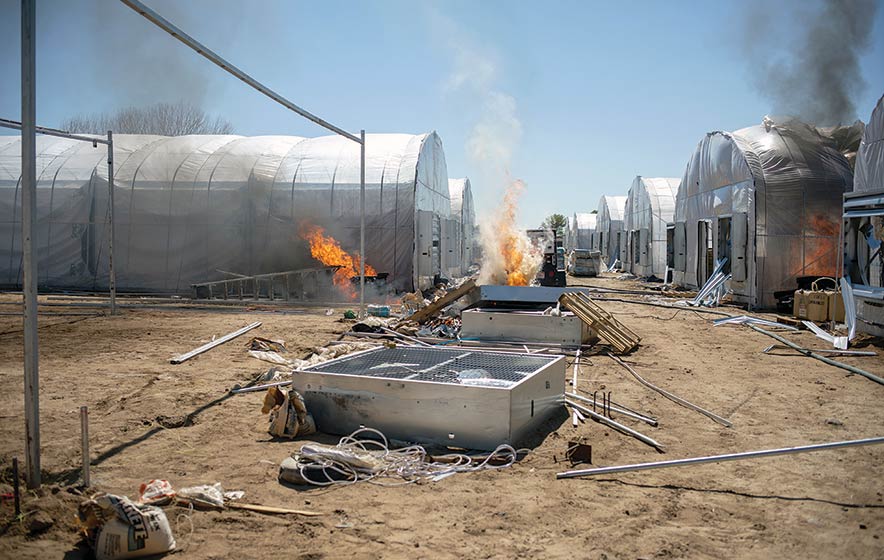 A Monday morning protest against San Juan River Farm Board President Dineh Benally’s hemp farm ended with a fire set to one of his hoop houses. As of Wednesday, police had no suspects in the case.

Tensions have been mounting the entire summer between Benally and a number of residents and farmers who don’t like the extensive hemp fields in their community (see accompanying story).

Police Chief Phillip Francisco was on his way back to Window Rock from the protest when he learned of the fire.

He said Wednesday no suspects have been identified and no new information was available. At least two dozen residents and farmers protested Monday against not only Benally but Navajo and Shiprock leadership, the Navajo Nation Police and the Shiprock District Court, which they feel should have put a stop to Benally’s operation.

Delegates of the Navajo Nation Council have held three radio forums on the topic, and President Jonathan Nez and Department of Justice officials met with a few farmers a couple of weeks ago. But Benally continues to grow hemp on 400 acres in Shiprock, Gadiiahi and Hogback in spite of being warned hemp production is illegal on the Navajo Nation.

The Navajo Nation has filed for a temporary restraining order and preliminary injunction to stop the farming. The court last week denied Benally’s motion to dismiss and a hearing is set for today (Thursday) at 10:30 a.m. Shiprock Chapter President Duane “Chili” Yazzie did not respond to a request for comment by press time. Emails sent to Benally and Jordan also have received no response.

Information: Court documents filed in preparation for today’s hearing are available on the Navajo Nation Department of Justice’s website at http://nndoj.org/press-release.aspx.