Kelsey A. Begaye, the fifth president of the Navajo Nation, a U.S. Army veteran, a humble pastor, and a reformer who once lived on the streets of Los Angeles struggling with addiction, died at 9:15 p.m. on Aug. 13 in Kinłání. He was 70. 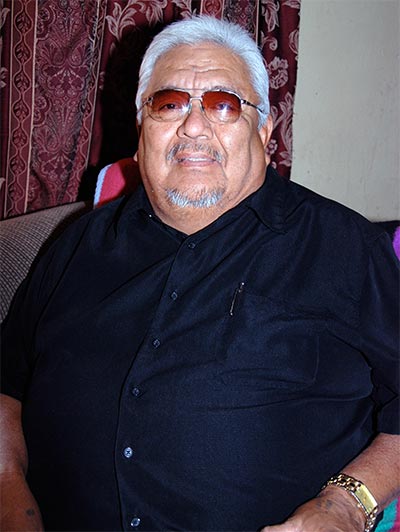 Navajo Times | Krista Allen
Kelsey A. Begaye poses for a portrait inside his home in Kaibeto, Arizona. Begaye served as the fifth president of the Navajo Nation.

His death was announced on Friday night by his family who said he was taken to the hospital for an infection two weeks ago. Because he had congestive heart failure, his physicians didn’t want to risk a surgical treatment for the infection.

He received comfort care until he passed on Friday night surrounded by his family.

“He touched a lot of lives outside his family, outside his community, outside the Nation,” said Begaye’s daughter, Kellie. “It’s been awesome to see how many people who’ve nothing but good things to say – they’ve worked with him and what a positive influence he was on their lives.”

Begaye was born to the late Wallace and Ada Begay. He had two brothers and four sisters.

He is a 1969 Monument Valley High (Kayenta) graduate and attended the College of Ganado, where he studied chemical addictions and received a state certification in 1979.

Begaye enlisted in the U.S. Army in 1969 and served the country for four years as a radio operator in Vietnam.

But his life took a 180-degree turn during his service.

He was stationed in Hai Van Pass. Being there was one of the darkest parts of his life because drugs were readily available to soldiers.

“I was there when I was 19 years old serving as a radio operator,” Begaye said in a final interview with the Navajo Times at his home in Kaibeto. “It was my responsibility to check on all base camps to make sure everything was running smooth. If it wasn’t, it was my duty to inform my superiors.”

When his service was completed, he and his comrades weren’t welcomed home after landing in Ft. Lewis, Washington.

“Rather than getting a ‘welcome home’ celebration of any kind, we ended up dodging raw eggs and tomatoes,” Begaye explained. “People threw them at us, calling us ‘baby killers’ and told us to ‘go home, we don’t want you here.’

“Vietnam veterans were never really – officially – welcomed home,” he added. “So that’s why if you see two Vietnam veterans meet today, they’ll greet then say, ‘welcome home’ to each other.”

His life took a turn for the worse when he ended up living on the streets of Los Angeles struggling with addiction at 24 years old.

“There was a life of darkness, uncertainty, and no purpose, no direction in life – I’d given up,” Begaye said.

“People who use (drugs and substance) are committing slow suicide and I was in that category,” Begaye said. “I lost many good jobs, many good opportunities, and many materialistic things. But most of all, I lost my self-respect.”

This is when he decided to take control of his destiny and go home to the Navajo Nation.

He gave advice to anyone who struggled with drugs and alcohol. He recently celebrated 43 years of sobriety in January 2021.

Begaye was elected to the Navajo Nation Council, representing Kaibeto Chapter in 1991. Then he was elected as speaker of the council in 1996, after which he ran for tribal president – at the advice of the late Buster Nez Sr. from Kaibeto – in 1998, defeating Joe Shirley Jr.

Begaye in July 2011 was given an honorary doctorate degree – from the United Graduate College and Seminary in North Carolina – for his national advocacy in tribal education and health.

Begaye was an ordained minister and served as president of Kaibeto Chapter. He did public speaking and told the Times recently he was working on an autobiography.

“He is a very well-respected man in our community,” Stanley Patterson, pastor of Pure Heart Bible Church in Kaibeto, told Begaye in a statement that was shared with the Times. “He has served the Navajo Nation in more than just the local capacity.”

“He was a great family man,” said Franklin Fowler, president of Kaibeto Chapter. “He raised several children, not just his own. That’s what I really remember about him.

“He worked with every leader in Kaibeto,” he said. “He took (each) one of them under his arms and mentored them … and guided them. That was his kind of leadership. He wasn’t a dictator.”

Fowler added, “His campaign slogan was about unity and that’s what comprises what his leadership was like.

“He grew up here in Kaibeto,” he said. “His mother and father and his ancestors are from here. So, he’s a through-and-through Kaibeto man.”

“To his wife, Marie, and their children,” Nez told the Navajo Times on Saturday evening, “we pray that you take comfort in knowing that your husband and father is now with God.”

Nez said Begaye was a humble and loving person who overcame adversities at a young age and who turned to his faith to become a loving family man.

“A Vietnam veteran and a great leader for his people,” Nez added. “Throughout his lifetime, he drew his strength and determination from his faith and gave back so much to our Navajo people.

“He will be greatly missed,” he said.

Kellie said she and her family have received not only condolences from people who knew him but also listened to stories and saw dozens of social media posts about her father.

One social media post was about members of Begaye’s gospel band, “The Simple Gospel Band,” reuniting in heaven.

Funeral services for Kelsey A. Begaye will take place at 10 a.m. at Pure Heart Bible Church (next to Kaibeto Market in Kaibeto) on Friday, Aug. 20. He will be buried at the Arizona Veterans Memorial Cemetery with full military honors in Bellemont, Arizona, on Tuesday, Aug. 24.

Because of COVID-19 risks and current public health orders, the president’s office and NTUA Choice Wireless will live-stream the funeral service beginning at 10 a.m.

Only 15 people will be allowed inside the church at any one time to pay their final respects and to say their goodbye to Begaye, said Kellie.

A drive-thru reception will take place at Kaibeto Chapter.

A hearse carrying Begaye’s casket will be escorted by the Navajo Nation Police and the honor riders from Tuba City to Kaibeto on Friday, and then escorted to Bellemont.

His family said it would be great if people want to wear something to match those colors.