A federal judge in New Mexico has dismissed a claim filed on behalf of about 240 Navajo farmers along the Animas and San Juan Rivers against the parent company of the Sunnyside Mine, where the contaminated water from the 2015 Gold King Mine spill allegedly originated.

In his April 29 order, Chief U.S. Judge William P. Johnson agreed with defendant Kinross Gold Corp. that the state of New Mexico does not have personal jurisdiction in the matter. 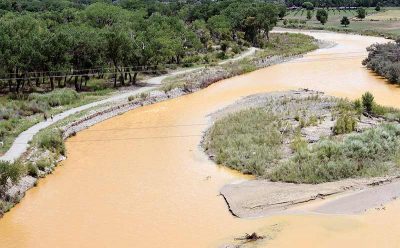 Navajo Times File Photo
A man and a woman, left, walk along the bank of the Animas River and San Juan River confluence in this Aug. 2015 file photo after a spill by the Gold King Mine.

For New Mexico to have jurisdiction over injuries from the spill, which originated in Colorado, Kinross would have had to deliberately direct its activities to residents of New Mexico, and the plaintiffs’ injuries must have arisen out of those activities, Johnson stated in his order.

The farmers argued that although a bulkhead to hold back wastewater was built at Sunnyside before Kinross took ownership of the Sunnyside Mine in 2003, Kinross executives were repeatedly warned by the owner of the downstream Gold King Mine and others that water from Sunnyside was overflowing into the downstream mines and a blowout was possible, but Kinross took no action to remedy the situation.

“Sunnyside knew that a blowout would cause substantial damage to downstream communities in New Mexico and the Navajo Nation,” the plaintiffs stated in their lawsuit.

Between 2011 and 2015, according to the plaintiffs, employees of Kinross prepared a health and safety plan, engaged contractors for sampling, and informed the U.S. Environmental Protection Agency that Sunnyside would donate $10 million to clean up the Animas River (in an attempt, the lawsuit maintains, to ward off the EPA’s declaring the area a Superfund site).

However, the judge ruled these facts do not meet the “purposeful direction” and “arising out of” requirements for personal jurisdiction.

“Activities were not aimed at New Mexico with knowledge that those activities would cause harm in New Mexico,” Johnson wrote. “Nor do they establish that the Allen Plaintiffs’ injuries arose from the Kinross Defendant paying fees, donating money and conducting sampling activities.”

The farmers had further alleged that by filing motions in the New Mexico court, Kinross and Sunnyside had de facto agreed to the court’s jurisdiction, but the judge maintained the motions were part of the discovery process and the companies would have been defying the court’s order if they had failed to file motions defending themselves.

The farmers (collectively known as the Allen plaintiffs, the name of the first listed plaintiff) contend that they suffered a year of lost crops and other damages because of the Aug. 5, 2015, Gold King Spill, which tainted the Animas and San Juan rivers with mining waste and caused canal companies to cut off their water supply for weeks while the situation was being remedied.

Kinross had originally asked for summary judgment in additional claims brought by the states of New Mexico and Utah as well as the Navajo Nation, but ended up settling with those entities.

“As usually happens in these large toxic tort kind of cases, the companies settled with the big entities and the little guy gets caught holding the bag,” said Kate Ferlic of Egolf + Ferlic + Martinez + Harwood, LLC, the law firm representing the farmers. “What this decision really means is that upstream polluters can’t be held accountable to individuals in downstream states.”

Ferlic said the firm plans to appeal, and also has cases pending against the U.S. EPA and its two contractors who inadvertently caused the spill while trying to remedy the situation.

“Hopefully between these cases and the appeal, we can get some relief for our clients,” Ferlic said. “We will keep fighting for Navajo farmers and ranchers.”