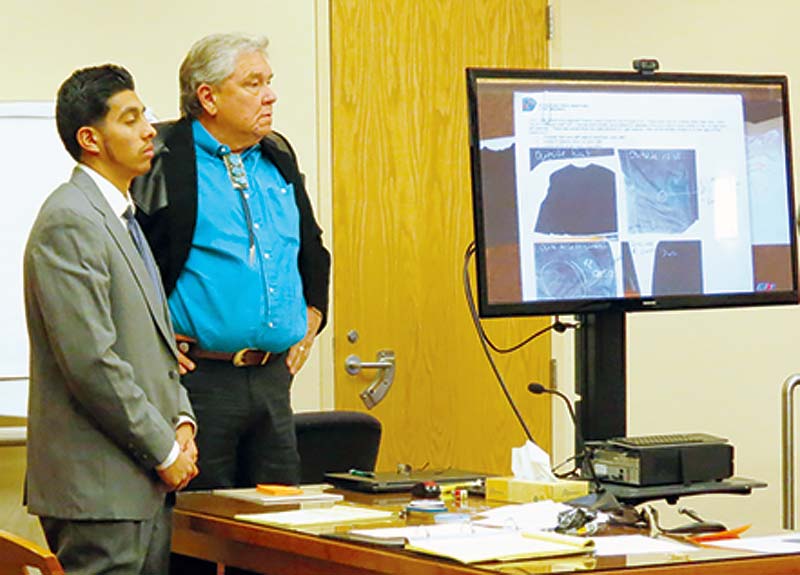 Special to the Times | Colleen Keane As Alex Rios (left) stands next to investigator Dave Becker (right) when the jury leaves for a break, photos of bloodied clothes taken from the crime scene stay on the screen.

Special to the Times | Colleen Keane
As Alex Rios (left) stands next to investigator Dave Becker (right) when the jury leaves for a break, photos of bloodied clothes taken from the crime scene stay on the screen.

After several hours of deliberation Tuesday and into the afternoon on Wednesday, a 12-member jury found Alex Rios guilty on two counts of second degree murder in the beating deaths of Allison Gorman and Kee Thompson, members of the Navajo Nation.

Gorman and Thompson, who were homeless in the city at the time, were found brutally beaten to death in a west side lot a year and a half ago.

Testimony by Gilbert Tafoya, the youngest teen indicted for the murders, seemed to carry the most weight during the four-day trial in Judge Briana Zamora’s 2nd judicial district court room.

Tafoya, now 17, agreed to testify against Rios in exchange for an amenability hearing, which will determine if he is tried as an adult or a youth. If he’s tried as a youth, he could be out of jail in about four years when he turns 21.

Tafoya’s plea deal was attacked more than once during the trial by Rio’s attorney, Daniel Salazar.

“Why would he tell the truth; the truth doesn’t get him out of jail?” questioned Salazar in his closing statements on Tuesday afternoon.

Tafoya’s testimony contradicted Rios’s statements to police that he was only a bystander and the most that he had done was push and kick either or both of the victims when they were awoken and tried to fight back.

In a taped police interview that was shown in court, Rios also admitted to picking up a tree branch, which he said he considered using to beat the men, but didn’t.

But Tafoya testified that Rios actively joined in on beating Thompson and Gorman to death. Both men were beaten so badly, police said that it was one of the worst crime scenes they have ever seen.

Taking the witness stand during the trial, the pathologist who did the autopsy on Thompson stated that Thompson was beaten on every part of his body and a knife had gone through his heart.